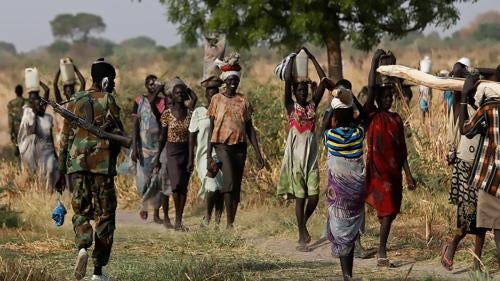 Since the start of the conflict, almost 2 million people have been internally displaced, and another 2 million have sought refuge in neighboring countries, with 1 million in Uganda alone. More than 230,000 people are sheltering in six United Nations bases in towns across the country. Famine was declared in conflict-affected areas in the former Unity state in the first half of the year.

The war began as a political conflict between President Salva Kiir and his then Vice President Riek Machar in December 2013. A power sharing agreement, signed between the two parties in August 2015, did not end the fighting; following clashes in Juba in July 2016, Machar went into exile, where he remains.

Both sides have committed abuses that qualify as war crimes, including looting, indiscriminate attacks on civilians and the destruction of civilian property, arbitrary arrests and detention, beatings and torture, enforced disappearances, rape including gang rape, and extrajudicial executions. Some abuses may also constitute crimes against humanity.

Lack of accountability continued to fuel the violence, while progress on establishing the hybrid court envisioned in the 2015 peace agreement was slow. The United States imposed sanctions on three government officials in September.

A range of human rights abuses took place during fighting in the former states of Upper Nile, Jonglei, Western Bahr el Ghazal, and in the Equatorias.

ELIZABETH’S STORY
Elizabeth, like so many South Sudanese we interviewed in northern Uganda this year, was attacked by government’s soldiers in early 2017...

Elizabeth, like so many South Sudanese we interviewed in northern Uganda this year, was attacked by government’s soldiers in early 2017. “The soldiers came close to the house around 4 p.m.…I was cooking at home when my son told me that soldiers had come. My husband Kristofer went outside the house to check. They shot him,” she recounts. When the two sons went to go check on their father, they too were shot dead. Elizabeth tried to run away but one of the soldiers caught her, twisting her arm and breaking it. Elizabeth managed to flee and hid in a nearby riverbed for four days, eating soil to survive. Her arm never healed.

Over the last two years, South Sudan’s war spread across the country as the army carried out brutal counterinsurgency operations targeting rebel factions across the southern Equatoria region. Hundreds of thousands of civilians fled to neighboring Uganda and now live in sprawling refugee settlements, unsure when they will be able to return. Elizabeth is now one of them. After discovering that her village had been abandoned, she made her way with her three remaining children and her mother to one of the settlements. Now she worries daily about how she will provide for her family on her own, and with the use of only one arm.

Starting in January, government forces conducted a series of offensives in Upper Nile, with soldiers attacking ethnic Shilluk villages and towns, killing civilians, burning and looting homes, and forcing tens of thousands to flee the areas to opposition areas or to Sudan. Many were stranded at Aburoc, a town north of Kodok. Fighting in and around Pagak, in Jonglei, forced thousands to flee to Ethiopia.

In April, following clashes near Wau town and ambushes by opposition fighters, government forces attacked ethnic Fertit and Luo civilians in Wau town, killing at least 16 and forcing thousands to seek shelter at a displaced persons camp adjacent to the UN peacekeeping mission’s base.

The same month, government soldiers killed at least 14 civilians during an attack against the town of Pajok, in Eastern Equatoria. Throughout the year, government forces also conducted highly abusive counter-insurgency operations across the Equatorias, causing hundreds of thousands of people to flee to Uganda.

The UN described South Sudan as one of the world’s most dangerous places for aid workers—at least 83 killed since the conflict started in December 2013, with 16 in 2017 alone. In March, six aid workers were killed during an ambush on a convoy destined for Pibor. In September, a driver for the International Committee for the Red Cross was killed in the former state of Western Equatoria, prompting the organization to suspend operations there. Both sides obstructed delivery of aid—notably in famine affected areas of Unity and in Upper Nile—and attacked and looted humanitarian supplies and valuables in dozens of locations.

Both government troops and opposition fighters were implicated in sexual violence against civilians in several locations, especially in and around Yei and Kajo Keji in the former state of Central Equatoria.

In April, the UN secretary general’s report on conflict-related sexual violence noted a marked rise in cases of sexual violence by men in uniforms in South Sudan over the last two years, suggesting an increase in frequency as the conflict persists.

Little was done to hold soldiers accountable for sexual violence. Charges of rape of foreign aid workers are included in the ongoing trial of government soldiers for crimes committed during a July 2016 attack on an international humanitarian compound.

In August, South Sudanese authorities announced they had released 30 political prisoners since May; but during operations in the Equatorias, security forces arrested and detained individuals because of their perceived opposition to the government. Human Rights Watch documented clear patterns of arbitrary detention, abuse and torture by government forces since the conflict began.

In January 2017, a prominent lawyer, rights activist and civil society leader, Dong Samuel, and opposition humanitarian affairs officer, Aggrey Idri, were abducted and detained in Nairobi, Kenya, and forcibly deported to South Sudan. Kenyan authorities and South Sudanese authorities have denied knowledge of their fate, but credible sources told Human Rights Watch the men were detained in South Sudan. Their case amounts to an enforced disappearance, prohibited in all circumstances under international law.

The government brought charges against James Gadet Dak, a former spokesman for Machar’s rebel group who had refugee status, for his public criticism of the government. He was forcibly deported from Kenya in late 2016 in violation of international refugee protections and detained in Juba.

Restrictions on Freedom of Expression

Authorities harassed, detained, and interrogated journalists and editors. In July, the head of the state television was arrested for not broadcasting a presidential speech. The same month, authorities blocked at least four websites for publishing “subversive” information. In September, former newspaper editor Nial Bol told media that he narrowly escaped an attack by two government soldiers who raided his home in Juba.

South Sudanese authorities restricted international journalists from covering the conflict, including by refusing to grant them visas or accreditation, and accusing them of publishing articles critical of the government. The government blocked numerous independent online news sites, including Sudan Tribune.

In August, an American journalist was killed in fighting while embedded with opposition rebels in the town of Kaya, bordering Uganda. The government initially accused him of fighting with the rebels.

Implementation of the 2015 peace agreement effectively stalled, and the government used repressive tactics to silence opponents. In January, a year after a controversial decree created 28 states, President Kiir created four more states, bringing the number to 32. The creation of new states has contributed to inter-communal tensions in several locations.

In March, Kiir replaced legislators aligned with former Vice President Riek Machar with those aligned with Taban Deng Gai, whom Kiir appointed as first vice-president in the transitional unity government in July 2016. Riek Machar remained in exile at time of writing.

In May, Kiir sacked Paul Malong, the army chief of staff, and placed him under house arrest in Juba. Malong was allowed to leave the country in November, following a standoff between the army and his guards. A former deputy chief of staff, Lt. Gen. Thomas Cirillo, resigned in February, accusing the government of “ethnic cleansing,” and started a new armed rebel movement, the National Salvation Front, which fought against Sudan People's Liberation Movement-in-Opposition forces in Central Equatoria.

Kiir launched a national dialogue process in May over objections from key opposition figures who declined to join. Kiir also announced plans to hold elections in 2018, originally slated for 2017 despite UN and Africa Union (AU) warnings that the country’s conflict and conditions are not conducive to holding a free and fair election.

The government did little to end widespread abuses against civilians, or investigate and hold accountable individuals and commanders. Government investigations into violent episodes since the beginning of the conflict rarely led to credible prosecutions for human rights abuses.

The army established a court martial to try 13 soldiers for gang rape and other crimes committed during an attack on an international humanitarian compound in Juba in July 2016. The trial is a test of the government’s commitment to accountability for human rights violations.

In July, a meeting of South Sudanese and AU officials in Juba to plan for the hybrid court was a step toward ensuring justice for the most serious crimes committed during the country’s conflict, but much remains to be done. The government adopted a memorandum of understanding with the AU, but it had not endorsed the court’s statute at time of writing.

In June, the regional Inter-Governmental Authority on Development, IGAD, embarked on efforts to “revitalize” the 2015 Agreement on Resolution of Conflict in South Sudan, ARCSS, which it had brokered with support from the US, United Kingdom, Norway, and the European Union.

In March, the UN Human Rights Council renewed and strengthened the mandate of the Commission on Human Rights in South Sudan, tasking it with gathering evidence and determining responsibility for violations with a view to providing accountability. The UN Mission in South Sudan, UNMISS, sheltered over 230,000 civilians in six sites, the highest number since the crisis started.

A UN “Regional Protection Force,” mandated in the summer of 2016 by the UN Security Council, to protect Juba, began to deploy in August.

In September, the US imposed sanctions on three government officials: the former chief of staff, the army’s deputy chief of staff, and the minister of information. The US also sanctioned three companies owned or controlled by former vice president Machar, and warned of UN sanctions and a UN arms embargo. However, Russia and China opposed the idea, along with other members of the Security Council, including from Africa. In November, Canada imposed sanctions on the same three government officials.

On May 18, the European Parliament adopted a resolution on South Sudan condemning abuses, including sexual violence and use of child soldiers, calling for accountability and supporting the establishment of a hybrid court. The European Parliament called on the EU to pursue an international arms embargo. The Troika and EU condemned government abuses.