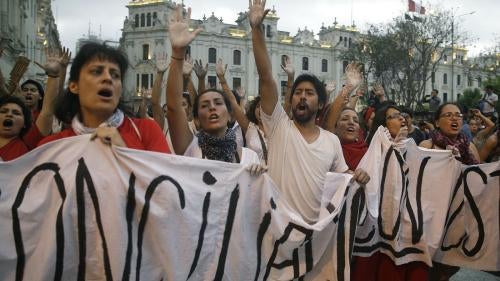 In recent years, security forces have repeatedly wounded and killed civilians when responding to occasional violent protests over mining and other large-scale development projects. These killings have steeply decreased since 2016. 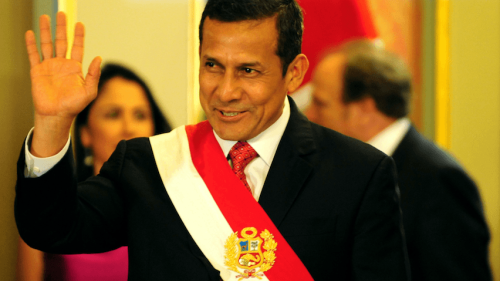 Authorities have achieved limited progress in prosecuting wartime abuses by government forces, in part due to lack of collaboration from the Defense Ministry. According to Peruvian human rights groups, prosecutors had only achieved rulings in 78 cases related to abuses committed during the armed conflict, as of May 2017, and only 17 convictions.

Since May, new evidence has become public corroborating longstanding allegations that former President Humala ordered egregious human rights violations committed by security forces in the early 1990s in the Madre Mía military base in the Alto Huallaga region. The evidence—including testimony from victims, witness, and soldiers involved in the abuses—strongly implicates Humala in crimes including torture, enforced disappearances, killings, and an attempt to conceal incriminating evidence when he ran for president in 2006. At time of writing, Humala remained under investigation for the abuses, and in pretrial detention on corruption charges.

Efforts to secure the early release of former President Alberto Fujimori gained strength during 2017. Fujimori was sentenced in a landmark trial in 2009 to 25 years in prison for killings, enforced disappearances, and kidnappings committed in 1991 and 1992. In May, Keiko Fujimori, his daughter and the runner-up in the 2016 tight presidential elections won by Pedro Pablo Kuczynski, filed a motion seeking to overturn her father’s conviction for kidnappings. A Lima court rejected the motion, but her appeal remained pending at time of writing.

In June, President Kuczynski told The Economist that the time to secure Fujimori’s release from prison was “about now.” Although the president denies it, his announcement seemed to be a reaction to growing pressure from Fujimori supporters who control the country’s Congress under the lead of Keiko Fujimori.

In 2016, prosecutors decided to close the investigation of Alberto Fujimori in connection with forced sterilizations of mostly poor and indigenous women committed during his administration. An appeal brought by victims’ lawyers remained pending at time of writing. A national registry of victims of forced sterilizations committed between 1995 and 2001, was created in 2015 and more than 4,700 victims had been registered at time of writing.

Fujimori’s intelligence advisor, Vladimiro Montesinos, three former army generals, and members of the Colina group—a state-sponsored death squad—are also serving sentences ranging from 15 to 25 years for the 1991 assassination of 15 people in the Lima district of Barrios Altos, and for six “disappearances.”

Courts have made much less progress in addressing violations, including extrajudicial killings, disappearances, and torture, committed during the earlier administrations of Fernando Belaúnde (1980-1985) and Alan García (1985-1990).

In recent years, security forces have repeatedly wounded and killed civilians when responding to occasional violent protests over mining and other large-scale development projects. These killings have declined since 2016. Between July 2016, when President Kuczynski took office, and July 2017, security forces shot dead three protesters, according to human rights groups. Since 2006, security forces have reportedly killed more than 130 people during protests throughout Peru.

In August 2015, then-President Humala issued a decree that limited the use of force by police. Under the decree, police are permitted to employ lethal force only when it is “strictly necessary” in the face of a “serious and imminent risk” of grave harm. However, Law 30151, passed in January 2014, still grants legal immunity to “armed forces and police personnel who in fulfillment of their duty and using their weapons or other means of defense, cause injury or death.” This amendment to the criminal code eliminated language that made immunity conditional on police using lethal force in compliance with regulations. The law may make it impossible to hold accountable police officers who use lethal force unlawfully.

In 2016, the Interior Ministry announced an investigation into a group of 28 policemen, including a general, who had allegedly carried out at least 20 extrajudicial killings between 2009 and 2015, and falsely reported the victims as criminals killed in combat, in order to receive promotions and awards. At least 11 policemen were awaiting trial for these crimes at time of writing.

In November 2016, according to media reports, gunmen broke into the Camaná radio station in the southern state of Arequipa where Hernán David Choquepata Ordoñez was hosting his regular show, and shot him dead while he was on the air.

In February 2017, unknown men attacked journalist Marco Bonifacio Sánchez in the northern state of Cajamarca. The Institute of Press and Society (IPYS) in Peru, a respected nongovernmental organization (NGO) that monitors press freedoms, reported that the men beat him, forced him to get into a vehicle, and tried to cut out his tongue.

In March, a court in Lima convicted human rights lawyer and former prosecutor Ronald Gamarra of defamation and sentenced him to a suspended year in prison and ordered him to pay more than US$3,000 in compensation to Luz Guzmán. Gamarra had written a magazine piece in 2015 in which he alleged that Guzmán, a member of the National Council of Magistrates, had voted in favor of naming Mirtha Chenguayén as a prosecutor, and that Chenguayén then dropped a pending investigation against Guzmán for forging documents.

Gender-based violence is a significant problem in Peru. More than 382 women were victims of “femicides” (the killing of a woman in certain contexts, including domestic violence and gender-based discrimination) or attempted “femicide” in 2016, according to official statistics. Courts in Peru convicted 54 people for “femicide” between January 2015 and March 2016.

In August 2017, thousands demonstrated in Lima and other cities as part of the massive movement to call on authorities to do more to curb gender-based violence.

Women and girls in Peru have the right to access abortions only in cases of risk to their health or lives. In August, the human rights ombudsman’s office asked the government to ensure an “integral attention and accompaniment” to a 10-year old girl in the city of Jaén who was pregnant and facing a risk to her life as a result of rape. A bill introduced in October 2016 to decriminalize abortion in cases of rape and if the fetus suffers severe conditions not compatible with life outside the womb remained pending in Congress at time of writing. But also pending in Congress remained a bill that would recognize the “right” of the fetus conceived as a result of rape to receive “protection from the state” until it is “adopted.”

Same-sex couples in Peru are not allowed to marry or engage in civil unions. In February, a group of lawmakers introduced a bill to legalize same-sex marriage. It remained pending in Congress at time of writing.

People in Peru are required to appear before a judge in order to revise the gender marker noted on their identification documents. In an August 2016 report, the human rights ombudsman noted that courts had rejected most of these requests, often applying inconsistent criteria. A bill allowing people to revise the gender noted on their identification documents without prior judicial approval remained pending in Congress at time of writing.

In May, opposition lawmakers in Congress abrogated a penal code reform supported by President Kuczynski that specifically sanctioned discrimination and crimes committed on the basis of sexual orientation or gender identity.

In July 2017, the UN Working Group on Business and Human Rights visited Peru. The experts noted that the high number of social conflicts in the country “suggests a failure of existing strategies to prevent and mitigate adverse human rights impacts related to foreign direct investment.”

In November, the UN Human Rights Council released its draft report on the third cycle of Peru’s Universal Periodic Review (UPR). Its recommendations included guaranteeing proportionate use of force by security forces, decriminalizing abortion, and ensuring justice for serious abuses committed during the armed conflict.

President Kuczynski has played a leading role in regional efforts to help address the human rights crisis in Venezuela. In August, his government convoked a meeting at which foreign affairs ministers of 12 nations signed the Lima Declaration—a comprehensive statement that condemns the rupture of democratic order and the systematic violation of human rights in Venezuela.