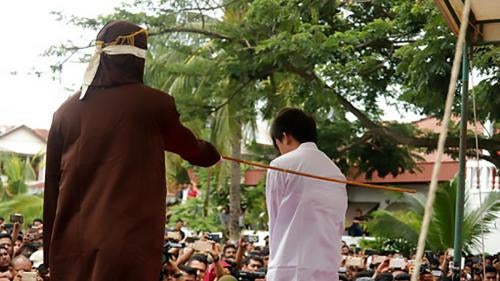 Indonesian President Joko “Jokowi” Widodo’s government took small steps in 2017 to protect the rights of some of Indonesia’s most vulnerable people. In September, the Attorney General’s Office announced that it had rescinded a job notice that not only barred lesbian, gay, bisexual, and transgender (LGBT) applicants, but suggested homosexuality was a “mental illness.” The government also quietly reduced its population of Papuan political prisoners from 37 in August 2016 to between one and five in August 2017.

The government’s acquiescence in 2017 to generals and powerful thugs who seek to stifle discussion of the army-led 1965-66 massacres made Jokowi’s promised reconciliation mechanism for those atrocities appear increasingly unlikely. Jokowi and senior police generals also advocated adopting Philippine President Rodrigo Duterte’s approach to suspected drug users and dealers: shoot-to-kill orders that have been accompanied in the Philippines by more than 12,000 summary executions of suspects.

Following a 2016 deluge of government-driven anti-LGBT rhetoric, authorities in 2017 continued to target private gatherings and LGBT individuals—a serious threat to privacy and public health initiatives in the country.

On May 9, a Jakarta court sentenced former Jakarta governor Basuki “Ahok” Purnama, a Christian, to a two-year prison sentence for blasphemy against Islam. That conviction followed the success of Islamist militant groups in making his blasphemy prosecution a centerpiece of efforts to defeat him in Jakarta’s gubernatorial election in April 2017.

On August 21, Siti Aisyah, the owner of an Islamic school in Mataram, Lombok Island, was sentenced to 30 months in prison on blasphemy for “strange teachings.” In August, municipal governments in Java took steps to effectively shut down two mosques that espoused the ultra-conservative Wahabhi strain of Islam—Al Arqom mosque in Pekalongan and the Ahmad bin Hanbal mosque in Bogor—due to concerns that they could fuel “social turmoil.”

In a landmark ruling in November, the Constitutional Court struck down a law prohibiting adherents of native faiths from listing their religion on official identification cards. The ruling will help protect adherents of more than 240 such religions from prosecution under Indonesia’s dangerously ambiguous blasphemy law.

In early 2017, the Ministry of Religious Affairs drafted a religious rights bill that would further entrench the blasphemy law as well as government decrees making it difficult for religious minorities to obtain permits to construct houses of worship. The draft law, still pending at time of writing, would also impose excessively narrow criteria for a religion to receive state recognition.

On April 5, the Constitutional Court ruled that the central government could no longer repeal local Sharia (Islamic law) ordinances adopted by local governments in Indonesia. It deprived the Home Ministry of the power to abolish ordinances that threaten universal rights to freedom of expression and association and violate the rights of women and LGBT people.

On July 12, President Jokowi issued a decree amending the law that regulates nongovernmental organizations, enabling the government to fast-track the banning of groups it considers “against Pancasila or promoting communism or advocating separatism.” Pancasila, or “five principles,” is Indonesia’s official state philosophy. Days later the government used the decree to ban Hizbut ut-Tahrir, a conservative Islamist group that supports the creation of a Sharia-based Islamic caliphate.

Indonesia's official Commission on Violence against Women reports that there are hundreds of discriminatory national and local regulations targeting women. They include local laws compelling women and girls to don the jilbab, or headscarf, in schools, government offices, and public spaces.

Indonesian female domestic workers in the Middle East continue to face abuse by employers, including long working hours, non-payment of salaries, and physical and sexual abuse. Indonesia’s ban on women migrating for domestic work in the Middle East, imposed in 2015, has led to an increase in irregular migration of women seeking such work, increasing the risk of abuse and exploitation.

In March 2017, the Indonesian government loosened its tight controls on visits by foreign observers to Papua, allowing Dainius Pūras, the United Nations special rapporteur on the right to health, to make a rare two-day visit. But foreign journalists seeking to report from Papua continue to face harassment, intimidation, and deportation despite Jokowi’s May 2015 commitment to lift the restrictions.

In March, Indonesian authorities deported French journalists Jean Frank Pierre and Basille Marie Longchamp from Timika. On May 11, six Japanese journalists were arrested and deported while filming in Wamena without reporting visas.

In September, a police ethics panel inquiry ruled that four police officers were guilty of “improper conduct” when they deliberately opened fire on Papuan protesters in the Deiyai region on August 1, killing a young man. The panel ruled that their punishment should be limited to demotions and public apologies rather than criminal prosecution.

On April 30, police raided a private gathering of gay men in Surabaya, arrested and detained 14 men, and subjected them to HIV tests without their consent.

On May 21, police raided the Atlantis club in Jakarta, arrested 141 men, and charged 10 for holding an alleged gay sex party. Officers allegedly paraded the suspects naked in front of media and interrogated them still unclothed, a claim the police deny.

On May 23, Aceh, Indonesia’s only province that implements Sharia, flogged two gay men each 83 times. The two, ages 20 and 23, were found in bed together by vigilantes who entered their private accommodation in March. This was the first caning of gay men in Indonesia.

On June 8, government officials in Medan apprehended five “suspected lesbians” and ordered their parents to supervise them—then shared a video of the raid and the names of the five women with reporters.

On September 2, police and local government officials unlawfully raided the homes of 12 women in Bogor, West Java, alleging they were “suspected lesbians.” Police recorded the women’s personal details and ordered them to relocate from the area within three days.

In August, Indonesian police and military personnel forced the cancellation of a public workshop on financial compensation for victims of the state-sanctioned massacres of 1965-66, in which the military and military-backed militias and vigilantes killed an estimated 500,000 to 1 million people. Victims included suspected members of the Communist Party of Indonesia (PKI), ethnic Chinese, trade unionists, teachers, activists, and artists. Security forces “interrogated and intimidated” organizers, claiming they lacked a permit.

On September 16, authorities prevented the Jakarta Legal Aid Institute from hosting a seminar about the massacres. Police and military officers surrounded the compound, preventing participants from entering the building on the pretext that the organizers lacked a permit for the gathering.

Thousands of children continue to perform hazardous work on tobacco farms. They are exposed to nicotine, toxic pesticides, and other dangers, which can have lasting impacts on health and development.

The government pledged to eradicate child labor by 2022. In meetings with Human Rights Watch in late 2016 and 2017, government officials said they had begun activities to raise awareness about the health risks to children of tobacco farming. However, authorities have not changed laws or regulations to protect children from hazardous work on tobacco farms.

Despite a 1977 government ban on the practice, families and traditional healers continue to shackle people with psychosocial disabilities, sometimes for years at a time. Enforcement of the ban has been long delayed, but in 2017 the government announced steps to improve access to mental health services, a key component of its campaign to eliminate shackling.

Health ministry officials claim that in 2017 the government accredited about 2,000 community health centers, certifying their capacity to respond to 155 conditions including psychosocial disabilities, and oversaw the training of some 25,000 trainers, people who are to in turn train primary health staff on improved responses to and community outreach around a range of health issues, including mental health.

In April, UN Special Rapporteur on Health Dainius Pūras urged the government to scale-up its campaign against shackling and ensure it is not replaced by other forms of restraint that violate human rights.

On July 20, National Police Chief Gen. Tito Karnavian called for combating drugs in Indonesia by shooting drug dealers. The next day, President Jokowi issued an order instructing police who encounter foreign drug dealers who resist arrest to “Gun them down. Give no mercy.”

According to a University of Melbourne analysis, Indonesian police killed an estimated 49 suspected drug dealers in the first six months of 2017, a sharp rise from the 14 such killings in all of 2016 and 10 in all of 2015.

In September 2017, Indonesia rejected 58 human rights recommendations made by United Nations member states as part of Indonesia’s Universal Periodic Review before the UN Human Rights Council. The recommendations targeted issues including threats to the rights of LGBT people, the abusive blasphemy law, and the death penalty. An Indonesian Ministry of Foreign Affairs official responded weakly, describing the recommendations as “hard to accept” given “Indonesian conditions.”

On July 14, Indonesia announced that it was renaming a part of the South China Sea the “North Natuna Sea.” The newly named body of water encompasses a region of the sea north of Indonesia’s Natuna Island that partly falls within the infamous “nine dash line,” marking the area of the South China Sea that China claims as its own. The Chinese government has condemned the renaming as “not conducive to the effort of the international standardization of the name of places.”

In September, Indonesia took the initiative to provide humanitarian aid to ethnic Rohingya refugees along the Burma-Bangladesh border. Jokowi deplored the violence against the Rohingya and dispatched his foreign minister, Retno Marsudi, to meet with Burmese de facto leader Aung San Suu Kyi to express Indonesia’s concern about the Rohingya’s plight.

In October, the National Security Archive, a US nongovernmental public transparency organization, released 39 declassified documents from the US Embassy in Jakarta that show US diplomatic personnel were fully aware of army-orchestrated mass killings as they were unfolding in late 1965 and early 1966 in Indonesia. The documents underscore the need for the US and Indonesian governments to fully disclose all related classified materials to provide an accurate historical record of the killings and to provide justice for the crimes.