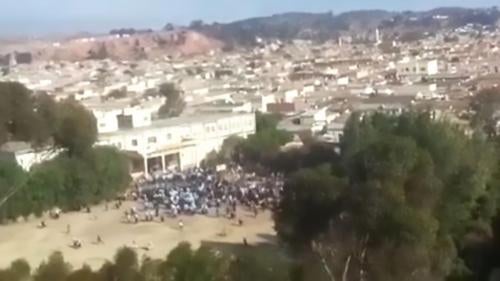 Eritrea remains a one-man dictatorship under President Isaias Afewerki, now in his 26th year in power. It has no legislature, no independent civil society organizations or media outlets, and no independent judiciary. The government restricts religious freedoms, banning all but four groups.

Every Eritrean must serve an indeterminate period of “national service” after turning 18, with many ending up serving for well over a decade. Some are assigned to civil service positions, while most are placed in military units, where they effectively work as forced laborers on private and public works projects.

Largely because of the oppressive nature of the Isaias rule and the prolonged national service, about 12 percent of Eritrea’s population has fled the country. In 2016 alone, 52,000 escaped, according to the latest United Nations High Commissioner for Refugees (UNHCR) report.

In June, the United Nations special rapporteur on Eritrea reported to the Human Rights Council that there can be “no sustainable solution to the refugee outflows until the government complies with its human rights obligations.” The council echoed her call for reform in a resolution calling on Eritrea to end indefinite conscription and forced labor. It also urged the African Union (AU) to investigate government abuses so that perpetrators can be brought to justice.

Abuse in national service is rampant and is the principal reason why thousands flee the country annually. Service lasts over a decade although the proclamation establishing national service limits conscription to 18 months. A UN Commission of Inquiry in 2016 characterized the system as “enslavement.”

Conscripts are subjected to 72-hour work weeks, severe arbitrary punishment, rape by commanders if female, and grossly inadequate food rations. Pay increased after 2014, but deductions for food limited the increase, and net pay remained inadequate to support a family.

Freedom of Speech, Expression, and Association

President Isaias, freed from all institutional restraints, uses well-documented tactics of repression, showing little signs of easing up in 2017. The populace is closely monitored. Offenses include seeming to question authority attempting to avoid national service or to flee the country, practicing an “unrecognized” religion, or simply offending someone in authority. After witnessing the ordeal family members and others face when trying to exercise their rights, ordinary citizens have come to realize they are not allowed any rights.

Eritreans are subject to arbitrary imprisonment. Arrest and harsh punishment including torture, are at the whim of security force commanders without trial or appeal. Few are told the reason for their arrests. Imprisonment is indefinite and often incommunicado; some arrestees disappear altogether. For example, an individual was arrested and held since 2002 but never charged and not allowed visits or other communications with his family for 15 years. His body was released to his family in August.

The government issued a new criminal procedure code in 2015 but its significant procedural safeguards, requiring warrants for arrest, access to defense counsel, and the right to habeas corpus petitions, remain largely unimplemented.

In September 2001, the government closed all independent newspapers and arrested their editors and leading journalists. None were brought to trial. They remain in solitary detention. There are reliable reports that about half of them had died. In May 2017, Dawit Isaac, not seen since 2005, received United Nations Educational, Scientific and Cultural Organization’s World Press Freedom Prize.

Eleven former high-level officials who criticized Isaias’s rule have also been imprisoned and held incommunicado since 2001. Eritrea has ignored calls by the African Commission on Human and Peoples’ Rights and the Human Rights Council to release them or at least bring them to trial.

After a former minister defected in 2012, Isaias had his then-15-year old daughter, a United States citizen, his 87-year-old grandfather, and 38-year-old son arrested. All three remain jailed without trial.

In 2002, Eritrea required all religious groups to register but refused to register any except Sunni Islam and the Eritrean Orthodox, Roman Catholic, and Evangelical (Lutheran) churches.

The government exercises strict control over these religious groups. It deposed the Eritrean Orthodox patriarch in 2006, placed him under house arrest, and imposed a successor on the church. In July 2017, the octogenarian former patriarch was brought to a church service for the first time in 11 years but not allowed to speak. A contemporaneous church announcement blamed the patriarch for association with heresy but claimed the “issue” had been resolved. He has not been seen since.

Reliable sources reported as many as 170 arrests of Evangelical Christians in May to June alone. Some reportedly were sent to an infamous Red Sea Dahlak Island prison. It has become usual in Eritrea for security personnel to raid private homes where devotees of unrecognized religions meet for communal prayer. Repudiation of their religion is typically the price of release.

In October, the government suppressed protests by students at a private Islamic school in Asmara, Al Diaa, against a planned government takeover. The protests were triggered by the arrest of the school’s nonagenarian honorary president after he objected to the takeover. Arrests of other school officials followed. The government had previously announced it planned to convert all religious schools into government-administered institutions.

Jehovah’s Witnesses remain especially persecuted. As of August, 53 were imprisoned for attending religious meetings or for conscientious objection, including three arrested over 23 years ago, in 1994.

Fleeing Eritreans faced increased hostility in several countries. Sudan forcibly returned over 100 asylum seekers, including about 30 minors, to Eritrea in 2017. UNHCR criticized the expulsions as “a serious violation of international refugee law.” In 2016, Sudan had repatriated 400 Eritreans who were promptly arrested upon their return, according to a UN Commission of Inquiry report. Whether any have been released since is speculative because of government secrecy and the absence of independent monitors.

Until early 2013, Israel prevented tens of thousands of Eritreans from lodging asylum claims. As of end of 2015, Israel had recognized only five Eritrean asylum seekers as refugees. It has tried to coerce others to leave by imprisoning, or threatening to imprison indefinitely, those who refuse to leave “voluntarily.” In August 2017, the Israeli High Court of Justice held that authorities could detain those who refuse to leave for no longer than 60 days. The justice minister immediately proposed amending Israeli law to circumvent the court decision.

A Swiss court held in 2017 that an Eritrean woman who had not proved she had deserted national service could be presumed not to face punishment on return. The UN special rapporteur on migration criticized a similar earlier Swiss court decision because the court had no real evidence that involuntary returnees would not be prosecuted. Eritreans make up the largest group of asylum seekers in Switzerland.

Eritreans traveling from the Horn of Africa to Europe face grave dangers during their journey, including rape, being held for ransom, torture by smugglers, and drowning in the Mediterranean when boats sink. Nonetheless, thousands remain undeterred.

In July, Qatar suddenly withdrew its 450 troops guarding the Eritrea-Djibouti border. The two countries had fought a two-day battle inside Djibouti in 2008, and the UN Security Council concluded that Eritrea was the aggressor. The two ultimately agreed to have Qatar mediate the dispute and patrol the border. The only result of the mediation was that Eritrea released four prisoners-of-war in 2016, after eight years of captivity; Djibouti claims Eritrea holds a dozen more. At Djibouti’s request, the AU proposed sending a fact-finding mission to the border but Eritrea did not respond. By year’s end the border remained quiet.

Relations with Ethiopia remain tense but no major incidents occurred in 2017. The two nations fought a bloody border war in 1998-2000, and Ethiopia occupies territory identified by an international boundary commission as Eritrean, including the town of Badme. President Isaias uses the “no-war, no-peace” situation with Ethiopia to continue his repressive domestic policies, including protracted national service.

The UN Security Council retained arms embargo against Eritrea until at least April 2018 after receiving a report from its Monitoring Group on Somalia and Eritrea. Eritrea again refused to cooperate with the group in 2017. The group reported it had no evidence Eritrea was sending arms to Al-Shabab in Somalia, but Eritrea continued to arm and train anti-Ethiopia and anti-Djibouti militias in violation of the UN embargo.

Absent evidence that Eritrea had implemented democratic reforms and ended its human rights abuses, the European Parliament in July once again denounced as unwarranted further disbursements from the European Union’s 2015 €200 (US$238) million aid package, awarded to try to stem migration from Eritrea.