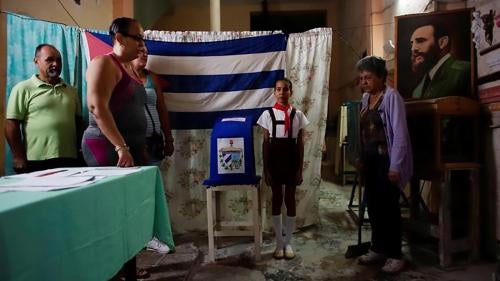 The Cuban government continues to repress and punish dissent and public criticism. The number of short-term arbitrary arrests of human rights defenders, independent journalists, and others was significantly less than in 2016, but still remained high, with more than 3,700 reports of arbitrary detentions between January and August 2017. The government continues to use other repressive tactics, including beatings, public shaming, travel restrictions, and termination of employment.

US President Donald Trump announced in June that he would reverse the previous administration’s policy toward Cuba by reinstating travel and commercial restrictions that had been eased in 2015.

The Cuban government continues to employ arbitrary detention to harass and intimidate critics, independent activists, political opponents, and others. The number of arbitrary short-term detentions increased dramatically between 2010 and 2016, from a monthly average of 172 incidents to 827, according to the Cuban Commission for Human Rights and National Reconciliation, an independent human rights group that lacks official authorization and the government considers to be illegal.

The number of detentions dropped significantly in 2017, with 4,537 reports of arbitrary detentions from January through October, a decrease of 50 percent compared to the same period in 2016.

Security officers rarely present arrest orders to justify detaining critics. In some cases, detainees are released after receiving official warnings, which prosecutors can use in subsequent criminal trials to show a pattern of “delinquent” behavior.

Detention is often used preemptively to prevent people from participating in peaceful marches or meetings to discuss politics. Detainees are often beaten, threatened, and held incommunicado for hours or days. The Ladies in White (Damas de Blanco)—a group founded by the wives, mothers, and daughters of political prisoners—like the Cuban Commission on Human Rights, lacks official authorization and is therefore considered illegal by the government. Police or state security agents continue to routinely harass, rough up, and detain its members before or after they attend Sunday mass.

In April, political activist Eliécer Ávila from the group Somos+ was arrested twice in three days for recording and broadcasting a protest message after authorities confiscated his computer in the Havana airport. The first arrest occurred on April 6, when he arrived from Colombia. He was released the following morning and returned to the airport to reclaim his computer. The following day, his documents and electronic devices were seized and police arrested him at home, according to media reports. He was released the same day on bail.

The government controls virtually all media outlets in Cuba and restricts access to outside information.  A small number of journalists and bloggers who are independent of government media manage to write articles for websites or blogs, or publish tweets. The government routinely blocks access within Cuba to these websites and only a fraction of Cubans can read independent websites and blogs because of the high cost of, and limited access to, the internet. In September 2017, Cuba announced it would gradually extend the home internet service to all the provinces in the country.

Independent journalists who publish information considered critical of the government are subject to smear campaigns and arbitrary arrests, as are artists and academics who demand greater freedoms. Henry Constantín Ferreiro, editor of La Hora de Cuba magazine and a regional vice president of the Inter American Press Association, was detained on February 20 in Camagüey airport, along with journalist Sol García Basulto, a La Hora de Cuba colleague and correspondent for the independent news website 14ymedio.

García Basulto was released without charges. Constantín was held incommunicado for about 36 hours for allegedly fomenting “enemy propaganda,” based on information from a computer that had been confiscated when he was previously briefly detained in November 2016. The charge was dropped in February, but in March, both journalists were accused of practicing journalism without proper certification, according to press reports, and prohibited from traveling abroad. Basulto was placed under house arrest on July 24.

Members of the Committee of Citizens Defenders of Human Rights (Comité de Ciudadanos Defensores de los Derechos Humanos), José Carlos Girón Reyes, the brothers Alberto Antonio and Leonardo Ramírez Odio, and their father Alberto de la Caridad Ramírez Baró, were detained on July 26 after staging a public protest calling for “justice, freedom and democracy.” The activists said they had been beaten in custody. Girón was released without charge on August 2; the other three remained behind bars until October 18.

The Cuban Commission for Human Rights and National Reconciliation reported scores of political prisoners—including 54 members of the group Cuban Patriotic Union (Unión Patriótica de Cuba)—as of May 2017. The government denies access to its prisons by independent human rights groups, which believe that additional political prisoners, whose cases they cannot document, remain locked up.

Dr. Eduardo Cardet Concepción, leader of the Christian Liberation Movement (Movimiento Cristiano Liberación), was sentenced three years in prison on March 20. He was detained on November 2016 after criticizing in interviews with international media former President Fidel Castro shortly after he died.

The activist Jorge Cervantes García, from the Cuban Patriotic Union, was detained allegedly for “contempt” and “resistance” in May, weeks after posting online videos addressing ill-treatment in a Cuban prison and corruption by Cuban authorities. After a 39-day hunger strike, he was transferred to a maximum-security facility. Cervantes was released in August after being held for 85 days.

Reforms to travel regulations that went into effect in January 2013 eliminated the need for an exit visa to leave the island. Exit visas had previously been used to deny people critical of the government, and their families, the right to travel. Since then, many people who had previously been denied permission to travel have been able to do so, including human rights defenders and independent bloggers.

Nonetheless, the reforms gave the government broad discretionary powers to restrict the right to travel on the grounds of “defense and national security” or “other reasons of public interest.” Such measures have allowed authorities to deny exit to people who express dissent.

According to the Cuban Commission for Human Rights and National Reconciliation, the government imposed restrictions mainly on people heading to Latin American countries to attend conferences. In June, the commission registered the highest number of restrictions on freedom of movement in many years: at least 29 people were prevented from traveling abroad to attend international conferences and other events.

Prisons are overcrowded. Prisoners are forced to work 12-hour days and are punished if they do not meet production quotas, according to former political prisoners. Inmates have no effective complaint mechanism to seek redress for abuses. Those who criticize the government or engage in hunger strikes and other forms of protest often endure extended solitary confinement, beatings, restrictions on family visits, and are denied medical care.

While the government allowed select members of the foreign press to conduct controlled visits to a handful of prisons in 2013, it continues to deny international human rights groups and independent Cuban organizations access to its prisons.

Despite updating its Labor Code in 2014, Cuba continues to violate conventions of the International Labour Organization that it has ratified, specifically regarding freedom of association, collective bargaining, protection of wages, and prohibitions on forced labor. While the law technically allows the formation of independent unions, in practice Cuba only permits one confederation of state-controlled unions, the Workers’ Central Union of Cuba.

On September 2016, police raided Cubalex, a six-year-old organization that investigates human rights violations and provides free legal services to free-expression activists, migrants, and human-rights defenders. Officers confiscated files, strip-searched four men and a woman, and arrested two attorneys, one of whom was still in detention at time of writing.

US and Cuba restored diplomatic relations in 2015, after the United States eased decades-old restrictions on travel and commerce. But in June 2017, President Trump declared that he would reverse the previous administration’s deal.

The US government expelled 15 Cuban diplomats from the embassy in Washington in October, after American diplomats in Havana reported a series of mysterious illnesses. In November, the US administration reinstated restrictions on Americans’ right to travel to Cuba and to do business tied to the Cuban military, security, or intelligence services. It also voted against the UN resolution condemning the US embargo on Cuba, reversing the previous abstention in 2016.

For the first time in years, Cuba agreed to allow a United Nations human rights investigator to visit the island. In April, the UN special rapporteur on trafficking in persons visited Cuba and called for new laws and stronger action targeting human trafficking.

The UN independent expert on human rights and international solidarity also visited Cuba in July 2017, and encouraged Cuba to ratify core international treaties—the International Covenant on Civil and Political Rights, and on Economic, Social and Cultural Rights, and their Optional Protocols.

In May, the European Union held its third high-level discussion on human rights with Cuba. In July, the European Parliament approved the first agreement with Cuba to strengthen economic and political ties and bring an end to the EU’s 1996 “Common Position on Cuba,” which conditions full EU economic cooperation with Cuba on the country’s transition to a pluralist democracy and respect for human rights. The agreement entered into force provisionally in November 2017, but at time of writing was still pending ratification by member countries for its full application.