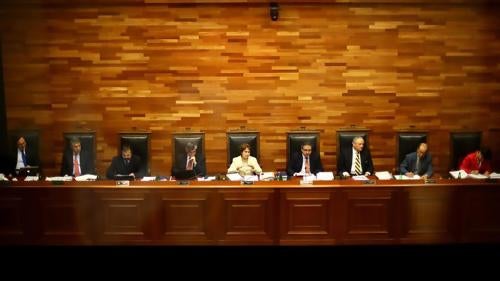 Twenty-eight years after the Chilean dictatorship imposed a total abortion ban, and after a difficult process that included the intervention of the Constitutional Court, the government in September 2017 enacted a law decriminalizing abortion if the life of the pregnant woman is at risk, the fetus is unviable, or the pregnancy is due to rape.

The courts continue to prosecute those responsible for human rights violations committed during the military regime. In 2017, courts convicted or charged former military officers and state actors in three of the most egregious crimes of Augusto Pinochet’s dictatorship from 1973 to 1990.

Cases of crimes committed by members of the armed forces and Carabineros (uniformed police) against civilians were transferred at the end of 2016 from military jurisdiction to civilian courts.

President Michelle Bachelet issued a decree that increased intrusive government access to personal data, violating Chileans’ right to privacy. However, the Contraloría General de la República (Chile’s Supreme Audit Institution) held that the decree was invalid and could not enter into force because the executive branch did not have legal authority to issue it.

After an investigation conducted by a Chamber of Deputies commission of inquiry revealed human rights violations against poor children under state care in the National Service for Minors (SENAME) network, the government proposed a set of bills to improve the centers and strengthen protection of children’s rights. The government also presented a bill to legalize same-sex marriage.

In March, the Supreme Court convicted and sentenced 33 former state agents for the enforced disappearances of 5 members of the Manuel Rodriguez Patriot Front in 1987. The victims' bodies were fastened to railroad sleepers and thrown into the sea.

In April, an investigating judge charged the former army commander-in-chief, Juan Emilio Cheyre, with complicity in the extrajudicial execution of 15 people in the La Serena regiment, where he was a lieutenant during the military government.

In September, an investigating judge in Santiago filed murder and attempted murder charges against 13 retired members of the army in the death of Rodrigo Rojas and the injury of Carmen Gloria Quintana. Soldiers arrested the two young activists during a protest in 1986, doused them with gasoline, set them alight, and then abandoned them in a ditch.

In September, the Bachelet administration submitted a bill to Congress that would lift the 50-year veil of secrecy over testimony given before the National Commission on Political Prison and Torture, known as the Valech I Commission, from November 2003 to May 2004. The commission learned the places in which detention took place and the torture methods used by the dictatorship, and recognized 28,459 victims of political prison and torture (in a second revision, an additional 9,795 new torture victims were recognized).

The lifting of the secrecy order generated intense debate among those who believe that opening the testimony to judges investigating human rights crimes violates the victims’ privacy and those who claim that the secret contributes to impunity enjoyed by the guilty.

As of December 2016, 69 percent of the total prison population was convicted, and 31 percent was being held in pretrial detention.

As of August 2016, Chilean prisons were operating at 103.2 percent capacity, rising to 117.6 percent in the Metropolitan Region and exceeding 200 percent in some prisons. As of October 2016, the Santiago Sur Preventive Prison Center, which has a maximum capacity of 2,384 people, held 5,057 inmates.

In 2017, the National Human Rights Institute (INDH) filed dozens of lawsuits for mistreatment of prison inmates, including for the new crime of torture, which was incorporated into the criminal code in November 2016.

President Bachelet issued a decree that would have dangerously increased government access to the personal data of all citizens. The decree required telecommunications companies to retain, for at least two years, data that would have allowed the government to know individuals’ location and with whom they communicate. The decree did not explicitly require a court order to access this stored data.

It also prohibited telecommunications companies from using technology that prevents interceptions, which could have been understood as a ban on protecting information through encryption. In November, the Contraloría General de la República held that the decree did not pass the ex ante control of legality (toma de razón), because the legal authority to issue such a regulation belongs with the legislative branch, not the executive.

The living conditions that children endure under state care in the National Service for Minors (SENAME) network are in dire need of improvement. Between January and June 2016, 34 children died under SENAME’s care. At time of writing, the public prosecutor was conducting an investigation into the deaths of 259 children in the last decade. The victims were living in SENAME centers when they died.

In 2017, the INDH visited 171 SENAME centers, 83 percent of the total in the country. Of 405 children interviewed, 197 reported violations of their rights, including neglect, physical abuse, psychological abuse, and sexual abuse or exploitation.

The scandal generated when these figures were publicized produced a response from the government, which presented or accelerated the processing of a set of bills that seek to replace and strengthen the institutional structure of state’s services for children in need.

The Court of Appeals in la Serena ordered the Prison Police Force to refrain from conducting invasive body checks and stripping children who visit detained relatives.

In August 2017, the Chilean Congress approved a law that ended the absolute prohibition of abortion the military dictatorship imposed at the end of its mandate in 1989. The Constitutional Court upheld a law decriminalizing abortion under three circumstances: if the life of the pregnant woman is at risk, the fetus is unviable, or the pregnancy is due to rape. However, the Constitutional Court extended the right to conscientious objection beyond the medical doctor carrying out the abortion to all personnel present in the operating room, and even to institutions.

In January 2017, the government presented to Congress a bill regarding women's access to a life free of violence. As of September 15, 2017, 29 women had died at the hands of spouses or partners and 79 attempted killings of women by their spouses or partners were recorded. The bill addresses forms of violence that Chilean law does not currently recognize as distinct criminal offenses, such as violence in non-cohabitating couples and violence experienced by women in public spaces.

In June, after four years of deliberation, a bill recognizing the right to gender identity was passed by the Senate and submitted to the House of Representatives for consideration. The bill allows for unmarried individuals over 18 years old to legally change their name and gender marker on their government-issued identity documents and requires medical certification.

In August 2017, President Bachelet introduced a bill to Congress that would legalize same-sex marriage and grant same-sex couples the right to access assisted reproduction techniques and adoption. The presentation of the bill corresponds to a commitment adopted by the Chilean State in the friendly settlement agreement signed on June 11, 2016, following a petition submitted to the Inter-American Commission on Human Rights (IACHR). The bill does not regulate, however, the situation of children of same-sex couples not united by marriage.

In June, President Bachelet publicly apologized to the Mapuche people for all social injustices that their communities have historically endured and that were committed or tolerated by the state.

In the context of the current Chilean constitutional-making process, indigenous people demand the recognition of Chile as a multinational State, collective rights, access to political rights such as self-determination, special political representation, and territorial rights to land, ancestral waters, and natural resources.

In 2017, conflict between the government and Mapuche communities was marked by acts of violence. In criminal cases against Mapuche activists accused of violent acts, the public prosecutor has insisted on applying the counterterrorism law, which does not guarantee due process and defines terrorism in excessively broad terms.

In May 2017, the government launched the "Chile Reconoce" project, which will grant Chilean nationality to more than 2,000 children and adults born in Chile between 1995 and 2014 and denied Chilean nationality because of their parents’ irregular migratory status.

In August 2017, the legislative process for a new immigration law began, aimed to replace legislation enacted in 1975.