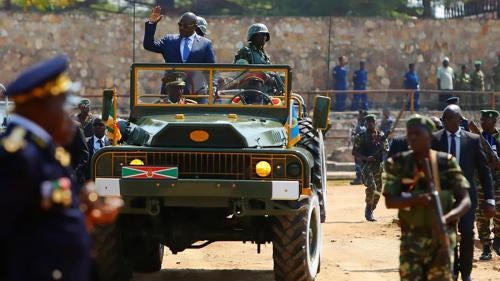 The political and human rights crisis that began in Burundi in April 2015, when President Pierre Nkurunziza announced that he would run for a disputed third term, continued through 2017, as government forces targeted real and perceived opponents with near total impunity. Security forces and intelligence services—often collaborating with members of the ruling party’s youth league, known as the Imbonerakure—were responsible for numerous killings, disappearances, abductions, acts of torture, rapes, and arbitrary arrests. Unknown assailants carried out grenade and other attacks, killing or injuring many people.

In September, a United Nations Commission of Inquiry, established by the Human Rights Council a year earlier, said it had “reasonable grounds to believe that crimes against humanity have been committed in Burundi since April 2015.” During its session later that month, the council extended the commission’s mandate for one year, but Burundi continues to refuse any form of cooperation with the commission. In October, judges of the International Criminal Court (ICC) authorized an investigation into crimes committed in Burundi since April 2015.

Also in October, Burundi’s government adopted a plan to revise the constitution to allow President Nkurunziza to stand for two new seven-year terms. If passed by a vote in parliament or national referendum, Nkurunziza could possibly stay in power until 2034.

Killings, Rapes, and Other Abuses by Security Forces and Ruling Party Youth

The violence in 2017 claimed scores of lives, according to Burundian and international human rights organizations. Dead bodies of people killed in unknown circumstances were regularly found across the country.

The Commission of Inquiry confirmed “the persistence of extrajudicial executions, arbitrary arrests and detentions, enforced disappearances, torture and cruel, inhuman or degrading treatment and sexual violence in Burundi since April 2015,” blaming most violations on members of the intelligence services, the police, the army, and the youth league of the ruling party. The commission indicated that “some violations have been committed in a more clandestine, but equally brutal, manner since 2016.”

The Commission of Inquiry collected several testimonies suggesting that “intelligence agents or members of the police” were involved in the disappearance of Oscar Ntasano, a former senator, in Bujumbura on April 21, 2017.

Human Rights Watch documented how in 2015 and 2016, members of the Imbonerakure and police—sometimes armed with guns, sticks, or knives—raped women whose male family members were perceived to be government opponents. In some cases, Imbonerakure threatened or attacked the male relative before raping the woman. Women often continued to receive threats after being raped. Human Rights Watch received credible reports that these abuses continued in 2017.

In early April, a video emerged showing about 200 members of the Imbonerakure gathered in northern Burundi, singing songs encouraging the rape of political opponents or their relatives. Incitement to hatred, violence, and rape, particularly by the Imbonerakure, has become common in Burundi, almost always without condemnation by authorities.

Several grenade attacks took place in bars and elsewhere across Burundi in 2017, killing and injuring many, including children. The identity of the perpetrators was often unknown.

The UN Commission of Inquiry found that “human rights abuses were also committed by armed opposition groups [since April 2015], but these proved difficult to document.” Emmanuel Niyonkuru, minister of water, environment, land management, and urban planning, was killed on January 1. The commission was “unable to establish” who was responsible for this and several other “assassinations.”

The number of Burundian refugees remained high in 2017, despite claims from the Burundian government that the country was “peaceful.” More than 400,000 Burundians who fled the country since 2015 remained abroad at time of writing, most in Tanzania, Rwanda, Uganda, and the Democratic Republic of Congo.

On September 15, alleged members of the Congolese security forces used excessive force to quash a protest in Kamanyola, South Kivu province, in eastern Congo, killing around 40 Burundian refugees and wounding more than 100 others.

Most leading civil society activists and many independent journalists remained in exile, after repeated government threats in 2015 and arrest warrants against several of them, and after the Interior Minister banned or suspended 10 civil society organizations that had spoken out against government abuses in October 2016.

In January, two new laws allowed for increased control by authorities over the activities and resources of Burundian and foreign nongovernmental organizations. On January 3, authorities banned the Ligue Iteka, a prominent Burundian human rights organization.

The national intelligence agency detained Aimé Gatore, Emmanuel Nshimirimana, and Marius Nizigama from June 17 to 27, before they were transferred to Mpimba prison, in Bujumbura, and later to Muramvya prison, around 30 kilometers away from the capital. They remained in detention at time of writing, charged with “threatening state security.”

Germain Rukuki, a human rights defender and former treasurer of Action by Christians for the Abolition of Torture (Action des Chrétiens pour l’Abolition de la Torture, ACAT) in Burundi, one of the banned organizations, has been detained since July 13 and faces several charges, including “rebellion.” On August 25, UN experts called for Rukuki’s release, adding that the charges against him formed “part of an overall context of threats and harassment against human rights defenders in Burundi.”

Authorities continued to severely restrict media space in Burundi. Radio Publique Africaine, Radio Bonesha, and Radio-Television Renaissance—all private radio stations that the government had closed following an attempted coup d’état in May 2015—remained off the air at time of writing.

Other media were allowed to operate in 2017, but faced grave restrictions on their activities. On April 5, intelligence agents interrogated Joseph Nsabiyabandi, the editor-in-chief of Radio Isanganiro, another privately owned radio station, about his alleged collaboration with Burundian radios operating in exile in Rwanda. He was later criticized for having “incited the opinion and the population to revolt.” Radio Isanganiro had been closed in May 2015, and then allowed by authorities to re-open in February 2016, after it signed an “ethical charter” with the Burundian National Communications Council, in which it committed to a “balanced and objective” editorial line, respectful of the “country’s security.”

Impunity for serious crimes committed in Burundi remains the norm. The justice system is manipulated by ruling party and intelligence officials and judicial procedures are routinely flouted.

Burundi became the first country to withdraw from the ICC on October 27, 2017. Two days earlier, ICC judges had authorized an investigation into crimes committed in the country since April 2015. The judges found that Burundi’s withdrawal does not affect the court’s jurisdiction over crimes committed while the country was a member.

Since April 2009, Burundi has criminalized consensual same-sex conduct. Article 567 of the penal code, which penalizes consensual same-sex sexual relations by adults with up to two years in prison, violates the rights to privacy and freedom from discrimination. These rights are protected by Burundi’s Constitution and enshrined in its international treaty commitments.

In May 2017, President Nkurunziza signed into law new regulations requiring unmarried couples to legalize their relationships through church or state registrations. In November, a new decree banned women from drumming and limited all “cultural shows” to official ceremonies authorized by the Ministry of Culture.

There was little progress in regional and international efforts to broker a dialogue between Burundian political actors, facilitated by former Tanzanian President Benjamin Mkapa. Most major donors have suspended direct budgetary support to the Burundian government, but some maintained humanitarian assistance. The US and the European Union maintained targeted sanctions on several senior Burundian officials and opposition leaders.

In addition to renewing the mandate of the Commission of Inquiry, the UN Human Rights Council also adopted another resolution on Burundi, on September 28, presented by the African Group, dispatching a mission of three experts to gather information on abuses to share with local judicial authorities.

In August, the UN Security Council said it remained “alarmed by the increasing numbers of refugees outside the country and disturbed by reports of torture, forced disappearances, and extra-judicial killings, as well as by the persisting political impasse in the country and the attendant serious humanitarian consequences.”

A July 2016 Security Council resolution authorizing 228 UN police officers to deploy to the country was not implemented in 2017 due to continued rejection by Burundian authorities.