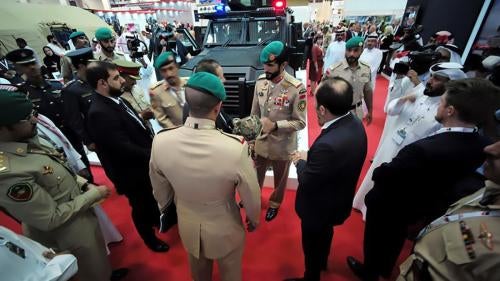 Bahrain’s human rights situation continued to worsen in 2017. Authorities shut down the country’s only independent newspaper and the leading secular-left opposition political society. The country’s preeminent human rights defender remained in prison on speech charges. The government, ending a de facto moratorium on use of the death penalty, executed three people in January following unfair trials, despite their alleging that they had been tortured and their confessions coerced.

The government reversed two of the few substantive recommendations of the Bahrain Independent Commission of Inquiry (BICI) that it had previously implemented. In January, authorities restored arrest and investigation powers to the National Security Agency, despite its record of torture and abuse, and in April, King Hamad bin Isa Al Khalifa signed legislation authorizing trial of civilians before military courts.

Bahrain continued to deny access to special procedures of the Office of the UN High Commissioner for Human Rights, including the special rapporteur for torture. Authorities prevented dozens of rights advocates from traveling to Geneva ahead of Bahrain’s third Universal Periodic Review (UPR) in May and the regular UN Human Rights Council (UNHRC) session in September.

On July 10, a court sentenced Nabeel Rajab, head of the Bahrain Center for Human Rights, to two years for “disseminating false news, statements and rumors … that would undermine [Bahrain’s] prestige and status,” in relation to media interviews he gave in 2015. He faced 15 years in prison in a separate case for “insulting public authorities [the Interior Ministry],” “insulting a foreign country [Saudi Arabia],” and “spreading false rumors in time of war,” in connection with tweets criticizing alleged torture and Bahrain’s participation in the Saudi Arabi-led military operations in Yemen.

On June 4, the Information Affairs Ministry ordered the suspension of Al Wasat, Bahrain’s only independent newspaper, ostensibly for a column about unrest in the Hoceima region of Morocco. On June 24, the newspaper’s board told employees that the suspension forced the termination of their contracts.

On May 31, the High Civil Court, acting on the request of the government, dissolved the secular-left National Democratic Action Society (Wa’ad). The government charged Wa’ad with “incitement of acts of terrorism and promoting violent and forceful overthrow of the political regime,” because the group condemned the January execution of three men on terrorism charges, calling them “martyrs,” and for expressing solidarity with “a banned organization,” referring to Al-Wefaq, the country’s largest opposition society, which authorities had similarly dissolved in July 2016.

On June 6, Bahraini authorities declared that it would be a crime punishable by up to five years in prison to express “sympathy” with Qatar or criticize Bahrain’s decision to break relations with that country and, together with Saudi Arabia, the United Arab Emirates, and Egypt, impose economic and movement restrictions.

In late April and again in late September, authorities summoned more than 20 rights activists, lawyers, and political opposition figures for questioning on charges of taking part in illegal gatherings. This restriction effectively placed these individuals under a travel ban, ensured that they could not go to Geneva for meetings in connection with Bahrain’s third UPR at the UNHRC, which started on May 1, and the regular session of the Human Rights Council in September.

According to the London-based Bahrain Institute for Rights and Democracy (BIRD), as of late October authorities had stripped 105 persons of Bahraini citizenship, bringing the total since 2012 to 455.

The government on January 5 restored arrest and detention authority to the National Security Agency (NSA), an intelligence agency. The decision reversed one of the few significant security sector reforms authorities had taken in line with a recommendation of the BICI, which had concluded that the NSA “followed a systematic practice of physical and psychological mistreatment, which in many cases amounted to torture.”

King Hamad in April ratified a constitutional amendment giving military courts jurisdiction over civilians. The last time Bahraini military courts prosecuted civilians was in the aftermath of large anti-government protests in 2011, when they convicted some 300 people of political crimes. The explanatory note accompanying the February vote in the Council of Representatives approving the amendment said that it was needed to “make the military justice system flexible and speedy in investigating and sentencing.”

On May 23, security forces appeared to have used excessive deadly force in a raid on a sit-in protest in the village of Diraz that left five demonstrators killed and dozens wounded. The sit-in had been in place since June 2016 outside the home of Sheikh Isa Qassim, widely regarded as the spiritual leader of the Al-Wefaq opposition group, after authorities had revoked his citizenship. The government said the objective was to “apprehend terrorists operating in the area and clear illegal roadblocks and obstructions.”

Sayed Alawi, an employee of the state telecommunications company Batelco, was subjected to enforced disappearance when authorities arrested him on October 24, 2016. For several weeks, family members went from one security office to another, following instructions from officials, but was never able to make contact with him except for three brief phone calls about six weeks apart between late November 2016 and late February 2017, and a fourth call of about one minute on July 27.

The family submitted numerous complaints to the Interior Ministry’s Ombudsman Office and Special Investigations Unit, and the Office of the Pubic Prosecutor. On September 11, the Ombudsman Office responded to an inquiry about the state of its investigation, saying that Allawi “had been transferred to be under the responsibility of another authority which is out of the Ombudsman’s remit.” On October 22, the official news agency announced that Allawi along with three others was in military custody and would face trial before a military court on terrorism-related charges.

On January 15, Bahrain ended a de facto moratorium since 2010 on executions when authorities carried out death sentences against Sami Mushaima, 42, Ali al-Singace, 21, and Abbas al-Sameea, 27. The men alleged they had been tortured and that their lawyers did not have access to all their hearings and could not cross-examine prosecution witnesses.

Mohamed Ramadan and Husain Ali Moosa remained on death row following a decision of the First Supreme Criminal High Appellate court in May 2015 upholding their death sentences for killing a policeman, despite their claims that their confessions had been coerced. On June 6, the Fourth Higher Criminal Court sentenced to death Sayed Ahmed al-Abbar, 21, and Husain Ali Mohamed, 20, in connection with an attack on a military patrol vehicle and the reported death of a security officer.

Conditions of Nabeel Rajab’s ongoing detention appeared at times to amount to arbitrary punishment. Authorities repeatedly denied him bail or release following his re-arrest in June 2016 on speech charges, although he posed no risk to himself or others, or risk of flight. He was kept in solitary confinement for significant periods of time. This denial of liberty also came despite medical conditions that required his prolonged hospitalization and repeated postponements of hearings. Rajab’s family said that on one occasion authorities returned him to his jail cell two days after an operation, contrary to medical advice. On November 22, the High Criminal Court in Manama upheld a two-year prison sentence against Rajab, in relation to TV interviews from 2015 and 2016, accusing him of “disseminating false news, statements and rumors about the internal situation in the kingdom that would undermine its prestige and status.”

Authorities at Bahrain International Airport interrogated human rights activist Ebtisam al-Sayegh in March, after she returned from meetings in conjunction with the UNHRC in Geneva. In May, following another interrogation, she alleged that NSA officers had subjected her to physical, verbal, and sexual abuse. Shortly before midnight on July 3 armed and masked men in civilian cars raided her home and arrested her again. Authorities charged al-Sayegh on July 18 with supporting terrorist activities, under the country’s anti-terrorism law. According to Dublin-based Front Line Defenders, inmates at the Isa Town Women’s Prison reported seeing her there with evident injuries, including a neck brace. Al-Sayegh was provisionally released from detention on October 22 but authorities made no announcement about the status of the charges against her.

On October 30, a criminal court in Manama sentenced three relatives of human rights defender Sayed al-Wadaei to three years in prison on dubious terrorism-related charges, despite due process violations and allegations of ill-treatment and coerced confessions. Targeting family members to silence activists amounts to collective punishment.

Law 19/2009 regulates personal status matters only in Sunni religious courts, so that Shia women are not covered by a codified personal status law. Both Sunni and Shia women face discrimination in the right to divorce and other matters.

Adultery and sexual relations outside marriage are criminalized. No law prohibits discrimination on the grounds of gender, gender identity, or sexual orientation.

Bahrain continued to participate in the Saudi Arabia-led coalition military operations in Yemen.

US President Donald Trump, in a May meeting, told King Hamad that “there won’t be any strain [in relations] with this administration.” On September 8, the State Department announced it had approved a $2.78 billion sale of F-16V aircraft and other military equipment, a sale previously held up for unspecified human rights concerns. On August 15, in remarks on the release of the 2016 International Religious Freedom Report, Secretary of State Tillerson said, “Bahrain must stop discriminating against the Shia communities.”

On July 10, the State Department criticized the sentencing of Nabeel Rajab and called for his release. The European Union, Germany, and Norway also criticized Rajab’s sentencing; the United Kingdom failed to do so.

UN High Commissioner for Human Rights Zeid Ra’ad Al Hussein, in his September 11 address to the 36th session of the Human Rights Council, decried the “arrests, intimidation, travel bans and closure order, with increasing reports of torture” in Bahrain, saying that “democratic space in the country has essentially been shut down” and “no public relations campaign can paper over the violations being inflicted on the people of Bahrain.” The UN Committee against Torture, in its observations on Bahrain’s second and third periodic reports, expressed concern over “numerous and consistent allegations of widespread torture” and “the climate of impunity which seems to prevail.”