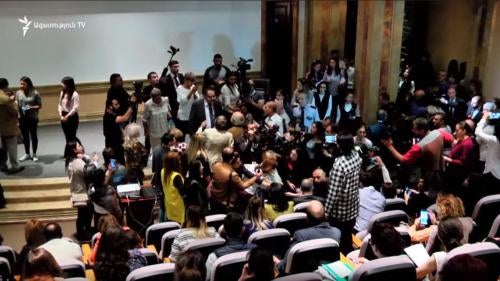 Parliamentary elections, the first since the 2015 constitutional amendments moving the country from a presidential to a parliamentary system, failed to improve public confidence in the electoral system. The ruling Republican Party dominated the polls amid reports of irregularities. Authorities failed to bring to justice officials responsible for excessive use of force against protesters and journalists, including during largely peaceful protests in Yerevan in July 2016. The trials of 32 men accused of crimes committed during the violent takeover of a police station in Yerevan, which prompted the protests, were ongoing at time of writing. Four defendants have reported ill-treatment in detention.

Human rights defenders faced threats and harassment. Domestic violence persists as a serious problem. The government introduced in parliament a draft law on violence in the family, but women’s rights groups opposed it, fearing it emphasized keeping families together rather than protecting victims. Many children with disabilities lack quality education and live in institutions separated from their families.

The government overhauled the onerous system for prescribing and accessing opioid pain medications. Discrimination against women and people with disabilities, and based on sexual orientation and gender identity, persisted.

International observers, led by the Organization for Security and Co-operation in Europe (OSCE), concluded that the April parliamentary elections “were well administered,” but the polls were “tainted by credible information about vote-buying, and pressure on civil servants and employees of private companies.” The ruling party won the May Yerevan municipal elections amid low voter turnout and reports of vote-buying and voter intimidation.

In April, 30 public school and preschool principals filed lawsuits against the nongovernmental organization (NGO) Union of Informed Citizens and its director Daniel Ioannisyan, for allegedly damaging their honor and dignity. The NGO had published audio recordings they claimed showed several principals recruiting supporters for the ruling party ahead of the parliamentary elections. The principals dropped the suit in July.

In June, Artur Sakunts, director of Helsinki Citizens’ Assembly Vanadzor Office, reported death threats from a Facebook user, apparently in response to Sakunts’ Facebook post the same day criticizing the government. The General Prosecutor’s Office opened an investigation 10 days later, but no charges had been brought at time of writing.

Local rights groups continue to raise concerns about the harassment of, and spurious criminal embezzlement charges against, Marina Poghosyan, whose organization, Veles, provides legal support to victims of predatory lenders, including some with alleged links to local authorities.

Lack of Accountability for Abuses by Law Enforcement Officials

The government has failed to ensure full accountability for police violence against largely peaceful protesters and journalists during protests in Yerevan in July 2016. While some police officers faced disciplinary actions, no officials have faced criminal charges.

At the same time, authorities aggressively prosecuted protest participants and leaders. Courts convicted 22 people, sentencing 11 to prison terms of one to three-and-a-half years. Seven others received conditional sentences, three were fined, and one received both a conditional sentence and a fine. Most pleaded guilty, for which they received a speedy trial or a lesser sentence. Charges included using violence during mass disorder and interfering with the work of a journalist. Trials of other protesters and protest organizers were ongoing.

Four men on trial for alleged crimes committed during the July 2016 armed takeover of a Yerevan police station alleged that police beat them in the court building in June. Officers removed the men from the courtroom after an argument broke out between them and police. The men said police beat them in basement holding cells. Authorities opened an investigation but no criminal charges have been brought. Some officers alleged to have participated in the beatings remained on duty in the courtroom.

Attacks on and Harassment of Journalists

The Committee to Protect Freedom of Expression, a media freedom NGO, documented physical attacks and interference against journalists including during the parliamentary and municipal elections.

On May 11, four officers entered the home of Arpi Makhsydyan, a journalist with Civilnet.am, without a warrant, claiming they were searching for a criminal suspect. Makhsudyan refused the search. Police later claimed they wanted only to question her. Makhsudyan believes police sought to intimidate her for her critical journalism. She filed a complaint about police conduct, but authorities failed to effectively investigate.

In February, the government approved a National Strategy on Palliative Care and an Action Plan, specifying much needed reforms for delivery of adequate palliative care to patients with life-threatening illnesses. Authorities registered oral morphine in March, and in November overhauled onerous and time-consuming prescription and procurement procedures for accessing it. 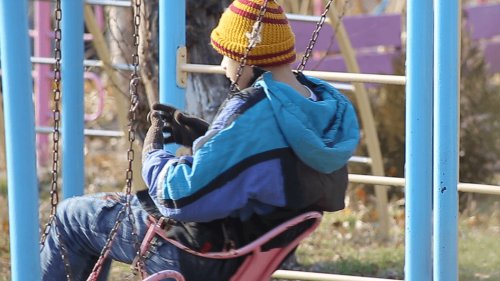 MERI’S STORY
Meri was born in August 2009 with Down Syndrome. Soon after her birth, a trusted doctor encouraged...

Meri was born in August 2009 with Down Syndrome. Soon after her birth, a trusted doctor encouraged her parents, Siranush and Artur, to leave Meri in the hospital claiming she would likely not survive more than a few days. With no other information about babies born with disabilities, the couple reluctantly abandoned their newborn. Yet Siranush never let go of a belief that Meri might still be alive.

After their older daughter survived life-threatening injuries in 2014 in a car accident, the couple committed to finding out what happened to Meri. They quickly discovered that she had grown up in a state baby home, and was now living in a Yerevan orphanage for children with disabilities very nearby.

After five long years, they were reunited.

“They brought Meri to me, and I was shaking all over my body, I couldn’t help it,” says Artur. “I was hugging the child, I couldn’t speak. My tongue was tied. It was very emotional.”

The family soon brought Meri home, but five years in orphanages had hindered her development. Meri could not walk, and got around by crawling. She did not speak, and did not even scream to communicate.

In the loving care of a warm home, Meri has formed a strong bond with her elder sister, learned to walk, and asks for her “ma” and “pa.”

“The difference is like mountains,” says Artur proudly. “We are hopeful, we believe, that a lot of things will change in her.”

The Coalition to Stop Violence against Women reported at least four women killed by their partners or family members in the first half of 2017, and at least 50 killed between 2010 and 2017. The coalition received 5,299 calls about domestic violence incidents through September 2017. In the same period, police received 602 complaints of various types of violence within the family and investigated 142 instances. Authorities brought criminal charges in 31 cases.

Several coalition activists and lawyers reported pressure and threats for their work. Despite years of pressure from local women’s rights organizations, Armenia has no law criminalizing domestic violence and has not joined the Council of Europe’s Istanbul Convention on Prevention and Combating Violence against Women and Domestic Violence.

In November, the government presented to parliament a draft law on prevention of violence in the family and protections for victims. Women’s rights organizations opposed the law after the government introduced last minute changes, without public discussion, on “restoring harmony in the family,” which they believe is designed to promote reconciliation and could undermine full protections for victims.

Lesbian, gay, bisexual, and transgender (LGBT) people face harassment, discrimination, and violence. The LGBT rights organization PINK Armenia documented nine physical attacks based on sexual orientation or gender identity through August. Officials opened investigations in several cases, but the law does not include anti-LGBT bias as an aggravating circumstance. Fear of discrimination and public disclosure of their sexual orientation prevents many LGBT people from reporting crimes.

PINK Armenia Director Mamikon Hovsepyan reported a campaign of homophobic Facebook posts in May, including calls to attack the office and staff, following the Yerevan municipality’s controversial removal of LGBT-themed social advertisements.

Days before the annual Golden Apricot International Film Festival in July, the Union of Cinematographers of Armenia (UCA) denied the festival’s use of the main venue. The festival was unable to screen 40 films including two LGBT-themed films. Although officially the UCA justified the refusal citing the death of the UCA president more than a month earlier, local activists believe that inclusion of films on LGBT prompted the denial.

In November, Armenia and the European Union (EU) signed a Comprehensive and Enhanced Partnership Agreement, aiming to strengthen political dialogue, increase economic cooperation, and promote reforms, including on human rights and the rule of law. Following the EU-Armenia Human Rights Dialogue in May, the EU called for adoption of laws against domestic violence and discrimination, and for effective investigation and prosecution of crimes committed by law enforcement.

Also in March, Armenia endorsed the Safe Schools Declaration, committing to do more to protect students, teachers, and schools during times of armed conflict, including through implementation and use of the Guidelines for Protecting Schools and Universities from Military Use during Armed Conflict.

In a statement following his September visit, the United Nations special rapporteur on the right to health, Dainius Pūras, said that Armenia’s approach to drug control “remains punitive and restrictive undermining the right to health of people who use drugs and of those in need of palliative care.”

Following its March review, the UN Committee on the Rights of Persons with Disabilities commended the government’s commitment to inclusive education by 2025 and other steps, but raised concerns about lack of accessibility; discrimination; institutionalization of children with disabilities; neglect, inhuman treatment, and deprivation of liberty of persons with disabilities in institutions; deprivation of legal capacity; inadequate support for living independently in communities; and barriers to accessing inclusive education.

The UN Committee against Torture’s January concluding observations noted some improvements, but criticized excessive use of pretrial detention; lack of effective investigations into ill-treatment allegations; excessive use of force by police; violations of detainees’ rights; attacks on journalists; domestic violence; and abuse of children in institutions.

In its November 2016 concluding observations, the UN Committee on the Elimination of All Forms of Discrimination against Women acknowledged some legislative and policy improvements, but noted the lack of comprehensive legislation on anti-discrimination and on preventing and prohibiting gender-based violence; persistence of gender-based violence and underreporting of crimes; and inadequate access to contraception and healthcare, among other concerns.