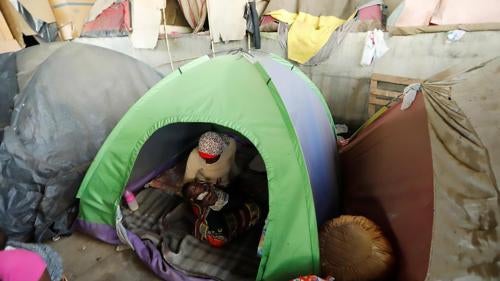 Despite constitutional amendments passed in 2016, Algerian authorities continued to resort in 2017 to criminal prosecutions for peaceful speech, using articles in the penal code criminalizing “offending the president,” “insulting state officials,” and “denigrating Islam” as well as other articles on sharing “intelligence with foreign powers.” They have also continued to ban demonstrations in Algiers.

President Abdelaziz Bouteflika was re-elected to a fourth five-year term in 2014, despite being in visibly frail health. In legislative elections held on May 4, 2017, the governing coalition, led by the National Liberation Front and the National Rally for Democracy, maintained its majority.

Algerian authorities routinely violate the right to freedom of assembly, despite constitutional guarantees of that right. The penal code punishes organizing or participating in an unauthorized demonstration in a public place with up to one year in prison (article 98). Authorities in Algiers, the capital, banned public demonstrations indefinitely in 2001, when the country was under a state of emergency. Authorities did not rescind the ban when they lifted the state of emergency in 2011.

The ban on demonstrations in Algiers is strictly enforced by authorities, who mobilize large numbers of police to thwart demonstrations and detain participants, usually holding them for a few hours before releasing them.

For example, on September 6, 2017, dozens of protesters took to a square in central Algiers wearing t-shirts with the words "Article 102," referring to the constitutional article that stipu­lates a president can be removed from office if he cannot carry out his duties. At least six of them were detained for six hours before being released without charge, according to local media.

In 2012, the government enacted Law 12-06, which requires all associations—including those that had already successfully registered—to re-file registration applications and obtain a registration receipt from the Interior Ministry before they can operate legally, in a cumbersome procedure akin to a new registration.

To date, major human rights organization such as the Algerian League for Human Rights (Ligue Algérienne des Droits de l’Homme, LADDH) and Youth Action Rally (Rassemblement Action Jeunesse, RAJ), and the Algerian division of Amnesty International, which all submitted compliance applications in January 2014 as provided for by Law 12-06, have still not obtained a receipt certifying their legal existence. Lack of a receipt means they are unable to open a bank account or rent an office in their own name or hire a public hall for a meeting. Moreover, members of an association that is “non-accredited, suspended, or dissolved” risk prison sentences of up to six months for conducting activities in its name.

Authorities used the association law to deny registration to a charitable organization formed by members of Algeria’s tiny Ahmadiyya religious minority, basing its refusal on language in the law that gives authorities broad leeway to deny authorization if they deem that the content and objectives of a group’s activities violate Algeria’s “fundamental principles (constantes nationales) and values, public order, public morals, and the applicable laws and regulations.”

Since the 1990s, Algeria has seen a proliferation of privately owned newspapers that enjoy a certain margin of freedom to criticize public figures and state policies. The 2014 Law on Audio-Visual Activities ended the formal state monopoly on audiovisual media. However, repressive press laws, dependence on revenues from public-sector advertising, and other factors limit press freedom. The Information Code, adopted in 2012, states that news journalism is to be “a freely practiced activity” as long as it respects “national identity, the cultural values of society, national sovereignty and national unity, as well as the requirements of national security, national defense, public order, and the country’s economic interests, among others.”

In 2017, authorities prosecuted a number of Algerians for critical speech.

On August 9, 2016, an Algiers appeals court upheld a two-year prison sentence for Mohamed Tamalt, a freelance journalist with dual Algerian and British nationality, for a video he posted on Facebook featuring a poem deemed offensive to Algeria’s president. Tamalt died in prison on December 11, 2016, after staging a hunger strike to protest his conviction. Authorities denied mistreatment but his family insisted that negligence or mistreatment contributed to his death.

Algerian authorities also prosecuted Marzoug Touati, a blogger and editor of the website Al-Hogra. Algerian security forces arrested Touati at his home in the coastal city of Béjaïa on January 18. According to his lawyer, security forces interrogated Touati about a video that he published online on January 9 containing a teleconferenced interview with an Israeli Foreign Ministry spokesman, who stated that Israel has maintained a liaison office in Algiers since before 2000.

A court in Béjaïa on January 22, 2017, ordered his pretrial detention on the charge of "talking to the agents of a foreign power with the intention of causing harm to Algeria's army, diplomatic relations, and financial interests," and "inciting citizens to carry weapons and gather illegally.” He was still detained as of December 2017 in Oued Ghir prison, awaiting trial.

Algeria’s constitution enshrines the principle of nondiscrimination based on gender and requires the state to take positive action to ensure equality of rights and duties of all citizens, men and women. In February 2016, parliament introduced an article proclaiming that the “state works to attain parity between women and men in the job market,” and “encourages the promotion of women to positions of responsibility in public institutions and in businesses.” 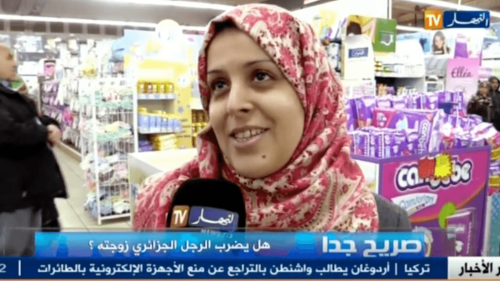 In 2015, parliament adopted amendments to the penal code specifically criminalizing some forms of domestic violence. Assault against one’s spouse or former spouse can be punished by up to 20 years in prison, and the perpetrator can face a life sentence for attacks resulting in death. The amendments also criminalize sexual harassment in public places.

Despite adoption of the law, Algeria has yet to adopt the more comprehensive legal measures, such as protection orders to protect women from violence and specific obligations on law enforcement to respond to domestic violence. The law, moreover, makes women vulnerable to threats from the offender or relatives, by including a provision that a pardon by the victim puts an end to prosecution.

Algeria’s Family Code continues to discriminate against women despite some amendments in 2005 that improved women’s access to divorce and child custody. Algeria also continues to retain article 326 in its penal code, which allows anyone who abducts a minor to escape prosecution if they married their victim.

More than 266 members of Algeria’s tiny Ahmadi minority have been prosecuted since June 2016, and some imprisoned for up to six months. Senior government officials have at times claimed that Ahmadis represent a threat to the majority Sunni Muslim faith, and accused them of collusion with foreign powers.

Authorities charged them under one or more of the following charges: denigrating the dogma or precepts of Islam; participating in an unauthorized association; collecting donations without a license; and possessing and distributing documents from foreign sources that endanger national security. At least 20 have faced a charge of practicing religion in an unauthorized place of worship under Algeria’s 2006 law governing non-Muslim religions, even though Ahmadis consider themselves to be Muslim.

On September 13, 2017, the court of First Instance in Ain Tedles, Mostaganem, sentenced Mohamed Fali, the president of the community, to a term of six months in prison, suspended, and a fine.

From August to October 2017, authorities rounded up more than 3,000 sub-Saharan migrants of different nationalities living in and around Algiers and bused them 1,900 kilometers south to a camp in Tamanrasset, from which some were bused into Niger.

Those forcibly transported to Tamanrasset included migrants who have lived and worked for years in Algeria. Authorities then expelled several hundred to Niger.

Algeria’s penal code criminalizes same sex relations with a prison sentence of two months to two years. In 2015, several people were arrested for same-sex relations but none were prosecuted.

Activists state that during and after the 2014 presidential election, anti-LGBT rhetoric from politicians and media led to increased harassment and violence, leading many lesbian, gay, bisexual, and transgender community leaders to flee the country. Activists have documented recent cases of violence on the grounds of sexual orientation and gender identity within families, at universities, in the streets, and in prisons.

Algeria underwent its third Universal Periodic Review (UPR) at the United Nations Human Rights Council (UNHRC), on May 8, 2017. Algeria received 229  recommendations from states. Algeria failed to accept many of the most important recommendations, related to the abolition of the death penalty, ratifying the Rome Statute, decriminalizing same sex relations, and ending discrimination against women, among others.

Algeria continued during 2017 its noncompliance with longstanding requests for country visits by special procedures of the UNHRC including the special rapporteurs on torture, on human rights while countering terrorism, and on extrajudicial, summary and arbitrary executions, and the Working Group on Enforced and Involuntary Disappearances.

On April 2017, the special rapporteur on the right of everyone to the enjoyment of the highest attainable standard of physical and mental health, released his report on his 2016 visit to Algeria. While commending the government for improving basic health-related indicators, he also noted the prevalence of inequalities and discrimination against certain population groups, such as people living with HIV/AIDS, drugs users, men who have sex with men, migrants, and refugees and called for the decriminalization of homosexuality and sex work.

The European Union and Algeria adopted their shared Partnership Priorities for the period 2017-2020 at the Association Council of 13 March 2017. Strong emphasis was placed on the implementation of Algeria’s new constitution. Notably, the EU pledged to assist Algeria in the areas of governance, democracy, promotion and protection of fundamental rights— including labor rights—strengthening the role of women in society, decentralization, judiciary, and civil society.