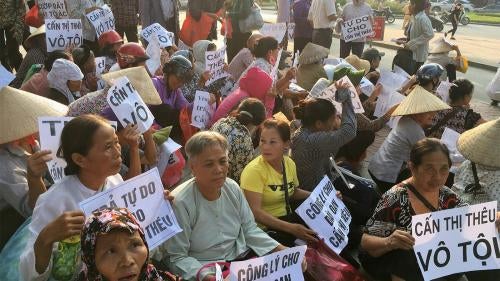 The Communist Party of Vietnam (CPV) in 2016 maintained its control over all public affairs and punished those who challenged its monopoly on power. Authorities restricted basic rights, including freedom of speech, opinion, association, and assembly. All religious groups had to register with the government and operate under surveillance. Bloggers and activists faced daily police harassment and intimidation, and were subject to arbitrary house arrest, restricted movement, and physical assaults. Many were detained for long periods without access to legal counsel or family visits. The number of bloggers and activists known to be convicted and sentenced to prison almost tripled from the previous year, from 7 to at least 19.

In January, the CPV held its 12th congress, during which it selected the country’s new politburo. Of the 19 members, four, including Vietnam’s new president Tran Dai Quang, were from the Ministry of Public Security. In May, Vietnam held a tightly controlled and scripted national election in which all candidates had to be approved by the CPV. Several dozen independent candidates were intimidated and disqualified.

Freedom of Speech and Opinion

The Vietnamese government frequently uses vaguely worded penal code provisions to crackdown on dissent, including “undermining national unity,” “conducting propaganda against the state,” and “abusing the rights to democracy and freedom to infringe upon the interests of the state.”

During the first nine months of 2016, at least 19 bloggers and activists were put on trial and convicted. Others continue to be held without trial, including rights campaigners Nguyen Van Dai, Tran Anh Kim, Le Thanh Tung, and Nguyen Ngoc Nhu Quynh.

In August, the People’s Court of Khanh Hoa sentenced cousins Nguyen Huu Quoc Duy and Nguyen Huu Thien An to three and two years respectively for “conducting propaganda against the Socialist Republic of Vietnam” in accordance with article 88 of the penal code. According to state media, Nguyen Huu Thien An painted reactionary slogans on the outside wall of a police station, while Nguyen Huu Quoc Duy called for the VCP leadership to be removed. The two were also accused of accessing “reactionary” websites.

In September, the People’s Court of Dong Da district in Hanoi sentenced land rights activist Can Thi Theu to 20 months in prison for participating in a public protest and boycotting the national election.

There were frequent physical assaults against human rights bloggers and campaigners at the hands of anonymous men who appear to be acting with state sanction and impunity. During the first seven months of 2016, at least 34 people—including children—reported that unknown assailants beat them.

In February, men threw rocks at the house of former political prisoner, Tran Minh Nhat, and broke his skull. In April, former political prisoner Nguyen Dinh Cuong was taken to a police station in Nghe An province where men in civilian clothes beat ad punched him. In May, police briefly detained 17-year-old rights activist Huynh Thanh Phat for allegedly participating in pro-environment protests. Two men wearing surgical masks and civilian clothes attacked him on the way home from the police station. In June, an unidentified man punched rights activist Nguyen Van Thanh in a café in Da Nang and bruised his face. In July, men in civilian clothes attacked rights activist La Viet Dung with a brick in Hanoi and broke his skull. No one was charged in any of the cases.

Police brutality continued, and detainees were apparently injured and even killed as a result. For example, in March 2016, Y Sik Nie died from alleged torture in Dak Lak province after being arrested for theft. In July, Bui Minh Trang, Bui Minh Truong, and Tran Van Cuong reported that they were detained for five days without a warrant and then beaten in custody by police in Quang Tri province for involvement in a dispute. The three men claimed they were forced to write statements saying they volunteered to spend five days at the police station.

Freedoms of Assembly, Association, and Movement

In May, police used excessive force to disperse pro-environment marches in Hanoi and Ho Chi Minh City. Many protesters reported that they were beaten and detained for hours. Several protesters, including Vo Chi Dai Duong, Dang Ngoc Thuy, Cao Tran Quan, Xuan Dieu, and Nguyen Tan, were taken to administrative detention centers where they were kept for several days without access to legal counsel or due process.

Restrictions on freedom of movement are used to prevent bloggers and activists from attending public events, such as protests, human rights discussions, or trials of fellow activists. In May, police detained prominent rights campaigner Nguyen Quang A and influential blogger Pham Doan Trang to prevent them from attending a private meeting with United States President Barack Obama during his visit to Vietnam. Nguyen Quang A reported that between late March and early August 2016 police detained him six times to prevent him from meeting with foreign diplomats and delegations including Germany, the United States, the European Union, and Australia.

During the first eight months of 2016, the People’s Court of Gia Lai province convicted at least nine Montagnards, including Gyun, Thin, Dinh Ku, A Tik, A Jen, Siu Doang, Ksor Pup, Siu Dik, and Ksor Phit, for participating in independent religious groups not approved by the government. They were charged for “undermining national unity” under article 87 and sentenced to between five and eleven years in prison.

Another common form of harassment that authorities continue to use against independent religious groups is forced denunciation of their faith. In April, state media reported that more than 500 followers of the outlawed Dega Protestants “voluntarily renounced” their faith in Chu Puh district, Gia Lai province. This constitutes a violation of freedom of belief, which is not subject to limitation under international human rights law.

Vietnamese courts remained firmly under the political control of the government and the VCP. Trials of rights bloggers and activists consistently failed in 2016 to meet international fair standards. Police regularly intimidated and in some cases detained family members and friends who tried to attend trials.

In March, Hanoi police detained a number of activists, including Nguyen Dinh Ha and Nguyen Quang A, for trying to attend the trial of blogger Nguyen Huu Vinh. In August, police in Khanh Hoa province reportedly dragged Nguyen Thi Nay by the hair and detained her for several hours for trying to approach the court during the trial of her son, Nguyen Huu Quoc Duy.

Thousands of people who use drugs, including children, continue to be held without due process in government detention centers, where they are forced to work in the name of “labor therapy,” a practice that violates prohibitions of forced labor under Vietnamese and international law. According to state media, during the first three months of 2016 alone more than 1,000 people were sent to mandatory centers in and around Ho Chi Minh City. Violations of center rules and failure to meet work quotas are punished by beatings and confinement to disciplinary rooms where detainees are deprived of food and water.

In November 2015, the National Assembly approved a bill to legalize sex reassignment surgery and to introduce the right to legal gender recognition for transgender people who have undergone such surgery. The law allows people who wish to undergo gender affirming surgeries to do so in Vietnam rather than abroad, and to change the gender marker on official documents—a small, but significant step toward recognizing transgender people’s rights. A UNESCO study highlighted bullying—usually in the form of verbal insults from peers and teachers—of lesbian, gay, bisexual, and transgender (LGBT) students in Vietnam’s schools.

The dynamics of Vietnam’s foreign relations are complex. Although Hanoi maintains close economic ties to China, one of its largest trade partners, it is engaged in major disputes with Beijing over maritime territory. In recent years, it has forged closer military and economic relations with the US. Vietnam is also an active participant in the Association of Southeast Asian Nations, and sustains ties with Japan, the EU, India, and Australia.

In 2016, as in previous years, the US consistently raised human rights concerns in bilateral meetings and repeatedly called on Vietnam to release political prisoners, but has not directly connected human rights improvements to better diplomatic ties. Even as Vietnam continued to harass and arrest dissidents and failed to implement meaningful reforms, the Obama administration continued to press the US Congress and Vietnam’s National Assembly to ratify the Trans Pacific Partnership, and rewarded the government during President Barack Obama’s May 2016 visit by lifting a decades-old arms embargo on Vietnam.

The EU and Australia, focusing on commercial relations, made limited efforts to support detained activists or otherwise advocate for improved respect for basic rights in Vietnam. In June, the European Parliament adopted a resolution on the human rights situation in Vietnam. Japan and India continued to remain silent on Vietnam’s abysmal rights record.