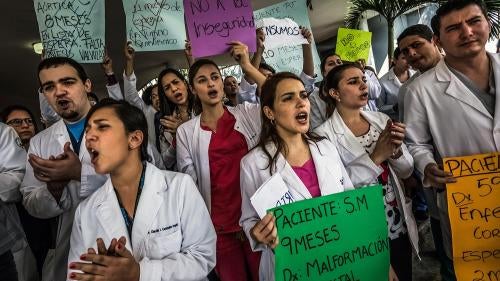 Under the leadership of President Hugo Chávez and now President Nicolás Maduro, the accumulation of power in the executive branch and erosion of human rights guarantees have enabled the government to intimidate, persecute, and even criminally prosecute its critics.

Severe shortages of medicines, medical supplies, and food have intensified since 2014, and weak government responses have undermined Venezuelans’ rights to health and food. Protesters have been arbitrarily detained and subject to abuse by security forces.

Police and military raids in low-income and immigrant communities have led to widespread allegations of abuse. 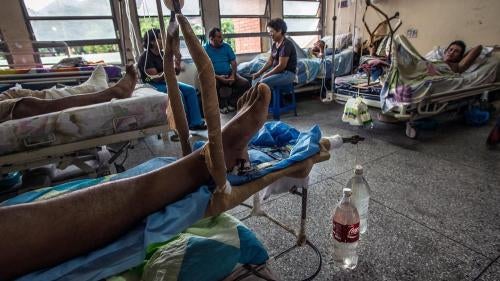 Opposition leader Leopoldo López is serving a 13-year sentence in a military prison for his alleged role in inciting violence during a demonstration in Caracas in February 2014, despite the lack of any credible evidence linking him to a crime. Several others arbitrarily arrested in connection with 2014 anti-government protests remain under house arrest or in detention awaiting trial.

In 2016, the Bolivarian National Intelligence Service (SEBIN) detained dozens of people on allegations of planning, fomenting, or participating in violent anti-government actions, including some that were in fact peaceful protests. Many say they have been tortured or otherwise abused in custody, or that they were unable to see their families or lawyers for hours, occasionally days, after arrest. In several cases, prosecutors failed to present any credible evidence linking the accused to crimes. In some, the evidence included possession of political materials, including pamphlets calling for the release of political prisoners.

On August 29, intelligence agents detained Yon Goicoechea, an activist of the Popular Will opposition party, as he was driving to a press conference about an opposition rally scheduled for September 1. Goicoechea’s family and lawyer received no official information about his whereabouts for more than 56 hours. A judge subsequently charged Goicoechea with several crimes and ordered his pretrial detention.

In early 2014, the government responded to massive anti-government protests with brutal force. For several weeks, security forces used excessive force against unarmed protesters and bystanders, and tolerated and sometimes collaborated directly with armed pro-government gangs that attacked protesters with impunity. Detainees were often held incommunicado on military bases for 48 hours or more before being presented to a judge, and in some cases, suffered abuses including severe beatings, electric shocks or burns, and being forced to squat or kneel without moving for hours.

Protesters continue to be subject to prosecution for participating in peaceful demonstrations. José Gregorio Hernández Carrasco, a university student, was detained in May 2016, two days after he participated in an anti-government demonstration in Caracas. He said he was beaten and tortured and finally agreed to sign a confession. The torture techniques included electric shocks, choking him with a plastic bag, and placing a stick on his rectum and threatening to rape him with it. Hernández Carrasco was released in July, but remains subject to criminal prosecution.

In 2016, Venezuelans reported being arrested during street protests over food scarcity—some organized and some spontaneous—and being subject to mistreatment while in detention. Doctors and nurses in public hospitals who have spoken out publicly about the humanitarian crisis report being threatened with the loss of their jobs.

In February 2016, Attorney General Luisa Ortega Díaz said that 245 people had been killed during OLP raids in 2015, in incidents in which “members of various security forces participated.” Dozens more have been killed since in 2016, according to media. Government officials have routinely said that those killed died during “confrontations” with armed criminals. Yet in at least 20 cases, families of victims or witnesses said that there was no confrontation. In several cases, victims were last seen alive in police custody.

Severe shortages of food make it extremely difficult for many people to obtain adequate nutrition. In a 2015 survey by civil society groups and two Venezuelan universities, 87 percent of interviewees nationwide—most from low-income households—said they had difficulty purchasing food. Twelve percent were eating two or fewer meals a day.

The Venezuelan government has downplayed the severity of the crisis. Its own efforts to alleviate the shortages have not succeeded and it has made only limited efforts to obtain available international humanitarian assistance.

Since former President Chávez and his supporters in the National Assembly conducted a political takeover of the Supreme Court in 2004, the judiciary has ceased to function as an independent branch of government. Members of the Supreme Court have openly rejected the principle of separation of powers, and publicly pledged their commitment to advancing the government’s political agenda.

Since the opposition assumed the majority in the National Assembly in January 2016, the Supreme Court, upon President Maduro’s request for a constitutional analysis, has struck down almost every law passed. In October, it removed the budgetary authority from Congress, allowing the president to adopt the 2017 budget by a decree to be approved by the Supreme Court.

Judge María Lourdes Afiuni continues to face criminal prosecution as a result of a 2009 ruling in which she authorized the conditional release of a government critic. Afiuni’s ruling was in line with a recommendation by international human rights monitors. After a year in prison and two under house arrest in pre-trial detention, she was released but remains subject to criminal prosecution on charges including abuse of authority.

For more than a decade, the government has expanded and abused its powers to regulate media and has worked aggressively to reduce the number of dissenting media outlets. Existing laws grant the government power to suspend or revoke concessions to private media if “convenient for the interests of the nation,” allow for arbitrary suspension of websites for the vaguely defined offense of “incitement,” and criminalize expression of “disrespect” for high government officials. While some newspapers, websites, and radio stations criticize the government, fear of reprisals has made self-censorship a serious problem.

Security forces detained, interrogated, and confiscated the equipment of several journalists in 2016. On September 3, Braulio Jatar, a prominent Venezuelan journalist born in Chile who directs an independent digital outlet in Nueva Esparta State, went missing after he covered a spontaneous pot-banging protest against President Maduro in a pro-government neighborhood on Margarita Island. His coverage had received widespread attention in Venezuela and internationally. His family did not know his whereabouts for more than 36 hours. A prosecutor later charged Jatar with money laundering—which carries a sentence of up to 15 years in prison—in connection with approximately US$25,000 cash that he allegedly had in his car. Jatar says the evidence was planted. At time of writing, Jatar was in pretrial detention.

Government measures to restrict international funding of nongovernmental organizations—combined with unsubstantiated accusations by government officials and supporters that human rights defenders are seeking to undermine Venezuelan democracy—create a hostile environment that undermines the ability of civil society groups to promote human rights.

In May, President Maduro issued a presidential decree that—in addition to declaring a “state of exception” and granting himself the power to suspend rights—instructed the Foreign Affairs Ministry to suspend all agreements providing foreign funding to individuals or organizations when “it is presumed” that such agreements “are used for political purposes or to destabilize the Republic.” Maduro has extended the state of exception twice, in September and November.

In 2010, the Supreme Court ruled that individuals or organizations receiving foreign funding can be prosecuted for treason. The National Assembly that year enacted legislation blocking organizations that “defend political rights” or “monitor the performance of public bodies” from receiving international assistance.

In June, dozens of workers from the customs and tax agency were fired in apparent retaliation for having supported the recall of President Maduro. Media reports say that hundreds of other referendum supporters nationwide were fired under similar circumstances, and that a government program that distributes food and basic goods at government-capped prices discriminated against government critics.

Corruption, weak security, deteriorating infrastructure, overcrowding, insufficient staffing, and poorly trained guards allow armed gangs to exercise effective control over inmate populations within prisons. The Venezuelan Observatory of Prisons, a human rights group, reported that 6,663 people died in prisons between 1999 and 2015. As of July, average overcrowding of 210 percent plagued Venezuelan prisons, according to the Observatory.

In March, four inmates and a prison guard died when detainees and security officers clashed at the Fénix Penitentiary Center in Lara State. Fifty-two detainees, four prison guards, and the prison director were injured. The press has reported other violent prison incidents in 2016, in which at least 20 more people died.

In May 2016, OAS Secretary General Luis Almagro presented a report on the humanitarian and human rights crisis in Venezuela, and called for invocation of the Inter-American Democratic Charter—an agreement protecting human rights and democratic guarantees in OAS member states. The OAS Permanent Council in June rejected Venezuela’s contention that a debate on the report violated its sovereignty, and a majority of member countries voted to move forward and evaluate Venezuela’s compliance with the charter. In November, Venezuela walked out of a Permanent Council meeting when the body adopted a resolution supporting dialogue between the government and opposition, arguing the resolution violated its sovereignty.

A dialogue between the government and opposition that began in early 2016, led by former Spanish president José Luis Zapatero, failed to deliver meaningful results. In October, the Vatican announced it would mediate between the sides and subsequently participated in a series of meetings that led to the November release of a handful of political prisoners and a vague joint statement on the need for international assistance to address the humanitarian crisis and for appointment of new members to the National Electoral Council.

In September, Argentina, Brazil, Paraguay, and Uruguay blocked Venezuela from assuming the presidency of the regional trading bloc, Mercosur.

The government withdrew from the American Convention on Human Rights (IAHCR) in 2013, leaving citizens and residents unable to request intervention by the Inter-American Court of Human Rights when local remedies for abuses committed since that date are ineffective or unavailable. The IACHR continues to monitor Venezuela, however, applying the American Declaration of Rights and Duties of Man, which does not require states’ ratification.

In 2015, President Barack Obama issued an executive order imposing targeted sanctions against seven Venezuelan government officials. In July 2016, the US Congress extended through 2019 its ability to freeze assets and ban visas of those accused of committing abuses against anti-government demonstrators during the 2014 protests.