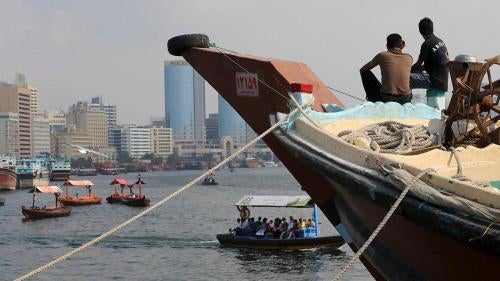 The United Arab Emirates’ intolerance of criticism continued in 2016 with the prosecution of an Emirati academic and a Jordanian journalist, among others, for exercising their right to free expression.

UAE courts acquitted several Libyan nationals whom they forcibly disappeared in 2015, and who had made credible allegations of torture in state security detention. Further evidence emerged regarding the frequent mistreatment of detainees.

UAE residents known to have spoken with international rights groups are at serious risk of arbitrary detention and imprisonment. The UAE’s 2014 counterterrorism law provides for the death penalty for people whose activities are found to “undermine national unity or social peace,” neither of which are defined in the law.

The trial of Emirati academic Nasser bin-Ghaith, whom authorities forcibly disappeared in August 2015 and whose whereabouts remained unknown at time of writing, began at the Federal Supreme Court in April 2016. Media reports on the trial indicate that he is accused of violating various provisions of the penal code, a 2012 cybercrime law, and a 2014 counterterrorism law. Some of these charges, according to local media reports, relate to “six tweets and images ridiculing the Egyptian president and government.”

UAE-based Jordanian journalist Tayseer al-Najjar informed his family that his detention in 2016 is related to his online criticism of Israeli military actions in Gaza and Egyptian security forces’ destruction of tunnels between Gaza and the Sinai region of Egypt.

In another case involving the UAE’s state security apparatus, the son of an adviser to former Egyptian President Mohamed Morsy claimed that UAE authorities subjected him to “brutal physical and psychological torture” to get him to confess to membership in the Muslim Brotherhood. The allegation echoes numerous others that state security detainees have made since 2012.

In March, a Dubai court acquitted British businessman David Haigh of charges brought under the UAE’s cybercrime laws. Haigh claimed after his release that Dubai police had punched and tasered him in an unsuccessful effort to make him confess to accusations of fraud. Haigh said that he regularly witnessed prison officers beating inmates during his two years of incarceration. Haigh said he was not able to see the evidence against him at his trial and that he was not able to give evidence or cross-examine witnesses.

A June report from Citizen Lab, a research institute at the University of Toronto that focuses on internet security and human rights, identified a series of digital campaigns against UAE dissidents, dating back to 2012. Citizen Lab described the operator of these campaigns as “a sophisticated threat actor,” and said that it was implausible that a state-actor was not behind the campaign. The research identified several pieces of information suggesting a connection between the operator and the UAE government.

In August 2016, Apple issued a software update to all iPhone users after Citizen Lab identified flaws in its operating system that an Israel-based software company, NSO, had exploited in an attempt to place spyware on the phone of leading Emirati human rights activist Ahmed Mansoor.

Foreigners account for more than 88.5 percent of UAE residents, according to 2011 government statistics and many low-paid migrant workers remain acutely vulnerable to forced labor, despite some reforms.

A Labor Ministry decree outlining the rules for terminating employment and granting work permits to new employees took effect in 2016. These rules partly govern how the kafala visa-sponsorship system operates in the UAE and should theoretically make it easier for workers to change employers before their contract ends if their rights are violated.

Another Labor Ministry decree that took effect in January 2016 could help protect low-paid migrant workers from the practice of contract substitution, in which workers receive lower wages than those they initially agreed to, a practice that can lead to forced labor. The new decrees do not apply to domestic workers, who are explicitly excluded from UAE labor law protections.

Federal law No. 28 of 2005 regulates matters of personal status in the UAE, and some of its provisions discriminate against women. For instance, the law provides that, for a woman to marry, her male guardian must conclude her marriage contract; men have the right to unilaterally divorce their wives, whereas a woman who wishes to divorce her husband must apply for a court order; a woman can lose her right to maintenance if, for example, she refuses to have sexual relations with her husband without a lawful excuse; and women are required to “obey” their husbands. A woman may be considered disobedient, with few exceptions, if she decides to work without her husband’s consent.

In 2010, the Federal Supreme Court issued a ruling—citing the penal code—that sanctions husbands’ beating and inflicting other forms of punishment or coercion on their wives, provided they do not leave physical marks.

UAE law permits domestic violence. Article 53 of the UAE's penal code allows the imposition of “chastisement by a husband to his wife and the chastisement of minor children” so long as the assault does not exceed the limits prescribed by Sharia, or Islamic law.

The law on juvenile offenders provides that the punishment of whipping may be imposed on children over the age of 16 for murder, assault and battery, alcohol-related offences, theft, or sexual intercourse outside marriage.

The UAE’s penal code does not explicitly prohibit homosexuality. However, article 356 of the penal code criminalizes (but does not define) “indecency,” and provides for a minimum sentence of one year in prison. In practice, UAE courts use this article to convict and sentence people for zina offenses, which include consensual sexual relations outside heterosexual marriage and other “moral” offenses, including same-sex relations.

Different emirates within the UAE have laws that criminalize same-sex sexual relations, including Abu Dhabi where “unnatural sex with another person” can be punished with up to 14 years in prison, and Dubai which imposes 10 years of imprisonment for sodomy.

The UAE maintained its military involvement in Yemen, where it is assisting in the Saudi-led military campaign against Houthi forces, also known as Ansar Allah. It is unclear if the UAE air force is still taking part in coalition airstrikes, but Emirati troops remain on the ground in the south of the country.