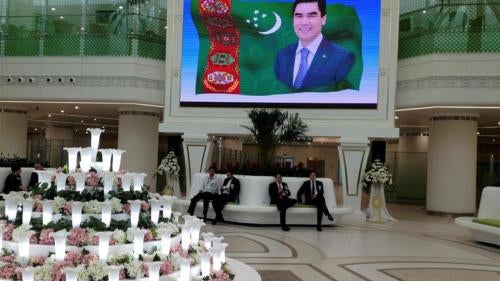 Turkmenistan is among the world’s most repressive and closed countries, where the president and his associates have total control over all aspects of public life. A new draft constitution approved in 2016 allows lifetime presidency.

The government ruthlessly punishes any alternative political or religious expression and exerts total control over access to information. Independent critics and their families, including in exile, face constant threat of government reprisal. Authorities continue to impose informal and arbitrary travel bans on activists and relatives of exiled dissidents, and others. Dozens of people remain forcibly disappeared presumably in Turkmen prisons.

Authorities continue to forcibly mobilize citizens to be present for state events and often take extreme measures in preparation for President Gurbanguly Berdymuhamedov’s visits within the country. According to the Turkmen Initiative for Human Rights (TIHR), a Vienna-based group, in April four families in Akhal region were not allowed to bury their deceased relatives and hold funerals until after the president’s visit ended.

In September, parliament approved a new constitution that allows President Berdymuhamedov to remain in power for life by removing the 70-year age limit for presidential candidates and extending the presidential term of office from five to seven years. There are no presidential term limits.

The new constitution does not ban censorship and does not provide for the right to travel abroad. The Turkmen government did not incorporate recommendations on the draft made by the Office for Democratic Institutions and Human Rights of the Organization for Security and Co-operation in Europe (OSCE).

Civil society activists face constant threat of government reprisal. In October alone, authorities arrested three activists. Two had monitored forced labor; authorities released one of them after 10 days, and in November a court sentenced the other to three years on bogus fraud charges. The third, Galina Vertryakova, was arrested on bogus extortion charges after she had posted comments critical of the government on Russian social media. At time of writing she was in custody pending investigation and trial.

Unknown individuals, presumably acting as government proxies, sought to intimidate exiled activists into silence. In August, two masked men in Moscow attempted to abduct Akmukhammet Baikhanov, a Turkmen dissident, one month after he published a book exposing abuses in Ovadan-Tepe, a prison notorious for torture, horrific conditions, and for holding political prisoners. In April, authorities in Turkmenistan briefly detained his brother, making clear the detention was related to Baikhanov’s criticism.

Authorities harassed family members of Geldy Kyarizov, a prominent horse breeding expert who fell out of favor with the government. Kyarizov had served nearly six years in prison in the 2000s, following a conviction on fabricated charges, and was allowed to leave the country in 2015. In November 2015, after Kyarizov’s first public interview about his prison ordeal, authorities blocked his family’s communication with him and threatened his brothers, detaining one on false drug charges and then releasing him. In March, Kyarizov received repeated verbal threats against him and his family.

There is no media freedom in Turkmenistan. The state controls all print and electronic media. Foreign media outlets can very rarely access Turkmenistan, and local stringers for foreign outlets face harsh government retribution.

Saparmamed Nepeskuliev, a freelance correspondent for RFE/RL and Alternative News of Turkmenistan, an exile-run news website, continued to serve a three-year prison sentence, issued in August 2015, following his conviction on fabricated narcotics charges. In December 2015, the United Nations Working Group on Arbitrary Detention recognized Nepeskuliev as a victim of arbitrary detention for having peacefully exercised his right to freedom of expression.

In October, police questioned another RFE/RL journalist, Soltan Achilova, after she took photographs of a supermarket line. Shortly thereafter unknown assailants attacked and robbed her, taking her camera. She suffered light injuries. The day after Human Rights Watch published a news release about her ordeal, other unknown people tried to assault her, warning her to stop taking photographs.

In August 2016, Turkmen authorities requested that Belarus extradite Chary Annamuradov, a former dissident and independent journalist. Annamuradov is a citizen of Sweden, where he has had asylum since 2003, after fleeing persecution in Turkmenistan. Belarusian authorities arrested Annamuradov upon arrival for vacation in July, pursuant to an international arrest warrant, and in September denied the extradition request.

In September, unknown individuals kidnapped Annamuradov’s brother, Altymurad, from his home in Turkmenistan and held him for four days, during which they severely beat him and questioned him about his brother. Altymurad Annamuradov died shortly after his kidnappers returned him home.

The Turkmen government has forcibly dismantled most private satellite dishes, and internet access in Turkmenistan remains limited and heavily state-controlled. Internet in Turkmenistan is among the most expensive worldwide, according to Stay Mobile, an independent internet industry news aggregator. Throughout 2016, users faced constant obstacles accessing mobile internet. In June, access to Skype and Line messengers was jammed. The government monitors all means of communications.

In June, authorities allowed Aitzhamal Rejepova, the daughter of an exiled dissident, and her two young children to travel abroad for a family visit, after dropping a 13-year travel ban.

However, in most other cases, dissidents’ relatives remain barred from foreign travel in 2016. Examples include the Ruzimatov family, relatives of an exiled former official, and Aidogdy Kurbanov, son of an exiled, politically active Turkmen businessman.

A new religion law adopted in March further tightens requirements for registering religious organizations, for example by increasing from 5 to 50 the number of required founders. Unregistered congregations or religious groups are banned. Religious literature is subject to obligatory state censorship. There is still no alternative military service and objectors are subject to persecution.

In February, several congregants of the Greater Grace Church, a Protestant group, were fined 500 manat (US$140) each for possessing “illegal religious literature,” and four others were detained, held for questioning, and released. State service officers confiscated their religious literature, phones, and money.

The number of those jailed on political grounds is impossible to determine because the justice system is utterly opaque, trials are closed in sensitive cases, and severe repression precludes independent monitoring of these cases.

Political dissident Gulgeldy Annaniazov, arrested in 2008, continues to serve an 11-year prison sentence on charges that are not known even to his family. There had been no information about Annaniazov’s whereabouts in custody until September 2015, when a Turkmen official publicly stated that he had been transferred to a prison facility where he could be visited. At time of writing, Turkmen authorities had not directly informed Annaniazov’s family about his transfer.

Dozens of people, many of whom were imprisoned under former President Saparmurad Niyazov, remain victims of enforced disappearance. Following their arrest, the government denied them access to families, and the fate of many remains unknown. In 2014, the UN Human Rights Committee recognized Boris Shikhmuradov, the former foreign minister, as a victim of enforced disappearance and stated that the Turkmen government must release him. The Turkmen government has not replied to the committee or carried out its recommendations.

Prove They Are Alive, an international campaign against enforced disappearances in Turkmenistan, confirmed the deaths in custody of three forcibly disappeared people. Their bodies were returned to their families. Yolly Gurbanmuradov, a former deputy minister overseeing the gas industry, died in December 2015. Annadurdy Annasakhedov, the former head of the department of counterintelligence, died in February, and Vekil Durdyev, a former state security officer, died in August. Both had been sentenced in closed trials in 2003 relating to an alleged coup attempt in 2002.

Torture is a grave problem, particularly in high-security facilities. The International Committee for the Red Cross does not have full and independent access to Turkmen prisons and individual prisoners.

In January, the government approved a National Human Rights Action Plan that makes no mention of torture. The plan commits to facilitating visits by the UN special rapporteurs on human rights defenders and on the independence of judges and lawyers by 2018. They are among the 13 UN experts who have requested, but not received, access to the country.

Turkmenistan's vast gas reserves dominate the country’s relationships with its international partners whose response to the human rights situation in Turkmenistan has remained overly muted. In a rare exception to this approach, in May, the European Parliament Committee on Foreign Affairs (AFET) postponed final ratification of the Partnership and Cooperation Agreement (PCA) that governs bilateral relations and cooperation between EU and Turkmenistan, citing human right concerns.

In August, German Chancellor Angela Merkel met with President Berdymukhamedov in Berlin. Merkel publicly called for international expert review of the draft constitution and noted that the two had agreed to allow foreign diplomats to visit prisons in Turkmenistan, pending further negotiations.

The United States flagged general concerns about human rights during its October 2015 US-Turkmenistan Annual Bilateral Consultations. During his November 2015 visit to Turkmenistan—the first US secretary of state visit since 1992—John Kerry merely noted that he discussed the “human dimension” with President Berdymukhamedov.

During its annual human rights dialogue with Turkmenistan in May, the European Union raised a range of issues, and urged Turkmenistan to provide information about the fate and whereabouts of disappeared prisoners and to free a number of specific prisoners whose names were not made public.