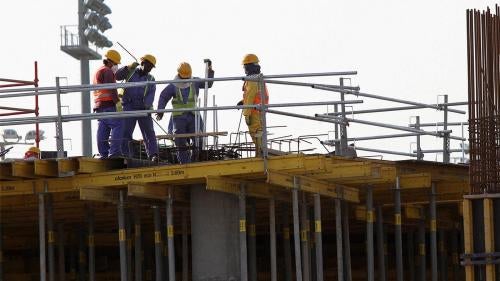 Low-paid migrant workers continued to face abuse and exploitation, and reforms that took effect in 2016 leave the exploitative elements of the old kafala (sponsorship) system in place and do not cover domestic workers. Qatar-based journalists criticized the manner in which the authorities applied the provisions of a 2014 cybercrime law.

Less than 10 percent of Qatar’s population of 2.1 million are Qatari nationals. The country has been increasingly dependent on migrant labor as Qatar continued to build stadiums and develop infrastructure in preparation for hosting the 2022 FIFA World Cup.

Low-paid migrant workers, mostly from Asia and to a lesser extent Africa, continued to face abuse and exploitation. Workers typically pay exorbitant recruitment fees. Employers regularly take control of workers’ passports when they arrive in Qatar. Many migrant workers complain that employers failed to pay their wages on time, and sometimes not at all.

In December 2016, changes to Qatar’s kafala system came into force. Law No. 21 of 2015, on the regulation of the entry and exit of expatriates and their residency, referred to “recruiters” instead of “sponsors” but left the fundamentally exploitative characteristics of the kafala system in place, whereby a migrant worker’s legal residence in the country continues to be tied to their employer or sponsor.

The new law still requires foreign workers to obtain a “No Objection Certificate” from their current employer in order to transfer legally to another employer before the end of their contracts, as well as permission from an unspecified “competent authority” along with the Interior and Labor and Social Affairs Ministries.

If the contract does not specify any time frame, under the new law workers must wait five years before leaving an employer. The workers also must still obtain exit permits from their employers to leave Qatar. The new law provides for a grievance committee for workers in cases in which sponsors refuse to grant exit visas, but the arbitrary restriction on the workers’ right to leave the country remains in place. In practice, this enables employers to arbitrarily prevent their employees from leaving Qatar and returning to their home country.

Qatar’s labor law prohibits migrant workers from unionizing or engaging in strikes, although they make up 99 percent of the private sector workforce.

The new labor law explicitly excludes domestic workers from its remit, and leaves them still more vulnerable to abuse and exploitation. In addition to labor abuses, many domestic workers faced physical and sexual abuse. A law on domestic workers continued to remain in draft form and has not been made public.

In March, Qatar’s emir pardoned and released the poet, Mohamed al-Ajami, whom an appeal court had sentenced to 15 years in prison in 2013 on the basis of the content of poems posted online that criticized Qatar’s ruling family and other Arab rulers.

Qatar issued a law “on the suppression of electronic crimes” in September 2014. The 2014 law criminalizes the spreading of “false news” on the internet and provides for a maximum of three years in jail for anyone who posts online content that “violates social values or principles,” or “insults or slanders others.”

Authorities used the law to detain a journalist from an independent news website, Doha News, after he wrote an article naming a man convicted of a serious criminal offence. Authorities did not press charges, but a Doha News editorial published in October criticized the manner in which authorities were applying the law, and quoted a Qatari attorney who said the law was “like a knife held close to the necks of writers, activists and journalists.”

Qatar’s penal code provides for a maximum of five years in jail for criticism of the emir.

Qatar’s Law No. 22 of 2006 on family and personal status continues to discriminate against women. Under article 36, a marriage contract is valid when a woman’s male guardian concludes the contract and two male witnesses are present. Article 58 states that it is a wife’s responsibility to look after the household and to obey her husband.

Other than Article 57 of the family law forbidding husbands from hurting their wives physically or morally, and general provisions on assault, the penal code does not criminalize domestic violence or marital rape.

Qatar’s nationality law does not allow Qatari women, unlike Qatari men, married to non-Qatari spouses to pass on their nationality to their children.

Qatar’s penal code punishes “sodomy” with one to three years in prison. Muslims convicted of zina (sex outside of marriage) can be sentenced to flogging (non-married persons) or the death penalty (married persons). Non-Muslims can be sentenced to imprisonment. According to media reports, authorities have flogged dozens of people since 2004, including at least 45 between 2009 and 2011. In 2016, according to media reports, a Dutch woman was arrested after she reported that she was raped. A court handed down a suspended one-year imprisonment sentence for engaging in extramarital sex, and deported her. It also sentenced the man accused of raping her with 100 lashes for having extramarital sex and 40 lashes for drinking alcohol.

Qatar maintained ground troops in Yemen, where they have been assisting the Saudi-led military campaign against Houthi forces, also known as Ansar Allah. In March, France approved the sale of 24 Dassault Rafael fighter jets to Qatar, in a deal worth US$7.5 billion. In September, the US approved the sale to Qatar of 36 Boeing F-15 fighter jets valued at around $4 billion.