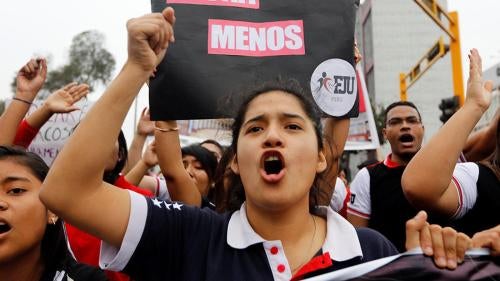 In recent years, security forces have repeatedly wounded and killed civilians when responding to occasional violent protests over mining and other large-scale development projects. These killings steeply decreased in 2016.

Efforts to prosecute grave human rights abuses committed during the 20-year armed conflict that ended in 2000 have had mixed results.

Despite a 2015 law intended to eradicate violence against women, thousands took to the streets of the capital Lima and other cities in August, demanding that the government do more to protect the lives and rights of women.

In August 2016, Interior Minister Carlos Basombrío convened a special commission to investigate what he called “overwhelming indications” that members of the National Police (PNP) engaged in extrajudicial killings. Later that month, Vice Minister of Interior Rubén Vargas confirmed “serious indications” that a group of police officers, including a general, had carried out at least 20 extrajudicial killings between 2009 and 2015, and falsely reported the victims as criminals killed in combat, in order to receive promotions and awards. At time of writing, at least nine PNP members remained under criminal investigation for involvement in the killings.

Security forces reportedly shot dead two protesters in 2016, compared to 12 in 2015. According to local human rights groups, police killed Pedro Valle Sandoval and another unidentified protester on November 6, after protestors blocked a highway in the province of Pataz. Since 2006, security forces have killed at least 130 people during protests in Peru; at least 50 during the administration of Ollanta Humala (2011-2016), and 80 during the second administration of Alan Garcia (2006-2011).

In August 2015, then-President Humala issued a decree that limits the use of force by police. Under the decree, police are permitted to employ lethal force only when it is “strictly necessary” in the face of a “serious and imminent risk” of grave harm. However, Law 30151, passed in January 2014, still grants legal immunity to “armed forces and police personnel who in fulfillment of their duty and using their weapons or other means of defense, cause injury or death.” This amendment to the criminal code eliminated language that made immunity conditional on police using lethal force in compliance with regulations. The law may make it impossible to hold police officers who use lethal force unlawfully accountable.

In a landmark trial, former President Alberto Fujimori was sentenced in 2009 to 25 years in prison for killings and “disappearances” committed in 1991 and 1992. In July 2016, he requested a pardon on humanitarian grounds, but withdrew it in September after newly elected President Pedro Pablo Kuczynski said he would likely reject it. Fujimori’s intelligence advisor, Vladimiro Montesinos, three former army generals, and members of the Colina group, a government death squad, are also serving sentences ranging from 15 to 25 years for the 1991 assassination of 15 people in the Lima district of Barrios Altos, and for six “disappearances.”

Courts have made much less progress in addressing violations, including extrajudicial killings, disapeareances, and torture, committed during the earlier administrations of Fernando Belaúnde (1980-1985) and Alan García (1985-1990).

Only a tiny percentage of the human rights violations committed during the armed conflict had been brought to trial, according to Human Rights Trials in Peru, a project based at George Mason University that monitors human rights prosecutions. In 2016, court hearings continued into their sixth year in the case of torture and disappearances at the Los Cabitos military base in Ayacucho in 1983. Abuses committed in that military base in 1984 and 1985 have been under criminal investigation for over 10 years, but had not been brought to trial at time of writing.

In September 2016, a court convicted 11 former soldiers—including a commander—of a 1985 massacre at Accomarca in which an army unit killed more than 60 civilians. The case had been under criminal investigation for 11 years, including almost 6 years of trial.

Also in July, a prosecutor decided to close the investigation against former President Alberto Fujimori for forced sterilizations of mostly poor and indigenous women committed during his administration. A month later, a higher-ranking prosecutor requested that the closure be reconsidered, but a ruling on his request remained pending at time of writing. More than 2,000 forced sterilizations have been reported to authorities, but human rights groups contend that these represent only a small portion of such cases.

In May 2016, a court ordered that the government pay reparations to victims of abuses committed by both sides of the conflict and their relatives for each of the abuses they suffered, overturning the limits on reparations established by the Peruvian legislature.

In April 2016, a court in Lima convicted the then-director of the newspaper Diario 16, Fernando Valencia Osorio, of defamation and sentenced him to 20 months in prison—which it suspended—and over US$30,000 in fines and compensation in a case brought by former President Alan García. In 2013, Diario 16 suggested that when President Humala said in a speech that that “thieves should be in prison, not in power” he was referring to García.

In May 2016, a court convicted local journalist Carol Villavicencio Lizarraga of defamation and sentenced her to a suspended year in prison and a fine of almost $1,500. She had written a piece in the local magazine El Huacón arguing that a lawmaker had evaded taxes.

The same month, a court convicted reporter Rafael León of defamation and sentenced him to a suspend year in prison and a fine of almost $1,800. León had written a satirical article about how Meier Miró Quesada, a journalist and former editor of newspaper El Comercio, had criticized a former mayor of Lima in an article. A higher court overturned the ruling in September.

Women and girls in Peru remain at high risk of gender-based violence. More than 700 women have been killed in Peru in “femicides” (the killing of a woman in certain contexts, including domestic violence and gender-based discrimination) between 2009 and August 2015, according to official statistics.

In September 2015, Peru’s Congress passed a law that provides for comprehensive measures to prevent and punish violence against women. The law builds on existing judicial measures to protect women at risk, and mandates the creation of shelters to provide temporary refuge from abuse.

Still, in August 2016, thousands demonstrated in Lima and other cities calling on authorities to do more to curb gender-based violence.

In August, a Lima court ordered the national government to distribute free emergency contraceptive pills in public health facilities throughout the country. In 2009, the Constitutional Court had forbidden the free distribution of emergency contraceptive pill, undermining the reproductive rights of women. In its ruling, the court had stated that the decision could be changed if there was “consensus” that pills are not abortive, something the Lima court found in more recent decisions by international courts and statements by the World Health Organization (WHO).

Women and girls in Peru have the right to access abortions only in cases of risk to their health or lives. In July 2014, the Committee on the Elimination of Discrimination Against Women asked Peru to decriminalize abortion when pregnancy was the result of rape and severe fetal impairment. A broad bill to reform the criminal code, which remained pending in Congress at time of writing, would continue to prohibit abortion in these cases. In October, lawmakers from three political parties introduced a bill in Congress to decriminalize abortion in cases of rape and severe fetal impairment.

In March 2015, Congress rejected a bill to recognize civil unions for same-sex couples. In September 2016, a Congressional supporter of President Kuczynski announced that he would introduce a new legislative proposal to recognize same-sex civil unions.

People in Peru are required to appear before a judge in order to revise the gender noted on their identification documents. In an August 2016 report, the human rights ombudsman noted that courts had rejected most of these requests, often applying inconsistent criteria.

In June, the United Nations Working Group on Enforced or Involuntary Disappearances commended the passage of the bill to search for victims of disappearances committed during the armed conflict.