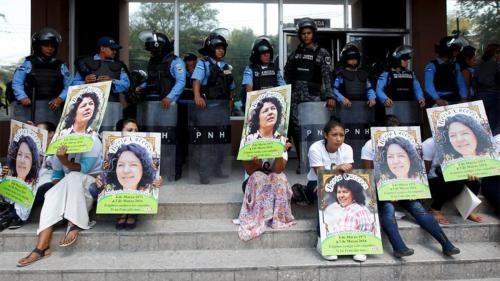 Rampant crime and impunity for human rights abuses remain the norm in Honduras. Despite a downward trend in recent years, the murder rate is among the highest in the world. Journalists, peasant activists, and lesbian, gay, bisexual, and transgender (LGBT) individuals are among those most vulnerable to violence. Berta Cáceres, a prominent environmental and indigenous-rights activist, was killed in March 2016; police had failed to investigate threats on her life.

Efforts to reform the institutions responsible for providing public security have made little progress. Marred by corruption and abuse, the judiciary and police remain largely ineffective.

In April, members of a commission created by an agreement between the Organization of American States (OAS) and the government—the Mission to Support the Fight against Corruption and Impunity in Honduras (MACCIH)—began operating in Honduras. The commission’s mandate includes selecting and overseeing a group of judges, prosecutors, police officers, and forensic scientists to pursue corruption cases.

The use of lethal force by the national police is a chronic problem. Investigations into police abuses are hindered by inefficiency and corruption; little information about them is made public, and impunity is the rule. Efforts to address endemic corruption have made little progress.

In April, police files surfaced showing that high-level commanders, acting under orders from Winter Blanco, a cartel leader from the Caribbean coast, had ordered the 2009 assassination of the chief of the Anti-Drug Directorate, Julián Arístides González Irías, and, two years later, of his adviser, Alfredo Landaverde. A police-reform commission appointed in response to the revelations announced the removal from active duty of 27 police commanders, including two former chiefs of the national police. Foreign Minister Arturo Corrales, a former security minister, resigned.

President Juan Orlando Hernández has expanded the military’s role in combating violent crime. The National Human Rights Commission (CONADEH), in a December 2015 report, listed complaints it has received against the Military Police and Army personnel, alleging abuses that include killings, abductions, torture, rapes, and robberies.

Judges face politically motivated intimidation and interference. In December 2012, Congress voted to remove four of the five justices in the Supreme Court’s Constitutional Chamber after the justices ruled that a law aimed at addressing police corruption was unconstitutional.

The replacement of the four justices was part of a broader pattern of interference. By December 2014, the Council of Judiciary, established in 2011 with authority to appoint and dismiss judges, had fired 29 and suspended another 28, according to the Inter-American Commission on Human Rights (IACHR), although the basis for disciplinary action and the applicable penalties had yet to be defined by law.

The IACHR described Honduras in August as “one of the most hostile and dangerous countries for human rights defenders.” Journalists, lawyers, and human rights defenders suffer threats, attacks, and killings. Twenty-one journalists were murdered from 2014 through May 2016, according to the National Human Rights Commission (CONADEH). Almost all killings of journalists go unpunished.

In 2015, the government enacted a law that created a 14-member National Council for the Protection of Human Rights Defenders (NCPHRD), as well as a “protection system” headed by the Secretariat of Justice, Human Rights, Governance, and Decentralization. The Committee against Torture (CAT) noted that the NCPHRD is moving slowly on 38 petitions for protection received through May 2016.

In March, Berta Cáceres, an indigenous land rights and environmental defender, was shot dead in her home. Although she had reported to police 33 threats on her life, none were investigated. Cáceres, a member of Honduras’ largest indigenous group, the Lenca, had waged a campaign to stop the building of the Agua Zarca Dam, which the activists condemn as a threat to the Gualcarque River. Five men, including an army major and the manager for social and environmental matters for Desarrollos Energéticos (DESA), the firm contracted to build the dam, were arrested in early May for alleged participation in Cáceres’s murder, which prosecutors said was part of a conspiracy with DESA. A sixth suspect was arrested in September.

In July, Honduran television journalist Ariel Armando D’Vicente was convicted of defamation, sentenced to three years in prison, and banned for three years from working as a journalist. The charges arose from a series of reports in 2014, in which D’Vicente linked the police commander of Choluteca Department to cattle smuggling gangs. D’Vicente remains free pending appeal of his conviction.

Homophobic violence is a major problem in Honduras. In June, several United Nations agencies working in Honduras urged the government to investigate killings of LGBTI activists and noted that sexual violence against LGBTI individuals forces them into “internal displacement” or to flee the country in search of international protection.

Fear of gang violence drives hundreds of children every year to leave the country and head north, often unaccompanied. According to a report by UNICEF and the National Violence Observatory of the Universidad Nacional Autónoma de Honduras (UNAH), the number of child homicides rose from 434 in 2014 to 570 in 2015.

Inhumane conditions, including overcrowding, inadequate nutrition, and poor sanitation, are endemic to Honduran prisons. Designed to hold up to 8,600 inmates, the country’s lockups held more than 16,000 in December 2015. Prison guards in many facilities have effectively relinquished control and discipline to the inmates.

In January, the OAS signed an agreement with the Honduran government creating the Mission to Support the Fight against Corruption and Impunity in Honduras (MACCIH). President Hernández had proposed the collaboration in July 2015, after protests demanding a commission similar to Guatemala’s International Commission Against Impunity (CICIG). MACCIH began operating in April.

In November 2015, the Inter-American Court of Human Rights found that Honduras violated the rights of four judges who were dismissed for opposing the 2009 military coup against former President Zelaya. The ruling obligated Honduras to reinstate three of the judges—one had already been reinstated—or, if the government could show reinstatement was not possible, compensate them for lost pay. In response to the ruling, the government claimed that lack of vacant posts prevented reinstatement of the judges, and opted to pay reparations.

The US Congress allotted US$98.3 million in bilateral aid for fiscal year 2016, of which 75 percent was contingent on certification of the government’s progress on issues including the protection of human rights, the combatting of corruption, and the strengthening of public institutions.

On September 30, 2016, the Department of State certified to the US Congress that Honduras has taken effective steps to meet the criteria specified in the Fiscal Year 2016 appropriation legislation.

In June, Honduras signed an agreement with the UN High Commissioner for Refugees (UNHCR) for the opening of a UNHCR office to aid in the protection of people internally displaced by violence, as well as refugees who are returned by the US and Mexico.

In May, in response to Cáceres’ killing and the filing of charges against an employee of DESA, the Dutch development bank, FMO, and the Finnish Fund for Industrial Cooperation, Finnfund, announced they would withdraw their financing for the Agua Zarca Dam.