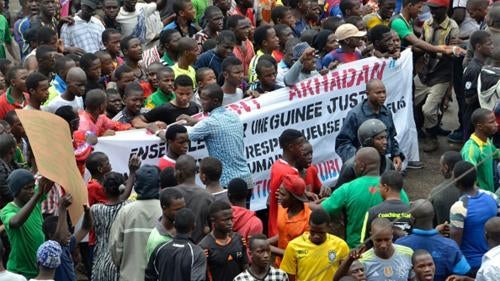 During 2016, the government of President Alpha Conde, who won a second term as president in flawed elections in late 2015, made some gains in consolidating the rule of law and addressing security force violations. A national dialogue between the ruling and opposition parties reduced ethnic and communal tensions and led to a roadmap for long-delayed local elections to be held in early 2017.

However, continued deficiencies within the police and judiciary, along with several risk factors—notably high unemployment, organized crime, and regional insecurity— highlighted the fragility of these gains.

Reports of human rights violations by security forces declined, and authorities demonstrated increased willingness to investigate and sanction those implicated in violations, notably those which had been widely reported in the local media.

Though the government allowed several opposition demonstrations to take place, thereby improving its respect for the right to freedom of assembly, little progress was made on improving access to key economic rights, including health care and primary education. Violence against girls and women remained high.

The judiciary made progress in the investigation into the 2009 stadium massacre of unarmed demonstrators by security forces, but largely failed to investigate other past episodes of state-sponsored violence. The justice ministry embarked on a major reorganization of the judiciary to improve the dispensation of justice, but concerns over prison overcrowding, unprofessional conduct by judicial personnel, and lack of judicial independence remain.

International actors—notably the European Union, United Nations, France, and the United States—focused on ensuring political dialogue between the ruling party and the opposition, though they infrequently pushed for progress on accountability. Donors supported programs to strengthen the rule of law, address unemployment, and improve discipline within the security sector.

Discipline within and civilian control over the security forces appeared to improve as those mandated to respond to civil unrest—the police and gendarmerie—did so with increasing proportionality. However, in several cases, members of the security forces mistreated and at times tortured detainees as they responded to protests and criminality. There were also numerous allegations of unprofessional conduct, including theft and extortion.

In March, a widely circulated cell phone video of a criminal suspect being tortured by members of an elite anti-crime unit in Conkary was condemned by the public and government. In May, several officers from the police and the gendarmerie were questioned by investigating judges for physical violence against demonstrators in April. In June, an army colonel was removed from his post after he and several subordinates severely beat and shot residents who they accused of stalling their convoy. In August, a police captain was detained and, at time of writing, was under investigation for excessive use of lethal force that killed a bystander and injured several protestors during a demonstration.

In sharp contrast to the lack of government response following similar incidents in previous years, these cases in 2016 elicited administrative sanctions, investigations, and commitments to deliver justice. However, at time of writing, none of the alleged perpetrators in these cases had yet been held to account.

More than seven years on, Guinea has yet to deliver justice for the grave crimes committed in September 2009, when security forces massacred some 150 opposition supporters and raped over 100 women. The crimes were committed during the military rule of then-Cpt. Moussa Dadis Camara.

The panel of judges appointed in 2010 to investigate the massacre has made important strides despite political, financial, and logistical obstacles. They have interviewed more than 400 victims and charged some 15 suspects, including several high-level members of the security forces and the former junta leader, Camara.

At time of writing several investigative aspects remained outstanding, including the questioning of key witnesses and locating mass graves believed to contain the bodies of some 100 victims who remained unaccounted for.

During 2016, there was little progress in investigating or holding to account members of the security forces or mobs allegedly involved in numerous episodes of political and electoral violence, perpetrated both before and after President Conde took office in 2010.

These include the alleged killing by the security forces of some 130 unarmed demonstrators in 2007, some 60 opposition supporters protesting the delay in holding parliamentary elections in 2013-2014, and at least 10 people in the run-up to the 2015 presidential poll.

There was similarly no accountability for other 2015 election-related abuses including the beating to death of two men and rape of one woman by mobs linked to the opposition, or the extensive looting and destruction of property in markets by mobs associated with the ruling party, at times allegedly in complicity with the security forces.

However, in October, the government agreed to pay reparations to victims of the 2013 political violence, including to the wounded, the families of those killed, and victims of looting and pillage.

In August, the Provisional Commission on National Reconciliation (CPRN) submitted its final report to President Conde. The CPRN was established by presidential decree in 2011 to explore the roots of decades of political and communal violence and present a roadmap for addressing them. The report made 22 recommendations, including the creation of an independent truth-telling commission, justice for key perpetrators, and reparations for victims of political and communal violence.

The National Human Rights Commission (INIDH), established in 2015 and mandated by Guinea’s 2010 constitution, largely failed to fulfil its mandate and suffered from a lack of credibility as a few commissioners quit amid concerns over lack of fiscal transparency.

The year saw the beginning of a major reorganization of the justice system aimed at strengthening its independence, impartiality, and efficiency. The changes are part of a multi-year justice sector reform project and were mandated by a 2015 law which reorganized the judiciary. However, there were concerns that the low budgetary allocation for the judiciary—around 0.5 percent of the national budget—would slow down the implementation of the plan, which mandates the construction and staffing of several new courthouses.

Guinean prisons and detention centers operate far below international standards, with severe overcrowding due to the systematic use of provisional detention, weak case management, and the failure of the courts to meet regularly. Overcrowding and conditions in Guinea’s largest detention facility in the capital Conakry, designed for 300 detainees, worsened in 2016 as it regularly accommodated more than 1500. The construction of a new prison to address overcrowding stalled. An estimated 60 percent of prisoners in Guinea are held in prolonged pretrial detention. Unprofessional conduct in the judicial sector, including absenteeism and corruption, contribute to persistent detention-related abuses.

The Superior Council of Judges (Conseil Supérieur de la Magistrature), established in 2015, continued to fulfill its mandate to investigate and discipline judges. During 2016, some 20 cases were investigated by the CSM, and several judges sanctioned for corruption and unprofessional conduct.

In September, the Guinean government and local organizations launched a campaign to combat female genital mutilation (FGM). An estimated 97 percent of women and girls aged 15 to 49 years have undergone FGM, despite laws banning and criminalizing the practice. In a rare case in January 2016, three women were tried and convicted in a court in Kankan for performing FGM.

In May, UNICEF, OHCHR, and UNFPA reported that since 2015 more than 50 children have been raped, the majority less than 5 years old.

In April, Guinea acceded to the Optional Protocol to the Convention on the Rights of the Child on the involvement of children in armed conflict. In July, Guinea’s National Assembly passed a new criminal code that abolished the death penalty and, for the first time, criminalized torture.

However, the new code failed to codify several abuses as torture, including electric shocks, stress positions, mock executions, and simulated drowning, defining them instead as “inhumane and cruel” treatment. The new code also retained laws criminalizing and carrying penalties of up to five years for defamation and “insults” directed at public figures, as well as laws criminalizing “unnatural acts,” carrying terms of 6 months to 3 years in prison.

UN Special Representative on Sexual Violence in Conflict Zainab Bangura—whose office continued to support accountability for rapes and crimes committed during the 2009 stadium massacre—visited Guinea twice: in April, jointly with US Under Secretary of State for Civilian Security, Democracy, and Human Rights Sarah Sewall, and in August to encourage progress on investigation.

The International Criminal Court (ICC), which in October 2009 confirmed that the situation in Guinea was under preliminary examination, continued to engage the national authorities on progress in the investigation.