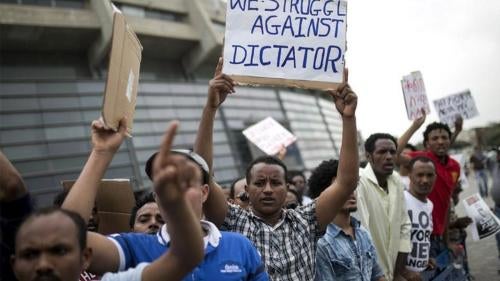 After 25 years of rule by unelected President Isaias Afewerki, Eritrea’s citizens remain subjects of one of the world’s most oppressive governments.

In May 2016, a United Nations Commission of Inquiry (CoI) established by the Human Rights Council in its final report said it found reasonable grounds to believe the government has committed numerous crimes against humanity. The government’s “totalitarian practices” and disrespect for the rule of law manifested “wholesale disregard for the liberty” of Eritrea’s citizens, the CoI concluded.

In turn, the council by resolution “condemn[ed] in the strongest terms” Eritrea’s “systematic, widespread and gross human rights violations” and asked the General Assembly to submit the commission reports to all “relevant organs of the UN.” The General Assembly took no public action on that recommendation at its October 2016 session.

By law, each Eritrean is compelled to serve 18 months in national service starting at 18 but in practice conscripts serve indefinitely, many for over a decade. Endless conscription remains a principal driver of migration. The CoI concluded that conditions of national service rise to the crime of enslavement.

Conscripts are often assigned to arduous non-military construction and agriculture projects though some serve in the civil service, education, and other service jobs. Conscripts are used not only in government-related projects, they are used in projects personally benefitting military commanders and other officials.

Treatment of conscripts is often harsh, depending on the whim of the commander. Physical abuse, including torture, occurs frequently; so does forced domestic servitude and sexual violence by commanders against female conscripts. There is no redress mechanism for conscripts facing sexual and other abuses.

Attempts to flee are sternly punished. On April 3, new conscripts trying to escape from a convoy in Asmara were shot at by guards, killing several.

Conscript pay is insufficient to support the conscript, let alone a family. An Eritrean refugee told Human Rights Watch he fled in 2015 after 18 years of service because there was no end in sight. Another said he fled after 10 years because “my family couldn’t survive.” A third said he fled after serving for 12 years because “I couldn’t see any future for my children.”

When Eritrea was discussing a large grant from the European Union in 2015, senior Eritrean officials told diplomats and foreign visitors that the 18-month limit would be applied to new conscripts, though not to those already serving far longer. In February, the government abandoned that proposal.

Instead, President Isaias announced that conscript pay would be raised. His finance minister said pay for conscripts working in the civil service would almost triple; he made no mention of increases for others. At time of writing, there is no evidence that pay had increased for most conscripts.

Repression of Speech, Expression, and Association

President Isaias rules without institutional restraint. No national elections have been held since self-rule in 1991. Eritrea has had no legislature since 2002. The judiciary is subject to executive control and interference. A constitution adopted in 1997 remains unimplemented. Public space to question government policy does not exist. No domestic nongovernmental organizations are permitted.

The government owns all media. In September 2001, the government closed all independent newspapers and arrested its leading journalists. None were brought to trial. They remain in solitary detention, with no access to family members. Former guards have reported about half have died in detention. Eleven former high-level officials who criticized Isaias’s rule were also arrested and detained since 2001. Eritrean authorities have ignored calls, including by the African Commission on Human and Peoples’ Rights and the UN special rapporteur for Eritrea, for their release or at least a judicial hearing.

Less prominent citizens are also subject to arbitrary imprisonment. Very few are given a reason for their arrest. Few, if any, receive trials; some disappear. The length of imprisonment is often indefinite and conditions are harsh.

Although the government issued a new criminal procedure code in 2015, requiring warrants for arrest, access to defense counsel, and other procedural safeguards, including the right to petition for habeas corpus, there is no evidence that any of these protections has been implemented.

The government persecutes citizens who practice religions other than the four it recognizes– Sunni Islam and the Eritrean Orthodox, Roman Catholic, and Evangelical (Lutheran) churches. The government interferes in the practices of the four religions it recognizes. Authorities deposed the patriarch of the Eritrean Orthodox Church in 2006, appointing a successor one year later. The deposed patriarch remains under house arrest over 10 years later.

Security personnel raid private homes where adherents of unrecognized religions meet for prayers, arresting and detaining them. Those arrested are only released after repudiating their religious affiliations.

Jehovah’s Witnesses are especially persecuted. Three arrested 22 years ago, in 1994, for refusing military service remain imprisoned. Fifty-four Witnesses, arrested in 2014 for “unlawful assembly,” admitted guilt in March 2016 and were released with a fine of 500 nakfa (US$35); a lone holdout was sentenced to six months and fined 7,000 nakfa ($470).

In late 2015, the government ordered all paper currency held by citizens be turned in to government banks within six weeks. In February 2016, the government decreed that payments exceeding 3,000 nakfa ($200) could only be made by check

The United Nations refugee agency, UNHCR, reported 474, 296 Eritreans globally to be refugees and asylum seekers at the end of 2015, about 12 percent of Eritrea’s official 3.6 million population estimate.

European countries continue to attempt to stem the flow of asylum seekers and migrants from Eritrea. A Swiss immigration fact-finding mission to Asmara, Eritrea’s capital, in March, however, concluded “proof of improved human rights conditions is still missing” and that involuntary returnees could count on imprisonment and perhaps torture. In October, an appellate tribunal in the United Kingdom held that Eritreans of draft age who left the country illegally and are involuntary returned to Eritrea “face a real risk of persecution, serious harm or ill-treatment”; these abuses, the decision said, violate the European Convention on Human Rights. The UK Home Office amended its immigration policy to conform to the tribunal’s holding.

In May, Sudan expelled over 400 Eritrean refugees and asylum seekers to Eritrea. Most were promptly incarcerated according to CoI witnesses.

Israel for years has refused to allow Eritreans to apply for asylum. In September, an appeals court held that Eritreans must be given individualized hearings, overruling an Interior Ministry policy that from national service evasion or desertion can never be justification for asylum.

Eritrea’s relations with neighboring Ethiopia and Djibouti remain severely strained. After a bloody border war in 1998-2000, Ethiopia occupies slivers of territory identified by an international boundary commission as Eritrean, including the town of Badme where the war began. President Isaias uses the pretext of “no-war, no-peace” for his repressive domestic policies.

Eritrea and Ethiopia both host each other’s armed opposition groups. On June 12-13, border clashes, including artillery fire, erupted near Tsorona, a village just inside Eritrea. President Isaias blamed Ethiopia for the attack but there are conflicting reports of the cause, including that fighting began when armed Eritrean troops chased fleeing conscripts into Ethiopian territory and that Ethiopia responded to an attack by an Eritrea-based rebel group.

Eritrea strengthened its relations with Saudi Arabia and the United Arab Emirates (UAE) in 2016, agreeing in December 2015 to support Saudi Arabia’s military role in Yemen, as part of what Eritrea called “broad strategic cooperation to combat terrorism.” Eritrea has reportedly allowed the UAE to deploy military jets and train Yemeni forces at Assab on the Red Sea coast, where the UAE is building a new port to support its military activities in Yemen.

The UN Security Council continued an arms embargo on Eritrea for another year after its Monitoring Group on Somalia and Eritrea reported Eritrea has not cooperated with the group. The group said Eritrea may have violated the embargo by arming and training anti-Ethiopia and anti-Djibouti militias, using mining income and UAE payments for military purposes, and attempting to buy military equipment in Europe.

Based on Nevsun’s experience, it is likely that the Chinese companies use Eritrean government-owned construction firms for infrastructure development, and by so doing indirectly use national service conscript labor.

After the European Union gave Eritrea a five-year €200 million (approximately $220 million) aid package in 2015, to try to stem migration, the European Parliament in March expressed its opposition and “great concern [over] the continuing deplorable human rights situation and the complete absence of rule of law and media freedom….”