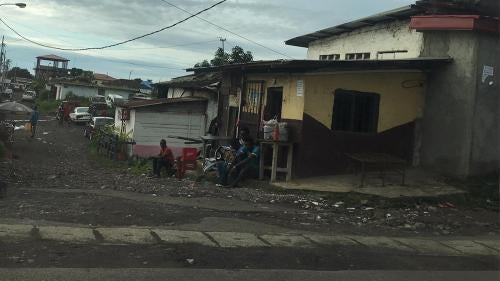 Corruption, poverty, and repression continue to plague Equatorial Guinea under President Teodoro Obiang Nguema Mbasogo, who has been in power since 1979, making him the world’s longest serving non-royal head of state. Obiang won another term in April 2016 elections, which most opposition groups boycotted, citing intimidation and procedural irregularities.

In March, the minister of interior suspended the Center for Development Studies and Initiatives (CEID), the country’s leading civic group and a member of the national steering group of the Extractive Industries Transparency Initiative (EITI), which effectively paralyzed progress toward the country’s reapplication for EITI membership.

In September, a French judged ordered Obiang’s eldest son, Teodorin, to stand trial on money-laundering charges. In an apparent attempt to shield him from accountability, Obiang appointed Teodorin vice president shortly after French prosecutors concluded their investigation, and filed a complaint against France in the International Court of Justice claiming breach of immunity.

Equatorial Guinea is among the top five oil producers in sub-Saharan Africa and has a population of approximately 1 million people. According to the United Nations 2015 Human Development Report, the country had a per capita gross national income of $21,056 in 2014, the highest in Africa. Yet it ranks 138 out of 188 countries in the Human Development Index that measures social and economic development, by far the world’s largest gap between per capita wealth and human development score.

Despite the country’s abundant natural resource wealth, available data, including from the World Bank and the International Monetary Fund, reveal that Equatorial Guinea has failed to provide crucial basic services. About half of the population lacks access to clean water, according to a 2011 joint household survey by government and ICF International, a US firm specializing in health surveys.

In August 2014, Equatorial Guinea reaffirmed its commitment to rejoin EITI, an initiative from which it was expelled in 2010, for its failure to guarantee an “enabling environment” for civil society to fully participate in EITI’s implementation. EITI promotes a standard by which information on the oil, gas, and mining industry is published, requiring countries and companies to disclose information on the key steps in the governance of oil, gas, and mining.

Only a few private media outlets exist in the country, and they are largely owned by persons close to Obiang. Freedom of association and assembly are severely curtailed, and the government imposes restrictive conditions on the registration and operation of non governmental organizations. The few local activists who seek to address human rights-related issues often face intimidation, harassment, and reprisals.

The minister of interior, who also headed the National Electoral Commission, suspended leading civil society group CEID on March 2, one week before the government called for elections. He alleged that comments made during a youth forum organized by CEID two months earlier constituted “messages aimed at inciting violence and civil disobedience among the Equatoguinean youth.” Authorities had earlier cancelled the forum on January 29, 2016, after its first day. CEID accused the government of heavy handedness for suspending the organization because of the comments of some forum participants.

A health ministry official similarly accused a theater group working in collaboration with UNICEF of “inciting the youth” in July and ordered it to stop performing its play on HIV awareness. This was after the official attended a performance session where a member of the audience raised questions as to whether the government was committing sufficient resources to preventing and treating the disease. Last year, the government shut down a cultural center after a minister objected to lyrics of a hip-hop performance as “going against the ideals of the ruling party and unconstitutional,” according to EG Justice, an independent rights group.

The ruling Democratic Party (PDGE) maintains a monopoly over political life. The two-chamber parliament with a total of 170 seats has only one opposition representative in each chamber.

Elections were held on April 24, 2016, after being announced only six weeks in advance. Most opposition parties boycotted the elections citing harassment, procedural irregularities, absence of an independent electoral body, and lack of media access. Obiang’s term was set to end in December 2016, but the government called elections in April, in apparent violation of a constitutional provision that says elections should be held no earlier than 45 days before the end of the president’s term. Obiang ran in the elections after declaring that a 2011 constitutional amendment limiting presidents to two consecutive seven-year terms is not retroactive. He declared victory with 93.7 percent of the vote.

Nine days before the elections, police reportedly arrested the campaign manager of an opposition party that had not boycotted the elections “for disturbing the peace” while he was campaigning with a megaphone, and allegedly beat him at a military base, according to EG Justice. An opposition party also reported that its headquarters was surrounded by army personnel on April 21. The United States embassy in the capital, Malabo, criticized the restrictive atmosphere prior to elections and noted that its election day observers witnessed voter intimidation, violation of voting secrecy, and other irregularities.

Political repression was not limited to election season. In January, police reportedly arrested two members of an opposition party while advertising an authorized party meeting, and held them for nine days without charge, according to EG Justice. A month later, police arrested the son and nephew of the leader of a political opposition party living in exile. He was detained at time of writing. Their lawyer said they were accused of revealing state secrets on a social media post by divulging a government list of “blacklisted political exiles” barred from entering the country. On May 13, police arrested the leader of yet another opposition party and allegedly beat him for several hours while questioning him about his political activities and a critical article he published.

On September 7, a French judge ordered that Obiang’s eldest son, Teodorin, stand trial on charges of corruption, money-laundering, and embezzlement. During the investigation, French authorities seized valuables belonging to Teodorin, including a mansion reportedly worth €180 million (approximately US$196 million), 18 luxury cars, and a €22 million (approximately $24 million) art collection. At the time the purchases were made, Teodorin was minister of agriculture, for which he earned less than $100,000 annually.

French prosecutors formally requested Teodorin be brought to trial in May. Obiang responded by appointing his son vice president and suing France in the International Court of Justice for violating his immunity. The impending French trial comes on the heels of the US Department of Justice’s investigation into Teodorin’s alleged money laundering in the US, where he purchased a $30 million Malibu mansion and a $38.5 million private jet. That case was settled when Teodorin agreed to forfeit $30 million to US authorities that would be repatriated for the benefit of Equatoguineans. The US is expected to determine which charities will receive the funds by the end of 2016.

A Spanish corruption case against several senior government officials, including the president, remains pending. The complaint alleges that the officials purchased homes in Spain through a private company that a US senate investigation revealed had received $26.5 million in government funds at around the same time of the purchases. In September 2015, police arrested a Russian couple and their son who were accused of facilitating the transactions.