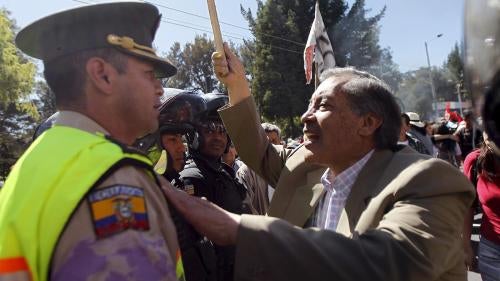 The administration of President Rafael Correa has expanded state control over media and civil society and continues to harass, intimidate, and punish critics. Other persistent concerns include limited judicial independence, poor prison conditions, and far-reaching restrictions on women’s and girls’ access to reproductive health care.
An earthquake on April 16 left approximately 670 people dead and thousands injured and displaced. At time of writing, 2,348 victims continued to live in official shelters. Vulnerable populations, including women and children, remained at particular risk in shelters without adequate security. Some children living in the shelters have not been able to access adequate education.

Hundreds of Ecuadorians took to the streets in December 2015 to protest the National Assembly’s approval of constitutional amendments granting the armed forces powers to assist police in security operations, allowing the president and other elected officials to run for office indefinitely after 2017, and declaring communications a public service—thus granting the government broad powers to regulate media. The day after the protests, a court sentenced 21 people to 15 days in prison for “issuing expressions of discredit and dishonor against policemen.”
In May 2016, a court in Loja province convicted Luisa Lozano and Amable Angamarca, of the Saraguro indigenous community, of interrupting public services by closing roads during protests that called for increased protection of indigenous rights. They were sentenced to four years in prison. In October, after an appeal by the Interior Ministry, three others were sentenced to four years in prison in connection with the same incidents.

A 2013 communications law gives the government broad powers to limit free speech. The law requires all information disseminated by media to be “verified” and “precise,” opening the door to retaliation against media critical of the government as officials decide what meets these vague criteria. It also prohibits “media lynching,” defined as “repeatedly disseminating information with the purpose of discrediting or harming the reputation of a person or entity.” In addition, it prohibits what it terms “censorship,” which, under the law’s definition, includes the failure of private media outlets to cover issues that the government considers to be of “public interest.”
The Superintendency of Information and Communication (SUPERCOM), a government regulatory body created by the 2013 communications law and separate from the Communications Ministry (SECOM), has in dozens of cases ordered media outlets and journalists to “correct” or retract reports, including opinion pieces and cartoons, or to apologize publicly for their content. SUPERCOM has also accused outlets of engaging in “censorship” by not publishing information officials deem important.
In August, SUPERCOM issued a written warning to journalist Janet Hinostroza and the TV channel Teleamazonas, where her daily news show airs, and ordered her to apologize publicly for repeatedly denouncing irregularities in government purchase of medicines. The sanction came eight days after the president, during his Saturday weekly broadcast, accused Hinostroza and Teleamazonas of “media lynching.”
The Correa administration repeatedly used the communications law to order media outlets to publish information favorable to the government and to transmit official broadcasts responding to unfavorable news coverage. In July, SECOM ordered the TV channel Ecuavisa to transmit a 30-minute official broadcast at a time when it was scheduled to air an investigative program criticizing government funding of audiovisual propaganda. Ecuavisa aired part of the investigative program in the time that was left but viewers had to view the rest online.
In July, the brother of Vice President Jorge Glas asked a court to ban a book on their father’s rape conviction. In August, the judge ordered the author to suspend circulation of the book in any form, arguing it undermined the honor of the Glas family.
Criminal defamation remains a concern, despite a 2014 legal reform narrowing the crime’s definition. In June, President Correa brought a defamation complaint against Eduardo del Pozo, the vice mayor of Quito, for saying in a radio interview that Correa had manipulated the justice system to send money abroad without paying taxes. In September, del Pozo was sentenced to 15 days in prison. A higher court ratified the conviction in October.
The president, his political party and its members, state media outlets, and state agencies have repeatedly sought to exploit US copyright law in efforts to have critical images and documents removed from the internet. Users sometimes manage to restore content, after a legal process that can take weeks.
In September, after digital newspaper 4Pelagatos published an article criticizing an opinion piece by President Correa’s daughter in the official newspaper El Telégrafo, 4Pelagatos journalist Martín Pallares received threats from various Twitter accounts, including one from a high-level SECOM official threatening a beating. The photographs, phone numbers, addresses, and geo-location of the homes of Pallares and two other journalists at the newspaper, Roberto Aguilar and José Hernandez, were posted on social networks. María Dolores Miño, a law professor who published an opinion piece referring to Correa’s daughter’s article, also received online threats.

In 2015, President Correa issued a decree confirming broad government powers to intervene in the operations of nongovernmental organizations (NGOs), including the power to dissolve groups on the grounds that they have “compromise[d] public peace” or have engaged in activities different from those they identified when registering with the government.
In August, the education minister dissolved the largest and oldest teachers’ union for allegedly violating a legal obligation to register board members. The dissolution came after the union’s president met with the International Labour Organization (ILO) and the United Nations Human Rights Committee to report on alleged violations of educators’ rights. In September, UN human rights experts noted that the decision seemed “arbitrary, political and lacked any logical connection to a legitimate State interest.”

Corruption, inefficiency, and political interference have plagued Ecuador’s judiciary for years. President Correa received a popular mandate in a 2011 referendum on whether to overhaul the justice system to fix the problems. As part of his sweeping judicial reforms, however, the Council of the Judiciary, which in practice lacks independence from the executive, appointed and removed hundreds of judges, including all magistrates of the National Court of Justice, through highly questionable mechanisms that have undermined judicial independence.

Prison overcrowding and poor prison conditions are long-standing problems in Ecuador. Since 2012, the government has spent millions of dollars to construct new detention centers, but their remote locations and strict and limited visitation rules impede prisoners’ contact with family members.
In August, after the Public Defender’s Office filed a habeas corpus request on behalf of detainees at the Turi detention center in Azuay Province, a series of videos were leaked to the public showing prison guards beating inmates, some of them naked, and subjecting them to electric shocks. In September, a judge approved the habeas corpus request and ordered reparation measures for the inmates.

In July, approximately 150 Cubans were detained during a raid in a park where they were sleeping in tents to protest their inability to obtain a special humanitarian visa from Mexico that would allow them to travel to the US border, and from there, seek asylum in the United States. Judges conducted deportation hearings that did not comply with basic due process guarantees, and ordered the deportation of most of the detainees, including some who had sought asylum in Ecuador. The Cubans were deported before they had an opportunity to appeal the orders and, in some cases, despite judicial orders in their favor.

A truth commission set up by the Correa administration to investigate government abuses from 1984 to 2008 (from the beginning of the repressive presidency of León Febres Cordero until Correa took office) documented 136 cases involving 456 victims, including 68 victims of extrajudicial execution and 17 of enforced disappearance. Progress by a special prosecutorial unit created in 2010 to investigate the cases has been slow. According to government statistics from December 2015, judicial procedures have been initiated in only eight cases.

The right to seek an abortion is limited to instances in which a woman’s health or life is at risk, or when a pregnancy results from the rape of a “woman with a mental disability.” Fear of prosecution drives some women and girls to have illegal and unsafe abortions and impedes health care and services for victims of sexual violence. Fear of prosecution also hinders detection and prevention of sexual and gender-based violence. Government statistics released in 2010, the latest available, indicate that one in four women and girls over 15 years old in Ecuador has been a victim of sexual violence.

In March 2016, the government refused to participate in a hearing on freedom of association before the Inter-American Commission on Human Rights, and said it would not comply with the commission’s recommendations.
In its periodic review of Ecuador in July, the UN Human Rights Committee raised concerns including violence against women, violence in detention centers, the criminalization of abortion, and threats to judicial independence and freedom of expression and association. It also called on Ecuador to carry out timely investigations of cases documented by Ecuador’s truth commission, and bring those responsible to justice.
In 2015 the UN General Assembly elected Ecuador to the Human Rights Council for the 2016-2018 term.
In October, during extraordinary sessions of the Inter-American Court of Human Rights (IACHR) in Ecuador, the court’s president, Roberto Caldas, enthusiastically praised Ecuador’s judicial reform, which led to strong public criticism regarding the lack of judicial independence in the country.
In 2016, the Inter-American Court of Human Rights ruled against Ecuador in two cases—one determining that it is discriminatory to punish officers who allegedly have homosexual sex on military installations, and another sanctioning Ecuador for the arbitrary detention and torture of four foreigners in 1994.
In November, OAS and UN special rapporteurs on freedom of expression sent a joint letter to the Ecuadorian government stating that the Communications Law undermined free speech. The government rejected the experts’ analyses.