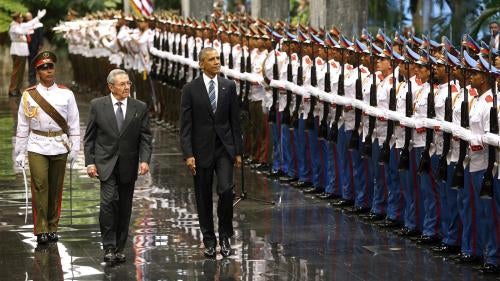 The Cuban government continues to repress dissent and punish public criticism. It now relies less than in past years on long-term prison sentences to punish its critics, but short-term arbitrary arrests of human rights defenders, independent journalists, and others have increased dramatically in recent years. Other repressive tactics employed by the government include beatings, public shaming, and termination of employment.

On November 25, Fidel Castro, who ruled Cuba from 1959 until handing off the presidency to his brother, Raúl, in 2006, died in Havana.

In March, US President Barack Obama visited Cuba, where he met with President Raúl Castro, as well as with representatives of Cuban civil society. President Obama gave a nationally televised address and held a joint press conference with President Castro in which he urged the Cuban government to lift restrictions on political freedoms and reiterated his call for the US Congress to end the economic embargo of the island.

The government continues to rely on arbitrary detention to harass and intimidate critics, independent activists, political opponents, and others. The Cuban Commission for Human Rights and National Reconciliation, an independent human rights group that lacks official authorization and is therefore considered illegal by the government, received more than 7,900 reports of arbitrary detentions from January through August 2016. This represents the highest monthly average of detentions in the past six years.

Security officers rarely present arrest orders to justify the detention of critics. In some cases, detainees are released after receiving official warnings, which prosecutors can use in subsequent criminal trials to show a pattern of “delinquent” behavior.

Detention is often used preemptively to prevent people from participating in peaceful marches or meetings to discuss politics. Detainees are often beaten, threatened, and held incommunicado for hours or days. The Ladies in White (Damas de Blanco)—a group founded by the wives, mothers, and daughters of political prisoners also, like the Cuban Commission on Human Rights, lacks official authorization and is therefore considered illegal by the government. Its members are routinely harassed, roughed up, and detained by either police or state security agents before or after they attend Sunday mass.

Prior to President Obama’s visit in March, police arrested more than 300 dissidents as part of a crackdown on opposition leaders.

The government controls virtually all media outlets in Cuba and restricts access to outside information.

A small number of journalists and bloggers who are independent of government media manage to write articles for websites or blogs, or publish tweets. However, the government routinely blocks access within Cuba to these websites. Moreover, only a fraction of Cubans can read independent websites and blogs because of the high cost of, and limited access to, the internet.

Independent journalists who publish information considered critical of the government are subject to smear campaigns and arbitrary arrests, as are artists and academics who demand greater freedoms.

Lazaro Yuri Valle Roca, a blogger and videographer who often covers the Sunday demonstrations of the Ladies in White, was jailed for five days after trying to cover a protest on March 20, the day of President Obama’s arrival in Cuba. Police officers apprehended Valle Roca, beat him, and took him to a nearby police station, according to Aliuska Gómez García, a member of the Ladies in White who witnessed the beating and arrest and spoke afterwards to the Committee to Protect Journalists. Valle Roca was later accused of attacking an official. While he did not face charges on this occasion, officers warned him that he might if arrested in the future.

In May, police detained journalist Daniel Domínguez López in his office at the Cuban Institute for Freedom of Speech and Press (ICLEP) after he wrote an article about a deprivation-of-property case involving a member of the National Revolutionary Police Force. Police ultimately took him to a “criminal instruction unit,” where he said that they threatened to imprison or kill him and his family. Officers reportedly warned him against further distribution of his bulletin and told him that they were determined to destroy ICLEP.

Police in October detained Maykel González Vivero, a reporter of the news site Diario de Cuba, while he was reporting on the damage caused by Hurricane Matthew. Three days later, police arrested Elaine Díaz, director of the independent news site Periodismo del Barrio and four of her colleagues when they traveled to Baracoa, eastern Cuba, to report on the storm’s effects. She and her team were released a few hours later, as was González, but authorities reportedly confiscated their laptop computers, cameras, and other equipment.

The government harasses artists as well. Police detained Danilo Maldonado, a graffiti artist known as “El Sexto,” during a march led by the Ladies in White movement shortly before President Obama’s visit in March 2016, but released him the following day. The day after Fidel Castro’s death in November, police arrested Maldonado again after he posted an online video mocking Castro’s death and spray painting “se fue” (he’s gone) on a wall in downtown Havana. Police held him incommunicado for 72 hours, inflicting a beating that triggered an asthma attack. After his mother brought an inhaler, his detention continued. He was still detained at time of writing in early December. Two years earlier, Maldonado had been charged with “contempt for authority” for attempting to stage a satirical performance with two pigs daubed with “Raul” and “Fidel.” He served 10 months in prison.

Despite the release of the 53 political prisoners in conjunction with the agreement to normalize relations with the US, dozens more remain in Cuban prisons, according to local human rights groups. The government denies access to its prisons by independent human rights groups, which believe that additional political prisoners, whose cases they cannot document, remain locked up.

Reforms to travel regulations that went into effect in January 2013 eliminated the need for an exit visa to leave the island. Exit visas had previously been used to deny the right to travel to people critical of the government—and to their families. Since then, many people who had previously been denied permission to travel have been able to do so, including human rights defenders and independent bloggers.

Nonetheless, the reforms gave the government broad discretionary powers to restrict the right to travel on the grounds of “defense and national security” or “other reasons of public interest.” Such measures have allowed authorities to deny exit to people who express dissent.

Prisons are overcrowded. Prisoners are forced to work 12-hour days and punished if they do not meet production quotas, according to former political prisoners. Inmates have no effective complaint mechanism to seek redress for abuses. Those who criticize the government or engage in hunger strikes and other forms of protest are often subjected to extended solitary confinement, beatings, restrictions on family visits, and denied medical care.

Despite updating its Labor Code in 2014, Cuba continues to violate conventions of the International Labour Organization that it has ratified, specifically regarding freedom of association, collective bargaining, protection of wages, and prohibitions on forced labor. While the formation of independent unions is technically allowed by law, in practice Cuba only permits one confederation of state-controlled unions, the Workers’ Central Union of Cuba.

In September, police raided Cubalex, a six-year-old organization that investigates human rights violations and provides free legal services to free-expression activists, migrants, and human-rights defenders. Officers confiscated files, strip-searched four men and a woman, and arrested two attorneys, one of whom was still in detention at time of writing.

In December 2014, President Obama announced that the United States would ease decades-old restrictions on travel and commerce, and normalize diplomatic relations with Cuba. In return, the Cuban government released 53 political prisoners and committed to allowing visits by international human rights monitors. The two governments restored diplomatic relations in July 2015, but at time of writing, no international human rights monitors had visited Cuba.

In January 2015, President Obama called on the US Congress to lift the economic embargo on the island that had been imposed more than four decades earlier. In October 2016, he used executive orders to end a few trade restrictions, including the longstanding $100 import limit on two of Cuba’s signature products: cigars and rum.

In September 2016, the European Union approved an agreement with Cuba that would strengthen economic and political ties and bring an end to the EU’s 1996 “Common Position on Cuba,” which conditions full European Union economic cooperation with Cuba on the country’s transition to a pluralist democracy and respect for human rights. In October, the UN General Assembly adopted a resolution—for the 25th consecutive year—calling on the US to end the embargo. Only the US and Israel did not vote in favor, but for the first time, they abstained instead of voting against.

As a member of the UN Human Rights Council from 2006 to 2012 and from 2014 to the present, Cuba has regularly voted to prevent scrutiny of serious human rights abuses around the world—opposing resolutions spotlighting abuses in North Korea, Syria, Iran, and Ukraine. However, Cuba supported a resolution adopted by the council in June 2016, establishing the post of an independent expert to combat violence and discrimination based on sexual orientation and gender identity.