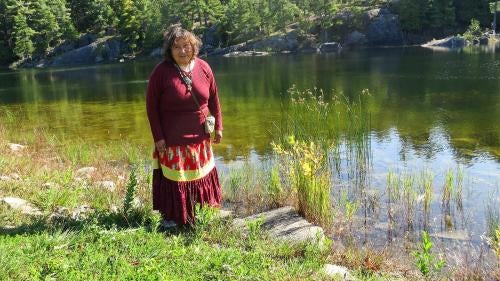 In October 2015, Canada’s Liberal Party, led by Justin Trudeau, won power in national elections and signaled a change in Canadian politics. However, the new government faces important human rights challenges, including violence against indigenous women and girls, the rights of indigenous peoples, the impact of Canada’s extractive and garment industries abroad, and children in detention.

In August 2016, the Canadian government launched a national public inquiry into the murders and disappearances of indigenous women and girls across Canada. With five commissioners and a budget of $53.86 million (US $41.13 million) over two years, the inquiry is tasked with examining the root causes and institutional responses to the high levels of violence. Although they represent just 4.3 percent of Canada’s female population, 16 percent of female homicide victims are indigenous.

The inquiry comes after a change in government and stern criticism from international human rights authorities. In 2015, the United Nations Committee on the Elimination of Discrimination against Women concluded that Canada had committed a “grave violation” of the rights of indigenous women by failing to promptly and thoroughly investigate the high levels of violence they suffer.

The extent to which the inquiry will scrutinize policing practices remains to be seen. Government ministers have assured the public that the broadly worded terms of reference will provide for a critical review of policing, even though it is not referenced explicitly. Advocates have long fought for an investigation into allegations that police forces have neglected the murders and disappearances, and that some officers have committed abuses against indigenous women and girls.

The government has yet to pay adequate attention to severe poverty, housing, water, sanitation, healthcare, and education problems in indigenous communities, particularly those in remote and rural areas. Inadequate access to clean, safe drinking water continues to pose a major public health concern in a number of indigenous communities.

As of July, there were 132 drinking water advisories—indicating unsafe water—in effect in 92 First Nations communities across Canada, excluding British Colombia. Contaminants found in the water have been linked to negative health consequences, from serious gastrointestinal disorders to increased risk of cancer.

The UN Committee on Economic, Social and Cultural Rights voiced concern in March about the inadequate access to safe drinking water and to sanitation faced by First Nations, as well as the lack of water regulations for First Nations people living on reserves.

A June Human Rights Watch report, Make It Safe, found that this restricted access impacts the health and hygiene of families on reserve. Caregivers shoulder extra burdens to ensure that children, elders, and others avoid exposure to unsafe water.

A 2016 report by the University of Toronto’s International Human Rights Program found that children in Canadian immigration detention are held in facilities that resemble medium-security prisons, where they receive inadequate access to education and have insufficient recreational opportunities. Primary medical care is available, but children receive no mental health support. Outside Ontario and Québec, children are held in even less suitable facilities, in some instances in correctional facilities for young offenders.

That figure does not include all children, including Canadian citizens, who are not themselves subject to formal detention orders but stay in detention with their parents in order to avoid separating from them. The exact number of these de facto detained children is not publicly known: Canada’s immigration agency considers them “guests” of the detention facilities.

They are not legally obligated to be in detention, but if their parents are held, the only alternative may be placement with a child protection agency. In 2014-15, such children spent, on average, three times as long in detention than children who are held under formal detention orders, the Canada Border Services Agency told University of Toronto researchers.

Canada’s federal government and the Canada Border Services Agency have shown willingness to reform the immigration detention system but had not announced concrete steps to do so at time of writing.

Human Rights Watch and other groups called on Canadian authorities to ensure that children and families with children are not detained solely because of their immigration status; develop strong policies and guidelines about how the various alternatives to detention should be used; and review their practices to ensure that they are reflecting the best interests of the child in all decisions that affect them.

Because Canada is the mining industry’s most important global hub, the collective human rights impact of Canadian mining firms is enormous. In past years, our research has uncovered widespread patterns of gang rape by employees of Barrick Gold in Papua New Guinea, and the apparent use of forced labor at Nevsun Resources’ Bisha mine in Eritrea. Many human rights problems linked to Canadian mining firms go underreported and unremedied because the government makes no proactive effort to monitor, let alone regulate, the human rights conduct of Canadian companies operating abroad.

Consistent with its predecessor, the Trudeau government has expressed the view to Human Rights Watch that no new oversight or regulation in this space is warranted, pointing in part to the existence of the government's Corporate Social Responsibility Counselor. This institution, however, cannot and indeed does not even purport to do what is most urgently needed—carry out any extraterritorial oversight or independent monitoring of Canadian firms.

In November 2016, the Canadian Network on Corporate Accountability proposed draft legislation that would create an ombudsman's office to hear and investigate human rights complaints against Canadian extractives firms operating in countries around the world.

In June 2016, Canada enacted legislation to allow people with “grievous and irremediable medical conditions” that cause enduring and intolerable suffering to seek assistance from a physician or nurse practitioner to end their lives, acting on a February 2015 Supreme Court ruling.

While the government has discussed a number of possible measures to address the significant gaps in the availability of hospice palliative care in the country it has yet to make a clear commitment to do so, or to take the urgent steps necessary to ensure that Canadians who will die of natural causes—likely the vast majority—can live the final stretches of their lives with dignity.

Canadian law puts limits on the export of military technology to countries with a record of human rights violations against their citizens. Canadian arms export law demands indication that “there is no reasonable risk” that the arms will be used against civilians. However, the Saudis have used such vehicles to violently suppress peaceful protests in eastern Saudi Arabia in 2011 and 2012.

In addition, since a Saudi Arabia-led coalition began its military campaign against Houthi forces in Yemen on March 26, 2015, at least 3,799 civilians have been killed and 6,711 wounded, according to the Office of the High Commissioner for Human Rights (OHCHR). In addition, Saudi Arabia is arming Yemeni forces led by a controversial military commander accused of using child soldiers, in the fight to retake the north from the Houthis and forces loyal to former President Ali Abdullah Saleh, including with vehicles.