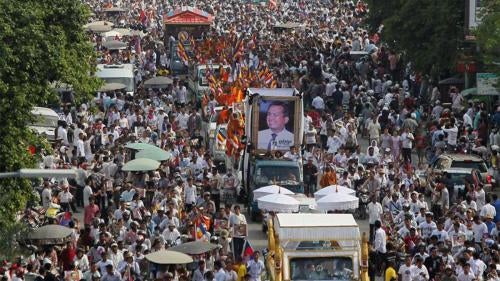 During 2016, Prime Minister Hun Sen and his ruling Cambodian People’s Party (CPP) significantly escalated persecution on political grounds, targeting Cambodia’s political opposition, human rights workers, social activists, and public intellectuals on the basis of their real or perceived political opposition to the government and its leader. These abuses appeared aimed to prevent victory or create conditions for overturning victory by the opposition Cambodia National Rescue Party (CNRP) in local and national elections scheduled for 2017 and 2018 respectively. The government also filed baseless charges against Rong Chhun, a member of the National Election Committee (NEC) appointed as a neutral member of the NEC as part of a political deal with the opposition.

On July 10, popular political commentator Kem Ley, who had voiced many criticisms of the government, was shot to death in Phnom Penh in broad daylight. Members of the public chased the gunman, who police took into custody. Authorities soon announced he had confessed to the crime. Media reports identified him as a former soldier from outside the capital. No genuine effort was made to identify those who ordered the killing.

Authorities systematically denied Cambodians their right to peaceful assembly by suppressing protests and issuing a series of ad hoc bans on non-violent gatherings and processions. Senior military officials backed this up with a flurry of pronouncements, including threats to deploy armed forces to prevent or suppress demonstrations by taking “absolute” action against them. These followed a memorial march on July 24, 2016, in memory of Kem Ley. Tens of thousands of people attended, despite government efforts to restrict participation.

Corruption remains a huge problem. Rather than targeting high-level official corruption, Cambodia’s official anti-corruption unit has launched politically motivated investigations against the CNRP and the Cambodian Human Rights and Development Association (ADHOC), one of the country’s oldest and most respected nongovernmental organizations (NGOs).

Attacks on the Political Opposition

CNRP president Sam Rainsy remained outside Cambodia in 2016, having decided not to return to the country in 2015 after the government announced it was going to enforce a two-year prison sentence against him on trumped-up charges. During 2016 four new prosecutions were brought against Rainsy, including one for being an accomplice to CNRP Senator Hong Sok Hour, convicted on politically motivated charges in August 2015 despite having parliamentary immunity and in violation of his right to freedom of opinion and expression. Two assistants to Rainsy fled abroad to avoid arrest on charges that carried up to 17 years in prison. The three other cases against Rainsy were for alleged criminal defamation of Hun Sen, CPP honorary chairperson Heng Sarmin, and a minister of state attached to Hun Sen.

On September 9, a Phnom Penh court convicted CNRP acting leader Kem Sokha of disregarding a court summons to appear as a witness against two fellow CNRP National Assembly members in another trumped-up case. In pursuing the case against Sokha, the courts violated his parliamentary immunity and sentenced him to five months in prison. Following a failed government attempt to arrest him in May, he moved to CNRP headquarters where he remained at time of writing, protected by party supporters but enduring a form of de facto house arrest.

On June 13, a Phnom Penh Court convicted without basis three CNRP activists for “insurrection.” Arrested in August 2015, they joined 11 other CNRP activists found guilty on the same trumped-up charge in July 2015, in serving long prison terms for their involvement in a 2014 demonstration in Phnom Penh during which security forces attacked protesters.

CNRP parliamentarian Um Sam-an was arrested on April 11 for criticizing the government’s handling of border disputes with Vietnam. He was falsely charged with incitement and discrimination and faces up to five years’ imprisonment.

Government promises to end decades-old land-grabbing practices had no overall positive effect. According to statistics compiled by NGOs working on the subject statistics, land disputes in 2016 continued at the same level as in 2014-2015, affecting approximately 10,000 families per year.

The government targeted veteran land activists for prosecution. On August 15, Phnom Penh authorities ordered the arrest of two for holding a peaceful protest vigil. In a summary trial seven days later, they were sentenced to six days’ imprisonment for “insulting” government officials. On August 19, two long-dormant politically motivated prosecutions against one of the two, Tep Vanny, were suddenly revived. She was kept in detention after the other activist was released. At least three other land activists were charged in these two revived cases, both related to land rights protests. On September 19, Tep Vanny and three others were convicted and sentenced to six months in prison in one of the cases, despite no evidence connecting them to any recognizable criminal offense.

While labor unions succeeded in gaining government agreement for an increase in the minimum wage for garment workers, labor activists were under siege. In addition to NEC member and labor activist Rong Chhun, whose case is mentioned above, at least 12 other prominent trade union figures faced prosecution on baseless or frivolous charges. Although none of the 13 were in detention, all faced the prospect of jail. Trade union activists believed the prosecutions were in significant part intended to intimidate the movement’s leadership during negotiations with the government that began in September 2016 over the minimum wage for garment workers.

Election-monitoring experts were concerned that prosecution of Rong Chhun aimed at pressuring him to refrain from pressing for free and fair elections. They also pointed out that convicting him would remove him from the NEC and allow the CPP to shift the balance of power there decisively in its favor.

On April 28, 2016, the government’s Anti-Corruption Unit (ACU) took into custody four senior staff of the Cambodian Human Rights and Development Association (ADHOC) and one former staffer, Ny Chariya, a deputy secretary-general of the NEC. They were accused of “bribing a witness” in connection with legal advice and other assistance ADHOC had been providing to a witness in the case against Kem Sokha. All five remained in detention on charges punishable by up to 10 years in prison. Authorities warned that further arrests of ADHOC staff could follow. On September 22, Ny Chariya was sentenced to six months in prison upon conviction in another case for having raised crtical questions about the conduct of a provincial court dealing with a land dispute.

The CPP sued political commentator Ou Virak in April in a defamation lawsuit for raising questions about the CPP’s legal actions in the Kem Sokha case. Although defamation itself does not carry a custodial sentence, the damages requested were exorbitant and failure to pay could result in imprisonment.

On July 22, 2016, the Appeals Court upheld the conviction earlier in the year of student Kong Raya for advocating a “color revolution” in Cambodia, maintaining his one-and-a-half-year prison sentence.

The May 2016 trial of three officers of Hun Sen’s personal Bodyguard Headquarters for a brutal October 2015 assault against two opposition National Assembly members resulted in partly suspended prison sentences. Two of the attackers will each serve just one year. The cases appeared to be brought to pin the blame on lower-ranking individuals and avoid following up on evidence that higher-ups were involved in the crime, which had all the hallmarks of being government-orchestrated.

Similarly, according to sources with direct knowledge of the investigation into the killing of Kem Ley, the charging and detention of the alleged shooter was accompanied by an attempt by officials to falsely implicate the CNRP national leadership as having orchestrated the assassination while avoiding following up on leads that might produce evidence of CPP involvement.

Despite promises by Hun Sen to reform or close the Prey Speu detention center for Phnom Penh’s “undesirable people,” it remained operational. Security forces arbitrarily arrested hundreds of alleged homeless people, people who use drugs, sex workers, street children, and persons assumed to have a mental disability, and sent them to Prey Speu or one of the seven other so-called drug treatment centers around the country, where they are held for indefinite periods without a judicial process. At least two detainees died in Prey Speu under suspicious circumstances. The centers, many of them operated by security forces, often subject detainees to torture and other forms of ill-treatment.

China, Vietnam, and South Korea were key investors in 2016. China, Japan, and the European Union were the leading providers of development-related assistance.

In a joint statement first made before the UN Human Rights Council on September 14, 39 countries declared they were deeply concerned about escalating threats to “legitimate activities by opposition parties and human rights NGOs” in Cambodia and called on the government to ensure future free and fair elections and thus “the legitimacy of the next government.” The European Parliament issued a strong resolution condemning abuses and repression. Nevertheless, foreign governments took no concrete steps to address Cambodia’s deteriorating human rights situation.