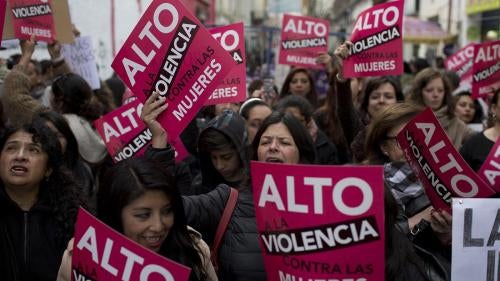 Impunity for violent crime and human rights violations remains a serious problem in Bolivia. The administration of President Evo Morales has created a hostile environment for human rights defenders that undermines their ability to work independently.

Despite recent legal reforms, extensive and arbitrary use of pretrial detention—combined with trial delays—undermine defendants’ rights and contribute to prison overcrowding. Threats to judicial independence, violence against women, and child labor are other major concerns.

In February, voters rejected a national referendum that would have reformed the constitution to allow President Morales—who has served as president since 2005—to run for a fourth term in 2019.

Bolivia has prosecuted only a few of the officials responsible for human rights violations committed under authoritarian governments from 1964 through 1982, in part because the armed forces have at times refused to provide information to judicial authorities on the fate of people killed or forcibly disappeared. Despite repeated commitments to do so, the Bolivian government has yet to create a truth commission to carry out independent investigations of abuses during that period.

Those responsible for the 2008 killing of at least 19 people during protest-related clashes between supporters and opponents of President Morales have largely gone unpunished. As of September, a La Paz court had yet to rule in a case against Leopoldo Fernández, former prefect of Pando Department, and three other local officials, for their alleged roles in the deaths of 13 people.

Authorities have also failed fully to investigate alleged 2011 police abuses against protesters opposing a proposed highway in the Isiboro Secure National Park and Indigenous Territory (known as “TIPNIS”) and the 2009 police killing of two Hungarians (one of Bolivian birth) and an Irishman whom the government alleged were mercenaries involved in a separatist plot.

Impunity has led to mob attacks, or lynchings, of alleged criminals. Five people died in lynchings in 2015, according to the Ombudsman’s Office. In March 2016, media reported that a mob in El Alto killed a man with mental disabilities whom they suspected to be a criminal and burned parts of his body. Many lynchings go unpunished.

Human rights violations against soldiers remain a problem. In January, the Ombudsman’s Office reported that a soldier had been killed in a military headquarters that month and that another had died in December 2015 after being subject to an “inhumane” military exercise. Most such deaths of soldiers go unpunished, according to the Ombudsman’s Office.

The Constitutional Court ruled in 2012 that a civilian court should have jurisdiction of the case of a conscript who died in 2011 following a combat training exercise during which instructors allegedly beat him on the head and chest. The high court urged lawmakers to reform Bolivia’s military justice code to ensure that cases of military human rights violations are heard in civilian courts. At time of writing the code had not been reformed.

The Bolivian justice system has been plagued by corruption, delays, and political interference for years.

In June, members of the three branches of government, as well as civil society groups and other stakeholders, discussed proposals to reform the Bolivian justice system during a “National Justice Summit.” The summit’s recommendations included requiring that the Plurinational Assembly reform the selection process for high-court judges, creating a new body to supervise judges, and assessing the work of current judges and prosecutors. The scope of the proposed reforms and thus their impact on judicial independence remained unclear at time of writing.

As of June, 69 percent of inmates in Bolivian prisons had not been convicted of a crime. Extended pretrial detention and trial delays have led to prison overcrowding and poor conditions. As of March, 13,940 inmates packed prisons built to hold a maximum of around 5,000.

A 2014 law decreased the maximum periods of pretrial detention in most cases. Presidential decrees adopted between 2012 and 2015 allowed the president to reduce the sentences of those convicted of minor crimes and pardon those held in pretrial detention for minor crimes. As of January 2016, more than 4,500 people had benefited from these decrees, according to official figures.

In June, the National Justice Summit recommended that pretrial detention be used “exceptionally” and that legal reforms should broaden alternatives to pre-trial imprisonment. At time of writing, no legislation had been introduced to implement those recommendations.

In May, lawyer Eduardo León was detained and prosecuted for “human trafficking” after he represented Gabriela Zapata Montaño, a former lover of President Morales who claimed she had a son with him. Bolivian authorities said that Zapata and León had paid a boy to say he was Morales’ son. According to the Ombudsman’s Office, judges violated León’s due process rights, detaining him without charge beyond the maximum period allowed by Bolivian law. Later that month, government authorities summarily withdrew Leon’s license to practice law, alleging he had falsified his military service certificate in 1999 (presenting such a certificate was required to get a university degree at the time).

In October, the Attorney General’s Office used a 2010 law to charge businessman and opposition leader Samuel Doria Medina with “anti-economic conduct” for mismanagement he allegedly committed in 1992 when he was minister of planning. International human rights law prohibits such retroactive application of the criminal law, unless doing so is beneficial to the defendant.

In May 2016, several protesters and policemen were wounded in La Paz during clashes at a demonstration by people with disabilities demanding a raise in their disability allowances. In August, the UN Committee on the Rights of Persons with Disabilities urged the Bolivian government to investigate allegations by civil society groups that police used excessive force during the protest.

In 2013, President Morales signed a law and adopted a decree granting the government broad powers to dissolve civil society organizations. Under the decree, any government office may request that the Ministry of Autonomy revoke the permit of a nongovernmental organization (NGO) if it performs activities other than those listed in its bylaws, or if the organization’s legal representative is criminally sanctioned for carrying out activities that “undermine security or public order.”

The decree also allows the Plurinational Assembly to request the revocation of an NGO permit in cases of “necessity or public interest.” These measures give the government inappropriately wide latitude to interfere with the operation of independent civil society groups. In December 2015, the Bolivian Constitutional Court ruled the law and decree constitutional.

In March 2016, President Morales said that “some NGOs” were “conspiring” against his government but did not specify which ones. In September, the minister of the Presidency said that “some NGOs” sought to carry out a coup and “subdue the Bolivian People,” but he neither named the NGOs nor presented evidence to support his claim.

While public debate is robust, the Morales administration periodically lashes out against journalists, accusing them, often without presenting evidence, of publishing what it calls lies and politically motivated distortions. The government has repeatedly accused media outlets of participating in an international conspiracy against Bolivia and President Morales.

Bolivia lacks transparent criteria for using government funds to purchase media advertisements—an important source of media revenue—and some media outlets have accused the government of discriminating against those who criticize government officials by withholding advertising from them.

When the OAS special rapporteur for freedom of expression told the Bolivian media in August that under international law governments should not discriminate against media companies viewed as critical when purchasing media advertisements, President Morales accused him of being part of a “cartel of liars.”

Indigenous peoples’ right to free, prior, and informed consent (FPIC) regarding legislative or administrative measures that may affect them is not fully embodied in Bolivian legislation. A current mining law limits FPIC to the exploitation phase of land concessions, but international standards call for FPIC through all stages of projects that impact on indigenous peoples’ rights over land and natural resources.

Women and girls in Bolivia remain at high risk of gender-based violence, despite a 2013 law that sets forth comprehensive measures to prevent and prosecute violence against women. The law created the crime of “femicide” (the killing of a woman in certain contexts, including of domestic violence) and called for the establishment of shelters for women, as well as special prosecutors and courts for gender-based crimes.

In July, the Attorney General’s Office reported that that 147 “femicides” had occurred in Bolivia from January 2015 through June 2016, and that prosecutors had obtained convictions in four of these cases.

Under Bolivian law, abortion is not a crime when the pregnancy is the result of rape or if the procedure is necessary to protect the life or health of a pregnant women. In 2014, the Constitutional Court ruled that prior judicial authorization and prosecution of the alleged rapist were not prerequisites for post-rape abortion. In November 2015, the health ministry issued a resolution stipulating that abortion should be permitted when the mental health of the mother—not just her physical health—is at risk.

In 2014, the Plurinational Assembly adopted legislation allowing children as young as 10 to work, in contravention of international standards and making Bolivia the first country in the world to legalize employment at such a young age. In February 2015, the Ombudsman’s Office said that 850,000 children were working in Bolivia, most of them younger than 14.

In May 2016, the Plurinational Assembly passed a bill that allows people to revise the gender noted on their identification documents without prior judicial approval.

Same-sex couples in Bolivia are not allowed to marry or engage in civil unions. The 2009 constitution defines marriage as the union of a man and a woman.

In September, the Inter-American Commission on Human Rights urged Bolivia to carry out an independent and impartial investigation into the killing of 5 people, including the then-vice minister of interior, during a protest by miners in the municipality of Panduro.

In August, the UN Committee on the Rights of Persons with Disabilities urged Bolivia to abolish legislation that limits the legal capacity of people with disabilities to form a family, vote, and enter into contracts, among other things. The committee also recommended that Bolivia end the practice of sterilization without consent and take measures to deinstitutionalize children with disabilities.