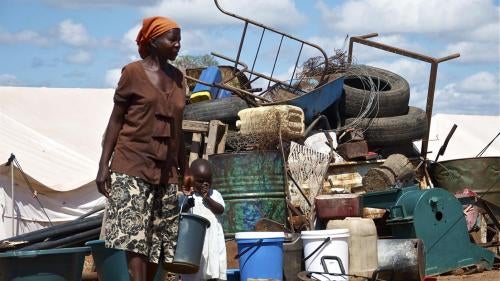 Zimbabwean President Robert Mugabe consolidated his grip on power and failed to introduce any meaningful human rights reforms in 2015. In December 2014, Mugabe fired reformist Vice President Joyce Mujuru, apparently because he considered her disloyal, and replaced her with two co-vice presidents, Emmerson Mnangagwa and Phelekezela Mphoko. Both are implicated in serious past human rights abuses.

Mugabe secured the endorsement of the ruling ZANU-PF party to be the 2018 presidential candidate (when he will be 94), appointed his wife to head the party’s women’s wing, and amended the party constitution to allow him to make all senior party appointments.

The government faced severe socioeconomic challenges and did not invest in desperately needed public services such as water, education, health, and sanitation. About 82 percent of the national budget was allocated to civil service salaries, much of which appears to have disappeared through corruption. The International Monetary Fund (IMF) estimated that Zimbabwe’s external debt obligations were over 80 percent of the country’s gross domestic product.

Those who criticized Mugabe or his government, including human rights defenders, civil society activists, political opponents, and outspoken street vendors, were harassed, threathened, or arbitrarily arrested by police and state security agents. The authorities disparaged lesbian, gay, bisexual, and transgender (LGBT) people. There was no progress toward justice for past human rights violations and political violence.

Itai Dzamara, a pro-democracy activist and human rights defender, was forcibly disappeared on March 9, 2015. Dzamara, the leader of Occupy Africa Unity Square—a small protest group modelled after the Arab Spring uprisings—had led a number of peaceful protests concerning the deteriorating political and economic environment in Zimbabwe in 2014 and 2015. He had petitioned Mugabe to resign and for reforms to the electoral system. Police ZANU-PF supporters assaulted him on several occasions, including during a peaceful protest in November 2014, when about 20 uniformed police handcuffed and hit him with batons until he lost consciousness. When Kennedy Masiye, his lawyer, tried to intervene, the police beat him up, breaking his arm.

On April 25, activists organized a car procession to raise awareness about Dzamara’s case. Police arrested 11 activists and detained them for six hours, then released them without charge.

On January 27, 2015, five community leaders representing 20,000 Tokwe-Mukorsi dam flood victims (see below) were sentenced to five years in prison for public violence after they organized a demonstration to protest the government’s failure to compensate them for the loss of their land and the dire conditions in which they lived. Authorities had arrested the community leaders in August 2014, including Mike Mudyanembwa, the chair of the victims’ Chingwizi Camp Committee, who did not participate in the demonstration. Their lawyers alleged that they were tortured in prison.

Police and state security agents targeted perceived govenrment opponents and critics. They threatened, kept under surveillance, and arbitrarily arrested supporters of former Vice President Joyce Mujuru after she was removed from her post and considered forming an opposition party.

In November 2014, police arrested and detained former leader of the war veterans and key Mujuru supporter, Jabulani Sibanda, on charges of undermining Mugabe’s authority. Sibanda was released on bail after five days in detention. He said he received death threats from state security agents after he was released from detention. In February, April, and June 2015, police arrested and briefly detained Temba Mliswa, another expelled senior ZANU-PF official, on spurious charges.

On July 14, police beat and arrested 16 street vendors, including Sten Zvorwadza, Samuel Wadzanai Mangoma, and Lucy Makunde, leaders of the National Vendors Union of Zimbabwe (NAVUZ), and brought trumped-up charges of inciting public violence against them. The arrests were part of a violent crackdown on unlicensed street vendors—mostly women living in extreme poverty—in the capital, Harare, during a government “clean-up” campaign. The crackdown was marked by beatings, destruction of goods, and arbitrary arrests.

The government ignored the plight of the 20,000 people who fled their homes because of massive flooding at Zimbabwe’s Tokwe-Mukorsi dam in February 2014. It coerced the flood victims to resettle onto one-hectare plots at a farm with close links to the ZANU-PF party, without paying them fair compensation. The flood victims lacked adequate shelter, safe drinking water, and access to sanitation and health services.

According to the governmental Zimbabwe Human Rights Commission (ZHRC), the flooding “was not natural, but [a] man-made disaster” and could have been avoided. It urged the government to protect the basic rights of all the flood victims. In July 2015, the flood victims sent a desperate plea to Mugabe to provide them with basic services, adequate compensation for the loss of their land, and full consultations about their future resettlement. He did not respond.

The government lacked comprehensive strategies to curb the rising practice of child marriage. The United Nations Children’s Fund (UNICEF) said nearly one-third of girls in Zimbabwe marry before their 18th birthday and 4 percent marry before they turn 15. In June, the prosecutor general said girls as young as 12 can marry if they give their consent, undermining efforts to curb the harmful practice. He later denied making the statement. Two former child brides launched a legal appeal at the Constitutional Court of Zimbabwe in January to declare child marriage illegal and unconstitutional. The court was still considering the case at time of writing.

There was no progress on establishing the constitutionally mandated National Peace and Reconciliation Commission (NPRC) for post-conflict justice, healing, and reconciliation. To date, no independent mechanism has addressed serious past human rights crimes, including widespread election-related violence and the massacre of an estimated 20,000 people in the Matebeleland and Midlands provinces in the 1980s.

Police did not conduct serious investigations or arrest any suspects in the December 2014 attack at a Christmas party organized by the activist group Gays and Lesbians of Zimbabwe (GALZ), during which 12 armed men invaded the private party and seriously injured 35 people with chains, sjamboks, and long sticks.

In February, the European Union announced it would resume development aid to Zimbabwe after 12 years of sanctions with an aid package of €237 million (US$252.37 million) over five years. EU officials said they would closely monitor the funds to ensure they were not misused.

In April, the European Parliament issued a resolution strongly condemning Itai Dzamara’s forced disappearance and calling for his immediate and unconditional release. The EU urged Zimbabwean authorities to take all necessary measures to find Dzamara and bring those responsible to justice. In July, the United States issued statements registering deep concern over the government’s failure to properly investigate his forced disappearance.

In August, Mugabe concluded his one-year tenure as chairperson of the Southern African Development Community (SADC); his tenure as president of the African Union will end in January 2016. Neither institution criticized or engaged with his government on human rights violations.