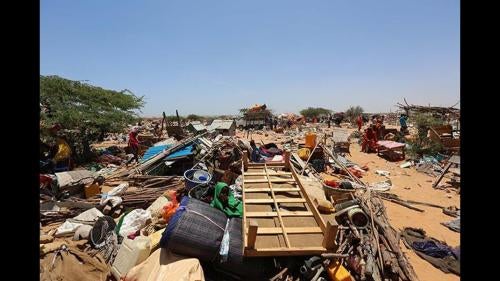 Ongoing political infighting and three government reshuffles in three years, along with political maneuvering around implementation of federalism, detracted from justice and security sector reform progress. Tensions over creation of a new interim regional administration in central Somalia led to open conflict between clan militias and government forces, resulting in abuses against civilians.

The forces of the African Union Mission to Somalia (AMISOM), as well as Ethiopian armed forces, launched a new offensive against the armed Islamist group Al-Shabaab in southern Somalia. While Al-Shabaab lost control of some key towns, it maintains control over large swathes of territory, and many key transport routes. Al-Shabaab carried out targeted attacks on civilians and civilian infrastructure, in the capital, Mogadishu, and other towns under government or allied authority, and increased high-profile attacks on AMISOM facilities. There were credible reports that AMISOM forces killed civilians during operations and in response to Al-Shabaab attacks.

Civilians have been killed at government-manned checkpoints and in the crossfire of fighting between government forces and Al-Shabaab, clashes over the creation of federal states, and in indiscriminate responses to attacks.

The security situation remained volatile in government-controlled towns. Government forces failed to protect civilians, including journalists, clan elders, clerics and lawmakers and other officials from targeted killings by Al-Shabab as well as by unknown gunmen, primarily in Mogadishu, Baidoa, the capital of the Bay region, and Beletweyn, the capital of Hiraan.

In February, as a result of ongoing tensions regarding establishing an interim regional administration in central Somalia, fighting in Guri’el between government forces and the Ahlu Sunna Wal Jama’a, a Sufi militia, resulted in civilian deaths and massive displacement. According to the United Nations, about 90 percent of the estimated population of over 65,000 temporarily fled. Inter-clan fighting, reportedly involving government forces, in Hiraan also resulted in civilians deaths.

Somalia’s national intelligence agency, NISA, continued to conduct mass security sweeps despite having no legal mandate to arrest or detain. NISA has occasionally held detainees for prolonged periods without judicial review and beat suspects during interrogations.

The military court continued to try cases that are not legally within its jurisdiction and in proceedings falling short of international fair trial standards. Eleven individuals were sentenced to death by military courts and executed in south-central Somalia and Puntland.

Children continued to be killed, arbitrary detained, and recruited into the armed forces. In January 2015, Somalia ratified the Convention on the Rights of the Child and in November endorsed the Safe Schools Declaration commiting to take concrete steps to protect students and educational institutions.

Al-Shabaab regularly targets civilians and civilian structures, particularly in Mogadishu, resulting in numerous casualties. On November 1, Al-Shabaab attacked the popular Sahafi Hotel in Mogadishu, killing at least 15 people, including a journalist covering the attack, other civilians and officials. On December 5, 2014, Al-Shabaab claimed responsibility for a twin attack in Baidoa that killed at least 19 people including three journalists.

Reports increased of indiscriminate killings of civilians by AMISOM and other foreign forces, particularly at checkpoints, following attacks on AMISOM convoys and in airstrikes.

On August 8, Ethiopian forces under AMISOM killed five civilians and injured six others at a checkpoint in Halgan, Hiraan. In late May, clashes on the Ethiopian side of the Galgadud border, between the special police of Ethiopia’s Somali region, known as “Liyu police,” and local pastoralists, resulted in significant displacement and civilian casualties, including women and children.

In 2014, the government endorsed an action plan to address alarming levels of sexual violence. However, as in other prioritized reform areas, implementation has been slow and protection of the most vulnerable communities non-existent. While the full scope of sexual violence remains unknown, internally displaced women and girls are clearly particularly vulnerable to rape by armed men, including government soldiers and militia members.

Some soldiers from Uganda and Burundi deployed with AMISOM sexually exploited and assaulted women and girls on their bases in Mogadishu. In some cases women and girls were offered humanitarian assistance, medicine and food in exchange for sex. Few women filed complaints due to fear of reprisals and absence of effective and safe complaint mechanisms. The African Union, and Burundian, and Ugandan authorities investigated specific allegations, although no prosecutions had occurred at time of writing.

Targeted attacks on humanitarian organizations persisted. Al-Shabaab claimed responsibility for an April 20 attack in which a suicide bomber killed four United Nations Children’s Fund (UNICEF) staff and two security guards in Garowe, Puntland. On November 15, a contractor for the UN mine action was killed by armed men in Beletweyn.

Military operations conducted by AMISOM, Kenyan, and Ethiopian forces, and Somali forces against Al-Shabaab, as well as clan-fighting, resulted in significant civilian displacement. More than 350,00 people, including women, children and people with disabilities, who fled to Mogadishu during the 2011 famine remained in dire conditions in the capital and are subjected to forced evictions, sexual violence and clan-based discrimination by government forces, allied militia, and private individuals.

In December 2014, the government passed a displacement policy largely in line with international law, yet large-scale forced evictions, including by government forces, occured in Mogadishu, Kismayo, and Baidoa. During the first two months of 2015, over 40,000 people were forcibly evicted in Mogadishu. Government forces forcibly evicted over 21,000 people during one operation in March, beat some evictees, destroyed shelters, and left them without water, food, or other assistance.

Despite the federal government’s commitments to holding those responsible for the killings of journalists to account, impunity prevails.

On April 13, the government executed six men convicted of murder, the first death sentences to be carried out in Somaliland since 2006.

Somaliland authorities have also failed to sufficiently control and regulate private mental health centers that have confined patients involuntarily and subjected them to chaining, and, on occasion, beatings.

Foreign and regional partners continued to provide financial and other assistance to AMISOM, including to mentor and train Somali armed forces engaged in security and military operations against Al-Shabaab. On July 28, the UN Security Council renewed AMISOM’s mandate until May 2016, in a resolution that did not underscore the importance of accountability for abuses by AMISOM forces.

Much of the international community—and regional community—has focused on federalism efforts, seen as a prerequisite to political transition in 2016.

In addition to their large military presence in Somalia, Kenya and Ethiopia trained and provided military support to government-affiliated militia. Both focused on the status of border areas, and Ethiopia in particular participated in negotiations over the creation of bordering federal states.

The US has claimed responsibility for three drone strikes since December 29, 2014, against individuals allegedly involved in the September 2013 Westgate mall attack in Kenya, a marked increase in drone usage in Somalia. While the US Defense Department has openly acknowledged involvement, it has consistently failed to make public concrete information regarding civilian casualties.