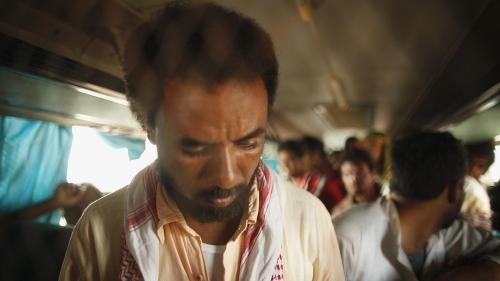 Through 2015 Saudi authorities continued arbitrary arrests, trials, and convictions of peaceful dissidents. Dozens of human rights defenders and activists continued to serve long prison sentences for criticizing authorities or advocating political and rights reforms. Authorities continued to discriminate against women and religious minorities. On March 26, a Saudi Arabia-led coalition began an airstrike campaign against Houthi forces in Yemen that included use of banned cluster munitions and unlawful strikes that killed civilians.

Saudi Arabia continued to repress pro-reform activists and peaceful dissidents. In 2015, over a dozen prominent activists convicted on charges arising from their peaceful activities were serving prison sentences.

Prominent activist Waleed Abu al-Khair continued to serve a 15-year sentence imposed by Saudi Arabia’s terrorism court that convicted him in 2014 on charges stemming solely from his peaceful criticism in media interviews and on social media of human rights abuses. Authorities imposed a foreign travel ban on Samar Badawi, Abu al-Khair’s wife, in December 2014; earlier, she had travelled to Geneva to inform the United Nations Human Rights Council of her husband’s case.

By September, Saudi Arabia had jailed nearly all the founders of the banned-Saudi Civil and Political Rights Association (ACPRA), and two others—Abdulaziz al-Shubaily and Issa al-Hamid—were on trial for their peaceful pro-reform activities.

Saudi authorities arrested prominent writer and commentator Zuhair Kutbi on July 15 after he discussed peaceful reform proposals in a TV interview, and later referred him to the Specialized Criminal Court for trial.

Authorities persisted in refusing to legally register political or human rights groups, exposing their members to prosecution for “setting up an unregistered organization.” In December 2015, the Saudi cabinet approved a new law permitting the establishment of civil society organizations for the first time, but authorities had not published the text of the law at time of writing.

Saudi Arabia does not tolerate public worship by adherents of religions other than Islam and systematically discriminates against Muslim religious minorities, notably Twelver Shia and Ismailis, including in public education, the justice system, religious freedom, and employment. Government-affiliated religious authorities continued to disparage Shia Islam in public statements and documents.

Militants affiliated with the extremist armed group Islamic State (also known as ISIS) carried out five major attacks targeting Saudi Shia from November 2014, including bombings at Shia mosques in Qatif and Dammam that killed 26 people and injured over 100.

Saudi Arabia has no written laws concerning sexual orientation or gender identity, but judges use principles of uncodified Islamic law to sanction people suspected of committing homosexual or other “immoral” acts. If such activity occurs online, judges and prosecutors utilize vague provisions of the country’s anti-cyber crime law that criminalize online activity that impinges on “public order, religious values, public morals, and privacy.”

In 2015, for example, an appeals court upheld a sentence of three years in prison and 100,000 Saudi Riyals (US$70,800) against a Saudi man for using social media “in order to practice homosexuality.” The ruling relied in part on the anti-cyber crime law.

Judges can order arrest and detention, including of children, at their discretion. Children can be tried for capital crimes and sentenced as adults if there are physical signs of puberty.

Saudi Arabia applies Sharia (Islamic law) as its national law. There is no formal penal code, but the government has passed some laws and regulations that subject certain broadly-defined offenses to criminal penalties. In the absence of a written penal code or narrowly-worded regulations, however, judges and prosecutors can criminalize a wide range of offenses under broad, catch-all charges such as “breaking allegiance with the ruler” or “trying to distort the reputation of the kingdom.”

Authorities do not always inform suspects of the crime with which they are charged, or allow them access to supporting evidence, sometimes even after trial sessions have begun. Authorities generally do not allow lawyers to assist suspects during interrogation and sometimes impede them from examining witnesses and presenting evidence at trial.

In 2015, authorities continued to detain arrested suspects for months, even years, without judicial review or prosecution.

Authorities announced three mass round-ups of Saudi and foreign terrorism suspects in 2015, including 93 persons in April, 431 in July, and 74 in August in response to ISIS-related plots and attacks across the kingdom against security forces and, in some cases, mosques, killing civilians.

Saudi Arabia dramatically increased the execution rate in 2015. According to Interior Ministry statements, Saudi Arabia executed 152 persons between January and November, mostly for murder and drug offenses. Sixty-two of those executed were convicted for non-violent drug crimes. Most executions are carried out by beheading, sometimes in public.

In late January authorities said they would prosecute a security official who filmed the January beheading of a Burmese woman in Mecca in which the swordsman required three sword strikes to sever the victim’s head. In September, Saudi Arabia’s Supreme Court upheld a death sentence against Ali al-Nimr, a Saudi man convicted for crimes related to a 2011 protest movement, allegedly committed before he was 18.

Saudi Arabia’s discriminatory male guardianship system remains intact despite government pledges to abolish it. Under this system, ministerial policies and practices forbid women from obtaining a passport, marrying, travelling, or accessing higher education without the approval of a male guardian, usually a husband, father, brother, or son. Authorities also fail to prevent some employers from requiring male guardians to approve the hiring of adult female relatives or some hospitals requiring male guardian approval before undertaking certain medical procedures for women.

Under uncodified rules on personal status, women are not allowed to marry without the permission of their guardian; unlike men, they do not have a unilateral right to divorce and often face discrimination in relation to child custody.

All women remain banned from driving vehicles in Saudi Arabia. In December 2014, authorities arrested two Saudi women who drove a car to the United Arab Emirates-Saudi Arabia border and detained them for 73 days before releasing them without charge.

In a positive move in August, authorities began allowing Saudi women for the first time to both register to vote and to run for office in municipal elections due in December.

Over 9 million migrant workers fill manual, clerical, and service jobs, constituting more than half the workforce. Many suffer abuses and exploitation, sometimes amounting to conditions of forced labor.

The kafala (sponsorship) system ties migrant workers’ residency permits to “sponsoring” employers, whose written consent is required for workers to change employers or exit the country under normal circumstances. Some employers illegally confiscate passports, withhold wages, and force migrants to work against their will.

In October, labor officials issued directives introducing or raising fines for employers who violate labor regulations. These include prohibitions on confiscating migrant workers’ passports, failing to pay salaries on time, and failing to provide copies of contracts to employees.

Faced with a domestic unemployment rate of 12 percent that may rise as the domestic population increases, Saudi authorities have introduced labor reforms since 2011 that create a tiered quota system for the employment of Saudi citizens in the private labor sector that differs according to the nature of the business. As part of these reforms, Saudi labor authorities in 2015 allowed foreigners working in firms that do not employ the required percentage of Saudis to change jobs without employer approval.

Police and labor authorities continued to arrest and deport foreign workers found in violation of existing labor laws, targeting workers without valid residency or work permits, or those found working for an employer other than their legal sponsor.

On March 23, Saudi authorities announced that they had deported 300,000 people over the previous five months, an average of nearly 2,000 a day. Saudi Arabia is not a party to the 1951 Refugee Convention and not established an asylum system whereby migrants can apply to prevent their forced return to places where their lives or freedom may be threatened.

Domestic workers, predominantly women, faced a range of abuses including overwork, forced confinement, non-payment of wages, food deprivation, and psychological, physical, and sexual abuse without the authorities holding their employers to account. Workers who attempted to report employer abuses sometimes faced prosecution based on counterclaims of theft, “black magic,” or “sorcery”.

On March 26, a Saudi Arabia-led coalition of states began a campaign of airstrikes against Houthi forces in Yemen and instituted a naval and aerial blockade. The airstrikes struck Houthi targets in the capital, Sanaa, and other cities, but also killed and injured many civilians. Between March and July nearly 2,112 civilians were killed in Yemen as a result of the armed conflict, most from coalition airstrikes. 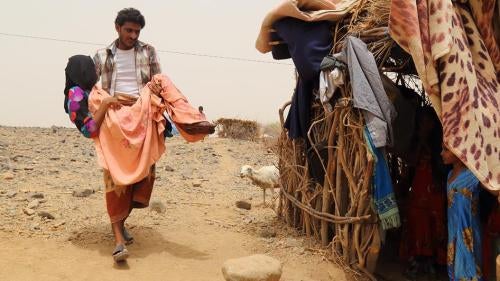 Human Rights Watch investigated a number of Saudi-led airstrikes that appeared to be unlawful, including the bombing of a dairy factory in the port of Hodaida on March 31 that killed at least 31 civilians, attacks on civilian objects in the northern Houthi stronghold of Saada that killed dozens in April and May, and the bombing of two residential compounds in the Yemeni port city of Mokha that killed at least 65 civilians in July.

The coalition has used cluster munitions, banned by 117 states, in civilian-populated areas in Yemen, wounding and killing civilians.

The coalition-imposed blockade also had a severe impact on Yemen’s civilians. According to the United Nations, by September half the population faced food insecurity and 21 million Yemenis—a staggering 80 percent of the population—needed humanitarian assistance. More than 15.2 million people lacked access to basic health care, and over 20 million lacked access to safe water. With commercial imports accounting for 90 percent of Yemen’s food and fuel supplies, the coalition-imposed blockade may amount to starvation of civilians as a method of warfare, a war crime.

The United States largely did not criticize Saudi human rights violations beyond Congressionally-mandated annual reports, but in January 2015 the State Department called on Saudi Arabic to cancel the “brutal punishment” imposed against Raif Badawi and to review his case and sentence.

The US provided logistics and intelligence support to Saudi-led coalition forces conducting airstrikes on Yemen, which may have included assistance with military targeting.

The January lashing of Raif Badawi provoked strong condemnation from some European Union countries. On February 12, the European Parliament adopted a resolution condemning corporal punishment, calling for the immediate release of Badawi and Waleed Abu al-Khair, and urging EU states to “reconsider their relationship with Saudi Arabia.” In October, the European Parliament awarded Raif Badawi the 2015 Sakharov Prize for Freedom of Thought.