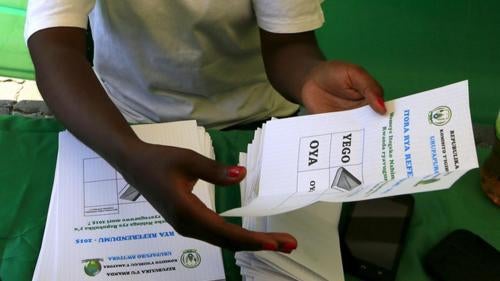 Tight restrictions on freedom of speech and political space remained in place. Some radio stations have broadcast more programs expressing critical views of the government than in previous years, but pro-government views dominated domestic media. The government suspended the BBC’s Kinyarwanda broadcasts inside Rwanda indefinitely, depriving many Rwandans of an important source of independent information.

The parliament approved amendments to the constitution to allow President Paul Kagame to stand for a third term in 2017, to be confirmed in a public referendum.

Rwanda acceded to the Optional Protocol to the United Nations Convention Against Torture on June 30.

Independent civil society organizations are weak, and few document and expose human rights abuses by state agents. The human rights group LIPRODHOR was taken over by elements sympathetic to the ruling party in 2013. The ousted leaders lost a court case in 2014 to challenge the new leadership, but appealed. On March 23, 2015, the High Court of Kigali upheld the 2014 court decision that the case was unfounded on procedural grounds.

One of the only other active independent human rights organizations in Rwanda, the Human Rights League in the Great Lakes Region (LDGL), suffered serious setbacks as a result of internal disputes, effectively paralyzing its work in late 2015. Its executive secretary, Epimack Kwokwo, and several newly elected members of its management committee were questioned at length by the immigration and police in mid-October, mostly about administrative and organizational matters.

Two policemen accused of the 2013 murder of anti-corruption worker Gustave Makonene, a staff member of Transparency International Rwanda, pleaded guilty at their trial, after initially denying the charges. The High Court in Rubavu sentenced them to 20 years’ imprisonment in January.

Pro-government views dominated domestic media, but several private radio stations broadcast programs on human rights and other politically sensitive issues. These included debates on proposed amendments to presidential term limits, and discussions on human rights abuses in the Gikondo Transit Center, triggered by the publication of a Human Rights Watch report in September.

The BBC Kinyarwanda service remained off the air since the government suspended it in October 2014 in response to a BBC television documentary, “Rwanda’s Untold Story.” The Rwanda Utilities Regulatory Authority (RURA), the state body which regulates media, set up a committee, headed by former Prosecutor General Martin Ngoga, to look into complaints about the documentary, including allegations that it had denied the genocide.

The committee’s report, published on February 28, concluded that the BBC had, among other things, abused press freedom and violated Rwandan law relating to genocide denial and revisionism, inciting hatred and divisionism. It recommended that the agreement between the Rwandan government and the BBC be terminated and that authorities initiate criminal and civil proceedings to deal with the alleged offenses. On May 29, RURA indefinitely suspended the BBC Kinyarwanda service.

The ability of the Rwanda Media Commission (RMC)–the media self-regulatory body established in 2013–to operate independently was called into question after its chair, Fred Muvunyi, resigned in May and fled Rwanda. Muvunyi had publicly disagreed with the decision to suspend the BBC and had opposed government proposals to transfer some of RMC’s functions back to RURA.

The ruling Rwandan Patriotic Front (RPF) dominated the parliament. Opportunities for genuine opposition parties to function freely are very limited. Victoire Ingabire, president of the FDU-Inkingi opposition party, remained in prison since 2012, serving a 15-year-sentence for conspiracy to undermine the government and genocide denial.

Parliament initiated a process to amend Rwanda’s Constitution to enable President Kagame to stand for a third term in 2017. By July, it had received petitions from more than 3.78 million people supporting such a move, and claimed to have validated these petitions. Parliamentarians carried out national consultations and said they found a vast majority of Rwandans were in favor of amending the constitution. In late October, the National Assembly voted to reduce presidential term limits from seven to five years, and to limit these to two terms, but to allow President Kagame to stand for a third seven-year term in 2017. In November, the Senate approved these amendments. The changes have to be put to a referendum before a new constitution is adopted.

The opposition Democratic Green Party of Rwanda (DGPR) launched a case at the Supreme Court challenging proposals to lift presidential term limits. On October 8, the Supreme Court dismissed the case, ruling that amendments to the constitution were permissible. The DGPR announced that it would launch a campaign to persuade people to vote against constitutional changes in a referendum.

On September 4, the United States State Department issued a statement expressing concern about the decision by the parliament and president to establish a Constitutional Reform Commission that may amend or remove executive term limits and allow the president to seek a third term in 2017. The State Department expressed renewed concern following the Senate’s approval of constitutional amendments in November.  On December 3, the EU High Representative for Foreign Affairs declared that the fact that the constitutional amendments apply to only one person would weaken the credibility of the reform process and undermine the principle of democratic change enshrined in the African Charter of Democracy, Elections and Governance.

Many poor people were detained at the Gikondo Transit Center—which the government describes as a transit or rehabilitation center—in the capital Kigali, including sex workers, street hawkers, homeless people, suspected petty criminals, and others. Detainees were held in deplorable and degrading conditions and beaten by police or other detainees, with the assent or on the orders of the police. Unlike in previous years, children were no longer detained in Gikondo, but adult men and women were held there throughout 2015. 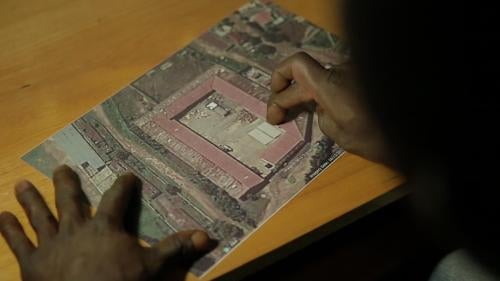 New directives by Kigali City Council were published in the Official Gazette on November 1, setting out the mission and organization of the Kigali Rehabilitation Transit Center (the official name for the Gikondo center).  According to the directives, the center receives people who disturb public order and security. A commission will decide, within 72 hours, whether to keep them in the center for an unspecified “short period” or transfer them to the judicial police, a re-education center, back to their families or another location. Transfers should take place within 14 days of that decision. The directives list the rights of those taken to the center, including the rights to health care, visits and not to be subjected to corporal punishment.

Human Rights Watch continued to receive information on people held unlawfully in other unofficial detention centers, including in military custody. They included at least 23 people detained incommunicado for several weeks in 2014 at Camp Kami, a military camp on the outskirts of Kigali, before being tried by a civilian court for security-related offenses and alleged collaboration with armed groups. A court in Rubavu acquitted some of them and ordered their release in July 2015.

In February, the High Court in Kigali sentenced singer Kizito Mihigo to 10 years’ imprisonment for alleged offenses of formation of a criminal gang, conspiracy to murder, and conspiracy against the established government or the president. His co-accused Cassien Ntamuhanga, a journalist at Amazing Grace radio, was sentenced to 25 years, and Jean-Paul Dukuzumuremyi, a demobilized soldier, to 30 years. Agnès Niyibizi, accused of carrying money to assist in the alleged offenses, was acquitted. All four had been arrested in 2014 on suspicion of communicating with exiled opposition groups, among other things. Mihigo was held incommunicado in an unknown location for several days in April 2014 before being formally questioned by the police and brought to trial.

The trial of three military officers—retired Brig. Gen. Frank Rusagara, Col. Tom Byabagamba, and demobilized Sgt. François Kabayiza—which began in 2014, continued in the military high court. The defendants were charged, among other things, with inciting insurrection and public disorder and tarnishing Rwanda’s image, accusations believed to be related to their alleged contacts with an opposition group. Hearings were adjourned numerous times on procedural grounds. The trial on the substance of the case began on December 7.

The United Nations-run International Criminal Tribunal for Rwanda (ICTR), set up in 1994 to try those responsible for genocide and other serious violations of international humanitarian law in 1994, was due to close at the end of December. The judgment of the last appeal case was due on December 14.

The trial of Jean-Bosco Uwinkindi, referred to Rwanda by the ICTR, was stalled by lengthy procedural delays, more than three years after Uwinkindi’s return to Rwanda in April 2012. The trial of Léon Mugesera, who had been transferred to Rwanda from Canada in 2012 and was accused, among other things, of public incitement to genocide, ended in Kigali. The high court is expected to deliver its judgement in April 2016.

Courts in several other countries handled outstanding genocide cases. In January, a Norwegian appeal court upheld the conviction of Sadi Bugingo, who was sentenced to 21 years’ imprisonment in 2013 for complicity in murder during the genocide. In October, a French court decided not to pursue the case—transferred to France by the ICTR—of Rwandan priest Wenceslas Munyeshyaka for his alleged participation in the genocide, after the French war crimes unit had stated in August that there was a lack of sufficient evidence to prosecute him.

On June 20, Emmanuel Karenzi Karake, head of the intelligence services, was arrested in London on an European arrest warrant following a request by a Spanish judge. In 2008, a Spanish court had indicted him and 39 other senior Rwandan officials for serious crimes and violations of international law, some dating back to the 1990s. On August 10, a court in London dropped the extradition case, because it failed to meet the test required by the applicable UK extradition law that the case would have to have been prosecutable in the UK at the time of the alleged crimes, for it to be extradictable.  In October, the Spanish Supreme Court stayed the case against Karake and other RPF officials indefinitely because of changes in the Spanish universal jurisdiction law in 2014. The case is therefore inactive until the conditions for jurisdiction, such as the presence of the accused in Spain, are fulfilled.