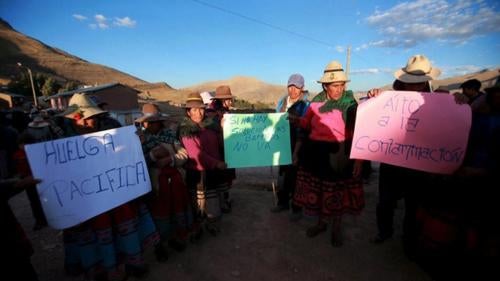 Security forces, responding at times to  violent protests over mines and other large-scale development projects in Peru, continue to use live gunfire that kills and wounds civilians. Official investigations into the deaths and injuries remain inadequate.

Judicial investigations into grave human rights abuses committed during the 20-year armed conflict that ended in 2000 remained slow and limited.

Abuses and Deaths during Protests

During the first nine months of 2015, 12 civilians died from gunshot wounds after police reportedly used live ammunition against protesters. The fatalities occurred despite a police regulation that took effect in January 2015 prohibiting security forces from using lethal weapons during public order operations. In one incident in September, police opened live fire on anti-mining protesters who were trying to get into a mining camp in the southern province of Cotabambas; three people were killed. From July 2011, when President Ollanta Humala took office, through September 2015, 51 civilians were killed during protests in Peru.

In April, police planted evidence on a protester whom police had detained for allegedly engaging in violence during an anti-mining protest in the province of Islay. After local journalists released a video showing that police had planted the evidence, the protester was released and the minister of the interior announced the replacement of the chief responsible for the operation.

In January 2014, Law 30151 took effect, providing immunity from prosecution to “armed forces and police personnel who in fulfillment of their duty and using their weapons or other means of defense, cause injury or death.” This amendment to the criminal code eliminated language that made immunity conditional on police using lethal force in compliance with regulations. It departs from international standards that require that law enforcement officers use force in accordance with the principles of necessity and proportionality, and that they be held accountable for misusing force.

In July 2015, the Constitutional Court ruled that military courts could not try members of the military accused of committing abuses against civilians in public security operations. In the case, brought by Peruvian human rights activists in 2011, the court provided a restrictive interpretation of a decree adopted by President Alan García in 2010 that had opened the door to trying such cases in military courts. However, Law 30151 continues to restrict police accountability.

In August, President Humala, who signed law 30151, issued a decree that limits the use of force by police. Under the decree, police should only employ lethal force when it is “strictly necessary” in the face of a “serious and imminent risk” of grave harm. But with Law 30151 limiting criminal accountability, it remains to be seen how the decree will affect police behavior.

In a landmark trial, former President Alberto Fujimori was sentenced in 2009 to 25 years in prison for killings and “disappearances” in 1991 and 1992. Courts have consistently rejected petitions to reverse his sentence. Fujimori’s intelligence advisor, Vladimiro Montesinos, three former army generals, and members of the Colina group, a government death squad, are also serving sentences ranging from 15 to 25 years for the assassination in 1991 of 15 people in the Lima district of Barrios Altos, and for six “disappearances.”

Courts have made much less progress in addressing violations that occurred under the earlier administrations of Fernando Belaúnde (1980-1985) and Alan García (1985-1990). In a report issued in August 2013 to mark the 10th anniversary of the Truth and Reconciliation Commission’s final report, the human rights ombudsman found that, despite initial efforts, Peru had failed to consolidate a specialized judicial system with sufficient staff and resources to bring most cases to court.

As of November 2015, only about 2 percent of the human rights violations committed during the armed conflict had been brought to trial, according to Human Rights Trials in Peru, a project based at George Mason University that monitors human rights prosecutions. In 2015, court hearings continued into their fifth year in two emblematic cases: torture and disappearances at the Los Cabitos military base in Ayacucho in 1983 and a massacre at Accomarca in 1985 in which an army unit killed 62 peasants.

At time of writing, President Humala’s former minister of interior, Daniel Urresti, was facing trial for his alleged role in the 1988 murder of Hugo Bustíos, the Ayacucho correspondent for Caretas magazine. Two soldiers were convicted in 2007 for Bustíos’ murder, including one who testified that Urresti had commanded the soldiers who ambushed and shot Bustíos before blowing up his body with a grenade. President Humala appointed Urresti to the cabinet in June 2014 even though he was already facing charges for Bustíos’ death; Humala replaced him in February 2015.

In August, the human rights ombudsman concluded that reparations for victims of the country’s internal armed conflict, made pursuant to a 2005 law, had been “insufficient” and that some programs called for in the law still had not been implemented—10 years after it was passed.

The Humala administration has failed to comply fully with its international obligations to prevent torture, which continues to be a chronic problem in Peru. In February 2015, President Humala vetoed a bill passed by Congress in December 2014 that would have created the National Preventive Mechanism Against Torture. He argued that the mechanism’s costs had not been included in the 2015 national budget. The bill was returned to Congress. Under the Optional Protocol to the Convention against Torture and Other Cruel, Inhuman or Degrading Treatment (OPCAT), which Peru ratified in 2006, the country should have implemented a National Preventive Mechanism Against Torture by 2007.

In March 2015, two unidentified men shot bullets at the building of a local TV channel, Canal 21, in the municipality of Vista Alegre in the southwestern province of Nazca. The owner of the channel said that the attack occurred soon after he had aired allegations that the local mayor had made death threats against two residents of Vista Alegre.

In May 2015, two journalists from the TV channel Cable Vision said they had received several anonymous threats that the police would detain them after they reported on the misuse of force by policemen during protests against the Tía María mining project in the southwestern province of Islay.

Women and girls in Peru remain at high risk of gender-based violence. In August, the Minister of Women’s Affairs reported 96 cases of “femicide” (the killing of a woman in certain contexts, including of domestic violence and gender-based discrimination) in 2014, and 52 between January and July 2015.

In September, Congress passed a law that provides for comprehensive measures to prevent punish and eradicate violence against women. The law builds on existing judicial measures to protect women at risk, and mandates the creation of shelters to provide temporary refuge from abuse. The Committee on the Elimination of Discrimination Against Women, in its review of Peru in July 2014, had called on the country to pass a law against gender-based violence.

Women and girls in Peru have the right to seek abortions only in cases of risk to their health or life. In May 2015, Congress rejected a bill that would have decriminalized abortion when a pregnancy was the result of rape, but another proposal remained pending at time of writing.

In March 2015, Congress voted down a bill that proposed recognizing civil unions for same-sex couples. The vote sparked one of Peru’s biggest public debates on the future of lesbian, gay, bisexual, and transgender rights. Following the vote, thousands of Peruvians took to the streets of Lima to demand marriage equality for same-sex couples.

In June, the United Nations Working Group on Enforced or Involuntary Disappearances expressed concern about how few cases of “disappearances” had been brought to trial and about Peru’s slow progress in the search for victims. The group also noted that most of the recommendations made by the Truth and Reconciliation Commission had not been implemented, 12 years after the commission’s final report.

When it was a member of the UN Human Rights Council in 2014, Peru supported resolutions to put human rights violations in North Korea, Sri Lanka, Belarus, Iran, the Occupied Palestinian Territories, and Syria under close scrutiny.