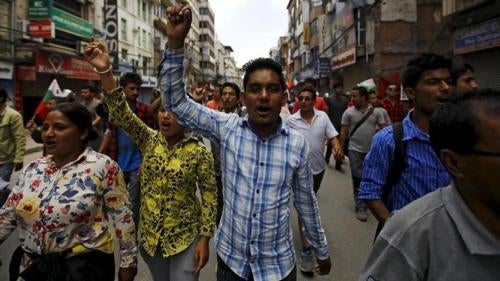 Devastating earthquakes on April 25 and May 12, 2015, left an estimated 9,000 people dead and nearly 20,000 injured. Rescue and relief efforts were slow to get off the ground, in part due to damage to the country’s already-weak infrastructure.

Within months of the earthquakes, the four main ruling political parties announced that they had broken through a more than six-year deadlock on drafting a new constitution. Among other reforms, the new constitution contains equal rights and affirmative action clauses for the country’s many ethnic minority communities and lower castes, and it outlaws capital punishment.

However, the new constitution, which was put forward for only one week of public consultation, did not address longstanding complaints by historically marginalized communities in Nepal’s southern Terai region, leading to months of protests and violence there. The new constitution also fails to guarantee people with disabilities full access to education and work.

While the government made some headway in appointing a Truth and Reconciliation Commission to address longstanding grievances arising from the country’s decade-long civil war that ended in 2006, it failed to bring the commission in line with international human rights standards and practices. Courts continued to delay hearings on conflict-era cases.

The earthquakes in April and May left some 2.8 million people in need of humanitarian assistance. In addition to the tens of thousands of deaths and injuries, several hundred thousand people ended up displaced and many continue to live in temporary settlements or makeshift shelters. Many affected communities live in rural areas which are difficult to access, and have received minimal assistance for emergency housing and other relief. Vulnerable communities including people with disabilities, women, and children remain at particular risk.

Although the government received over US$4 billion for earthquake assistance, none of the funds had been paid out at time of writing, and rehabilitation efforts remained slow.

The 2006 ceasefire agreement ending Nepal’s civil war contained a promise, enshrined in Nepal’s interim constitution, that a new constitution would soon be drafted that, among other things, would provide equality and a greater role in governance for traditionally marginalized communities in the Terai region.

When the main parties hammered out a draft constitution following the devastation of the earthquakes without genuine public consultation and without addressing the grievances of those communities, many groups, particularly along Nepal’s southern and far-western belts, declared strikes, blocked roads, and in many cases shut down normal daily activities for weeks at a stretch.

In September, an estimated 45 persons, including 9 policemen, were killed when protests turned violent. In some districts, the government responded by deploying the army and in others by instituting curfews. Most of the protester deaths were attributed to excessive use of force by the security forces.

The ongoing protests led to an effective blockade of trade and transit. By November, fuel and medical supplies were in short supply given that most of landlocked Nepal’s goods come in over land through trading posts along its border with India. The Nepali government accused the Indian government of imposing an economic sanction on Nepal, which India denied. Some supplies came in through China, but not in sufficient quantities to meet nationwide demand.

Due to flawed citizenship laws, an estimated 4 million people are forced to live without official status and at risk of statelessness. Despite promises of reform, many people, particularly women, children born out of wedlock, or children of a refugee or naturalized parent, are ineligible for drivers’ licenses, passports, bank accounts, voting rights, higher education, and government welfare schemes. The law makes it particularly difficult for women to secure legal proof of citizenship, especially when male family members refuse to assist them or are unavailable to do so. The citizenship provisions in the constitution do not adequately rectify these problems, and instead raise additional hurdles for children born to a non-Nepali father.

Authorities have made little progress on justice for serious abuses committed by both sides during the civil war. At least 13,000 people were killed and over 1,300 forcibly disappeared during the decade-long conflict.

While Nepal has delivered interim monetary and in-kind compensation to the families of those who were “disappeared” or killed during the conflict, others, such as survivors of sexual violence or torture, have received no compensation from the state.

In March 2015, Nepal’s Supreme Court ruled against problematic provisions of the 2014 Truth, Reconciliation and Disappearances Act, striking down amnesty provisions and emphasizing that the Attorney General’s Office retains authority to recommend prosecutions, and directed the government to remedy the law.

In February 2015, the government set up legal and institutional frameworks for the Truth and Reconciliation Commission and Disappearances Commission, both called for in the act, and even appointed some initial commissioners without amending the act as directed by the Supreme Court. The work of the commissions remained stalled at time of writing.

Although large numbers of Nepali migrants seek work abroad each year, the government has done little to support and protect them. Following reports in 2014 that hundreds of Nepali and other migrant workers had died in Qatar, the government attempted to set up stronger protection measures, but they had not been properly implemented at time of writing.

Nepal continues to ban women under age 30 from traveling to the Gulf states for employment as domestic workers. While motivated by protection concerns, the ban is discriminatory and forces women desperate for work to migrate through irregular channels, putting them at greater risk of exploitation.

Following the earthquake there were fears of increased trafficking. Attention by government and security forces to the increased vulnerability of women and children helped stem some of the potential risks.

NGOs report that the document application process remains ad hoc, however, and the majority of transgender applicants face discrimination and abuse in the process, including demands from government officials that they produce “medical proof” before being allowed to change their legally recognized gender.

The constitution promulgated in September recognizes that citizenship is available in three genders, and protects “gender and sexual minorities” in clauses related to equality before the law and social justice.

India immediately deployed humanitarian rescue assistance to Nepal after the April 25 earthquake, with the United Kingdom, United States, and China following shortly thereafter. The United Nations were slower to respond, in spite of years of earthquake readiness preparation. The government came under intense criticism when it refused offers from the UK and others to aid in the relief effort.

The international community remained largely silent on Nepal’s contentious constitution drafting process. The call by India, the US, and the UK to engage in broad and transparent public consultations went unheeded by the government.

Cooperation between Nepal and China’s border security forces led to increased risk that Nepal will forcibly return Tibetan refugees to China. Tibetans detained by Chinese authorities while attempting to cross the border irregularly from Nepal are routinely imprisoned and physically abused.