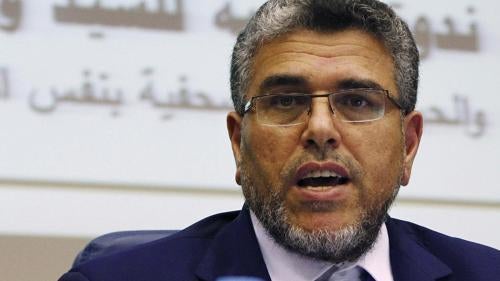 More positively, a new law took effect that ended military trials of civilians, and authorities for the first time legally recognized a human rights organization in Western Sahara led by people critical of Moroccan rule. Morocco granted temporary legal status to United Nations-recognized asylum-seekers and thousands of economic migrants, pending an overhaul of its laws on asylum and foreigners on Moroccan soil.

Laws that criminalize acts deemed harmful to the king, the monarchy, Islam, or Morocco’s claim over Western Sahara limited the rights to peaceful expression, assembly, and association.

Independent print and online media continued to investigate and criticize government officials and policies, but faced prosecution and harassment if they criticized the king or his advisors. The press law mandates prison terms for “maliciously” spreading “false information” that authorities believe may disturb public order, or for speech ruled defamatory.

Authorities arbitrarily imposed administrative obstacles to impede the efforts of journalist Ali Lmrabet to register a new satirical weekly, following his completion of a 10-year sentence banning him from practicing journalism in Morocco. Police in Rabat confiscated tapes from and expelled two French television journalists on February 16 on the grounds that they had been filming in the country without authorization.

Moroccan state television allows some space for debate and investigative reporting but none for direct criticism of the palace or dissent on key issues.

Authorities tolerated numerous marches and rallies demanding political reform and protesting government actions but forcibly dispersed some peaceful gatherings. In Western Sahara, authorities prohibited all public gatherings deemed hostile to Morocco’s contested rule over that territory, dispatching large numbers of police who blocked access to demonstrations before they could even assemble.

Officials continue to arbitrarily prevent or impede many associations from obtaining legal registration, although the 2011 constitution guarantees freedom of association. However, authorities registered the Sahrawi Association of Victims of Grave Human Rights Violations Committed by the Moroccan State (ASVDH) in 2015, nine years after it first applied and eight years after an administrative court ruled that authorities had wrongly refused to register it.

Morocco also registered several, but not all, associations formed to defend the rights of migrants in Morocco. In July, a Tiznit first instance court ordered the closure of the Ifni Memory and Rights Association, partly on grounds that it harmed Morocco’s “territorial integrity” by asserting the rights and identity of the population in the Ifni region.

Among the many associations arbitrarily denied legal registration were scores of charitable, cultural, and educational associations whose leadership includes members of al-Adl wal-Ihsan (Justice and Spirituality), a nationwide movement that advocates an Islamic state and questions the king's spiritual authority.

In October, authorities charged historian Maâti Monjib, Hicham Mansouri, and three other associational activists with accepting foreign funding “to harm internal security,” punishable by up to five years in prison. The case, set to go to trial in 2016, centers on a foreign-funded workshop to train Moroccans in the use of a smartphone application to practice “citizens’ journalism.”

Morocco expelled several foreign visitors who arrived on fact-finding missions to Western Sahara, most of them European citizens who openly supported Sahrawi self-determination.

A new law took effect in July ending military court jurisdiction over civilian defendants. The case of Mbarek Daoudi, a Sahrawi activist facing a military court trial since September 2013 on minor weapons charges, was transferred to a First Instance Court in Guelmine, which sentenced him to three months in prison in March. He remained in custody to face a second trial in an Agadir court, which on December 3 convicted and sentenced him to five years in prison.

Twenty-two other Sahrawis continued serving prison sentences of between 20 years and life that a military court imposed in 2013. The men, who include a few well-known activists, had been charged in connection with violence that erupted on November 8, 2010, when authorities dismantled the Gdeim Izik protest camp in Western Sahara. Eleven security officers were killed in the violence. The military court failed to investigate defendants’ allegations that police had tortured or coerced them into signing false statements, and relied almost exclusively on those statements to convict. The new law ending military court trials of civilians did not retroactively benefit these defendants.

In November 2014, Morocco deposited with the United Nations its ratification of the Optional Protocol of the Convention against Torture (OPCAT). At time of writing, it had not designated the National Protection Mechanism that OPCAT envisions for inspecting places of detention.

Courts failed to uphold fair trial rights in political and security-related cases. Authorities continued to imprison hundreds of Islamists suspected of violence arrested in the wake of the Casablanca bombings of May 2003. Many were serving sentences imposed after unfair trials following months of secret detention, ill-treatment and, in some cases, torture.

Police have arrested hundreds more suspects since further terrorist attacks in 2007 and 2011. Courts convicted many on charges of belonging to a “terrorist network,” recruiting, undergoing military training, or preparing to join Islamist fighters in Iraq, Syria, or elsewhere. Morocco’s 2003 counterterrorism law contains an overly broad definition of “terrorism” and allows for up to 12 days of garde à vue (pre-charge) detention.

Moroccan courts continued to impose the death penalty, but authorities have not carried out executions since the early 1990s.

Prison overcrowding is exacerbated by the tendency of courts to order the detention of suspects awaiting trial. As of August 31, 41 percent of prisoners—or 31,334 out of a total of 76,794—were in pretrial detention, according to the prison administration.

Leftist activist Wafae Charaf continued to serve a two-year prison sentence for slander and “falsely” reporting an offense after she filed a complaint alleging that unknown men abducted and tortured her after a workers’ protest in April 2014 in Tangiers.

Oussama Husn, a February 20 youth reform movement activist, was serving a three-year prison sentence imposed in 2014 on similar charges after he put online a video in which he recounts having been abducted and tortured by unknown men. These sentences could have a chilling effect on people wishing to file complaints of abuse by security forces.

Right to a Private Life

Moroccan courts continued to jail persons for same-sex conduct under article 489 of the penal code, which prohibits “lewd or unnatural acts with an individual of the same sex.” In October, the UN Committee on Economic, Social and Cultural Rights, in its concluding observations on Morocco’s periodic report, urged the “repeal without delay” of article 489.

A Hoceima appeals court upheld on December 30, 2014 a lower-court conviction of two men for homosexuality, sentencing one to six months in prison and the other, who was also convicted on an attempted bribery charge, to 12 months. A first-instance court sentenced three men from Taourirt in May to three years in prison for homosexuality, a sentence that the Appeals Court of Oujda in July reduced to a few months. In both cases, the convictions relied on confessions that the defendants repudiated in court.

After a gay-bashing incident on a Fez street on June 29, Justice Minister Moustapha Ramid said the assailants should be prosecuted but also made homophobic remarks, including a call on homosexuals to refrain from “provoking” society. A court sentenced two men to prison for their role in the assault.

A Rabat Appeals Court in May upheld 10-month prison terms for adultery and “complicity for adultery” against Hicham Mansouri and a female friend after police broke into his apartment and allegedly caught them in compromising circumstances. The court failed to consider considerable exculpatory evidence. Mansouri’s employment at the Moroccan Association for Investigative Journalism (AMJI) raised suspicions that police surveillance and prosecution was retaliation for his associational activities.

In March, police in Casablanca arrested Moustapha Erriq, a senior figure in the Islamist opposition Adl wal Ihsan movement, along with a female friend on suspicion of adultery, but released them three days later after Erriq’s wife refused to press charges.

Implementation continued of a 2013 plan to overhaul national policies toward migrants and asylum-seekers, including by providing them with certain basic rights. Morocco’s refugee agency granted one-year renewable residency permits to more than 500 UNHCR-recognized refugees. At time of writing, Morocco had not determined the status it would grant to more than 1,700 Syrians who UNHCR recognizes as prima facie refugees.

Morocco also granted, in the context of a one-time regularization procedure that ended on December 31, 2014, one-year renewable residency permits to thousands of sub-Saharan migrants who were not asylum-seekers but who met certain criteria in the 2013 plan. Some Syrians also obtained one-year residency permits under this procedure.

The 2004 Family Code, which improved women’s rights in divorce and child custody, discriminates against women with regard to inheritance and procedures to obtain divorce. The code raised the age of marriage from 15 to 18, but judges routinely allowed girls to marry below this age. There is no law that specifically criminalizes domestic violence or that establishes protections for domestic violence victims.

Morocco’s labor law excludes domestic workers from its protections, which include a minimum wage, limits to work hours, and a weekly rest day. In 2006, authorities presented a draft law to regulate domestic work and reinforce existing prohibitions on domestic workers under 15 years old. The draft had been modified but not adopted at time of writing.

France, a close ally and Morocco’s leading source of foreign investment, refrained from publicly criticizing Moroccan human rights violations. Morocco and France resumed their bilateral judicial cooperation agreement, which Morocco suspended in 2014 after a French investigating judge served subpoenas on a visiting Moroccan police commander based on a complaint filed by a victim alleging complicity in torture.

The two countries amended the agreement to provide that a judge who receives a complaint about a crime committed in the other country should immediately inform the judicial authorities of the other country and consider transferring the case to that country’s courts in priority, an option that, if pursued, would shield Moroccan officials from French justice.

Morocco has a poor record investigating and prosecuting torture and victims have resorted to French courts as a last resort. French President François Hollande visited Tangiers in September for a meeting with King Mohammed VI, declaring that “our difficulties have been … put behind us,” and avoided public mention of human rights.

The United States, another close ally, proffered no public criticism of Morocco’s human rights record. In September, the Millennium Challenge Corporation, an independent US state agency that provides grants to countries “that demonstrate a commitment to good governance, investments in people and economic freedom,” approved a US$450 million five-year grant to Morocco to support education and land productivity reforms. Morocco is the MCC’s second leading aid recipient after Tanzania.

The UN Security Council in April renewed the mandate of UN peacekeeping forces in Western Sahara (MINURSO) without broadening it to include human rights monitoring, which Morocco strongly opposes. The Office of the High Commissioner of Human Rights conducted an investigation in both Moroccan-controlled Western Sahara and the Polisario-run refugee camps near Tindouf, Algeria, in 2015, but did not report publicly on its findings.