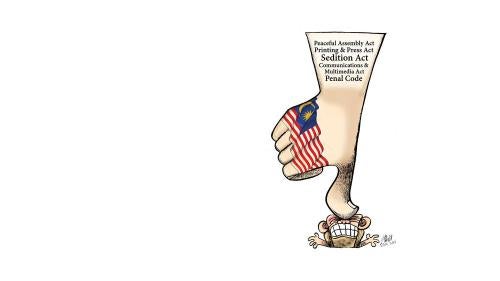 Malaysia’s respect for human rights plummeted in 2015, with increased harassment and persecution of human rights defenders, activists, political opposition figures, and journalists. The government reacted to rising public discontent over issues ranging from allegations of corruption to the treatment of former political opposition leader Anwar Ibrahim with a wave of repression, often relying on broad and vaguely worded criminal laws to target its critics.

The biggest threat to free speech remains the Sedition Act, which has been used to prosecute those who criticize the government or the judiciary, or make remarks the government considers to be derogatory toward the sultans (traditional Malay state rulers) or disrespectful of religion.

The Federal Court rejected a constitutional challenge to the law in October. More than 33 people, including seven opposition parliamentarians, have been charged with sedition since 2013. Parliamentarians who receive fines of more than 2,000 Malaysian ringgit (US$475) or are sentenced to more than a year in prison lose their seats and are banned from politics for five years.

In April, the ruling Barisan Nasional, or National Front, coalition passed amendments to the Sedition Act to increase the penalties for violations and to make it easier to use the law against online speech.  The amendments created a new offense of “aggravated sedition,” providing a penalty of up to 20 years in prison for “seditious” statements that result, even indirectly, in harm to property or bodily injury. The strengthening of the law was a major reversal by Prime Minister Najib Razak, who had repeatedly promised to revoke the Sedition Act and replace it with what he called a Harmony Act.

The government continued to use the Printing Presses and Publication Act (PPPA) to suppress publications and limit content. The PPPA requires all publishers to obtain a license and enables the government to ban publications “likely to be prejudicial to public order,” or “likely to alarm public opinion.” In July, the Ministry of Home Affairs used the PPPA to suspend the publication of two newspapers for three months after they reported on allegations of corruption involving the government-owned investment fund 1 Malaysia Development Berhad (1MDB), whose board of advisors is chaired by Prime Minister Najib. The High Court overturned the suspension in September.

The government also used the PPPA to ban “any yellow coloured clothing” bearing the logo of the Coalition for Free and Fair Elections (known as Bersih, meaning “clean” in Malay) and any publications about a planned Bersih rally. Despite the ban, which came into effect two days before a major rally Bersih organized in downtown Kuala Lumpur, tens of thousands of people wore yellow Bersih t-shirts to the peaceful 34-hour rally August 29 to 30. The government has instituted criminal investigations of several opposition politicians for wearing Bersih t-shirts.

The government has also used laws criminalizing defamation and statements that could lead to a breach of the peace to arrest and prosecute opposition politicians and activists for critical speech.  Article 233 of the Communications and Multimedia Act, which outlaws any communication the government considers “obscene, indecent, false, menacing or offensive,” has been used to prosecute users of social media, investigate media, and block websites reporting on the 1MDB scandal or publishing information about the Bersih rally in August.

Lena Hendry, programme manager for the Pusat Komas Freedom Film Fest, was set to go on trial in December for allegedly violating the Film Censorship Act for her involvement in screening the documentary film “No Fire Zone: The Killing Fields of Sri Lanka” in Kuala Lumpur in July 2013. The Malaysian Federal Court in September 2015 rejected Hendry’s constitutional challenge to the Film Censorship Act.

A series of major demonstrations took place in Malaysia during 2015. In most instances, the police did not interfere with the rallies, but subsequently arrested and charged many of those involved with “unlawful assembly” or other offenses under the penal code, or with sedition, for statements they made during the rallies. Authorities declared the rallies “illegal” at least twice before they even took place.

In October, the Court of Appeals upheld the provision of the Peaceful Assembly Act that allows for criminal prosecution of rally organizers who fail to give police 10 days’ advance notice, directly contradicting an April 2014 decision by the same court. After the decision, the government promptly charged opposition politician Nik Nazmi, who had successfully challenged the law in 2014, for failure to give notice of the very rally that was the basis for his constitutional challenge. The authorities also charged two of the organizers of the August Bersih rally with failure to give proper notice, even though Bersih organizers twice met with the police more than 10 days before the rally.

The Societies Act restricts the right to freedom of association by requiring that organizations with seven or more members register with the registrar of societies. The law gives the minister of home affairs “absolute discretion” to declare an organization illegal, and also gives the government supervisory authority over political parties. As of November, the registrar remained locked in a dispute with the opposition Democratic Action Party, refusing to recognize the party’s central executive committee or its 120 branch offices after more than two years of investigation. According to the Registry of Societies’ website, the registrar rejected more than 38 percent of the applications submitted in 2015 to form organizations.

The government’s politically motivated prosecution of former opposition leader Anwar Ibrahim on sodomy charges—a textbook example of the political use of discriminatory laws—culminated in February, when the Federal Court upheld his conviction and sentence of five years’ imprisonment. Since entering prison he has suffered from a variety of health problems, including a shoulder injury and back problems. In October, the United Nations Working Group on Arbitrary Detention determined that Anwar was being arbitrarily detained and demanded his immediate release and reinstatement of his political rights.

Police torture of suspects in custody, in some cases resulting in deaths, and excessive use of force in apprehending suspects continued to be serious problems in 2015. Human rights NGO Suara Rakyat Malaysia documented at least 10 suspicious deaths in police custody in the first nine months of the year, despite promises by Home Minister Ahmad Zahid Hamidi in May 2014 to install closed circuit television equipment in all places of police detention.

The government continues to ignore calls from the Malaysian Bar Council and civil society groups to establish an Independent Police Complaints and Misconduct Commission with the power to receive complaints about police conduct, independently investigate abuses, and sanction those found to have engaged in misconduct. The Yang di-Pertuan Agong appointed a new chairman and new commissioners for the existing Enforcement Agencies Integrity Commission in November 2014.

On November 3, 2015, the commission for the first time issued a report finding that the police were responsible for a death in custody, holding that physical violence during custody and interrogation was the cause of the death of a young man from Johor detained in November 2014. The inspector general of police has stated that the police officers responsible will not be shielded from criminal charges, but at time of writing had done little to implement that promise.

In December 2015, the government rushed through a broad and vaguely worded National Security Council Act that empowers the prime minister to declare security areas within which restraints on police powers would be suspended and the authorities would have the ability to conduct arrests, searches and seizures without warrants. In April, the government passed a new, restrictive Prevention of Terrorism Act, which gives a government-appointed board the authority to impose detention without trial for up to two years, renewable indefinitely, to order electronic monitoring, and to impose other significant restrictions on freedom of movement and freedom of association, with no possibility of judicial review.

The authorities invoked the similarly restrictive Security Offenses Special Measures Act, which allows for preventive detention of up to 28 days with no judicial review, to detain two people involved in efforts to expose government corruption. Khairuddin Abu Hassan and his lawyer Matthias Chang were arrested on September 18 and October 8, respectively, for filing police reports about 1MDB in several foreign countries.

They were subsequently charged with attempting to commit economic sabotage of the state under Penal Code section 124L. If convicted, they could be sentenced to up to 15 years in prison.

Malaysia retains the death penalty for various crimes, including drug trafficking, and is not transparent about when and how decisions are made to carry out executions. Nearly 1,000 people are estimated to be on death row.

The discovery of mass graves on the Thai-Malaysia border containing the remains of suspected victims of trafficking highlights the continuing problem of trafficking in Malaysia. Approximately 99 bodies, many reportedly ethnic Rohingya from Burma, were found in May, and another 24 graves were discovered in August. Little information has been made public about progress in identifying and investigating suspects involved in these trafficking camps or government officials who may have aided and abetted operations.

The Malaysian government has failed to effectively implement the amendments passed in 2014 to Malaysia’s 2007 anti-trafficking law, in particular by taking the necessary administrative steps to provide assistance and work authorization to all trafficking victims who desire it, while ensuring their freedom of movement. Despite these failures, the United States government in July upgraded Malaysia in its annual Trafficking in Persons Report in what appeared to be a political move connected to the Trans-Pacific Partnership Agreement for trade.

Discrimination against lesbian, gay, bisexual, and transgender people is pervasive in Malaysia, and that discrimination reaches the highest levels of government. Prime Minister Najib was reported to have asserted at an international seminar on August 18 that sexual and gender minorities pose a threat to Malaysian society, arguing that "groups like the Islamic State and lesbians, gay, bisexuals, and transgenders (LGBT) both target the younger generation and seem successful in influencing certain groups in society.”

The Federal Court decided in October to reverse a lower court ruling that the state of Negeri Sembilan’s prohibition on “a male person posing as a woman” was unconstitutional. The ruling seriously undermined the rights of transgender people. In June, nine transgender women were convicted by a Sharia court in Kelantan under a similar state prohibition.

On September 10, two men wielding iron bars brutally beat one of Malaysia’s most prominent transgender activists, Nisha Ayub, outside her apartment building, requiring her hospitalization. She reported the apparent hate crime to the police, but at time of writing the police had not identified any suspects.

In November, the Malaysian government announced plans to cut its funding to Suhakam, the national human rights commission, by 50 percent, in what is widely seen as retaliation for the commission’s independent reporting.

Malaysia was the chair of the Association of Southeast Asian Nations (ASEAN) and the East Asia Summit in 2015 and is a member of the UN Security Council. The country positions itself in the UN and the international community as a moderate Muslim state prepared to stand up to Islamist extremism, earning support from the US and its allies. Malaysia also has continued its engagement with China, its largest trading partner.