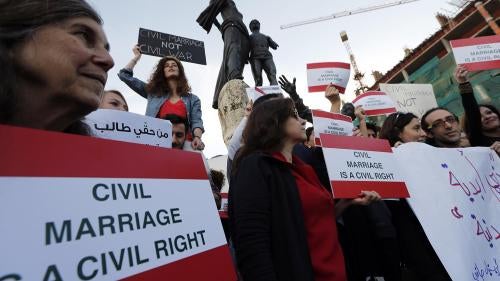 Lebanon’s political institutions were paralyzed as the country remained without a president, and parliamentary elections—initially planned for June 2013 and then November 2014—were postponed again until 2017. The government’s failure to provide basic services, including garbage removal, led to a wave of protests starting in August. In some instances, security forces used excessive force to quell these protests.

Amid increased security threats, the Lebanese Armed Forces and Internal Security Forces (ISF) arrested suspects in relation to attacks on civilians in Lebanon or involvement with armed groups in Syria. Some of these suspects have suffered from lengthy pretrial detention and told Human Rights Watch that security forces had beaten, severely whipped, and tortured them, including with sticks, cigarettes, batons, and rifle butts.

In the context of conducting security operations, forces also targeted Syrian refugee settlements, sometimes arbitrarily detaining all adult males and later ill-treating or torturing some of them.

In June 2015, leaked videos showed ISF members torturing inmates in Roumieh prison north of Beirut following a prison riot. The interior minister confirmed the authenticity of the videos. Media reports said that 12 ISF members were referred for investigation; no update was provided regarding the outcome of the investigations.

Lebanon has not yet established a national preventive mechanism to visit and monitor places of detention, as required under the Optional Protocol to the Convention against Torture, which it ratified in 2008. Legislation to create such a body has stalled in parliament for several years.

By November 2015, approximately 1.1 million Syrian refugees in Lebanon were registered with the United Nations High Commissioner for Refugees (UNHCR). In 2015, Lebanon set new entry regulations for Syrians that effectively barred many asylum seekers fleeing Syria from entering Lebanon, save for those who qualified for entry under exceptional humanitarian criteria. 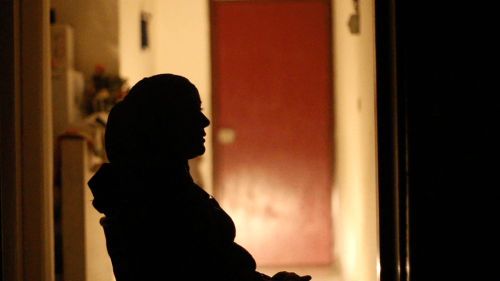 In April, the Ministry of Social Affairs requested that UNHCR  deregister all refugees who entered Lebanon after January 5 as part of ongoing governmental efforts to decrease the number of Syrian refugees in the country. Since May, UNHCR suspended the registration of Syrians in compliance with the government’s request. Lebanon is not a signatory to the 1951 UN Refugee Convention, and refugees lacking legal status therefore risk detention for illegal presence in the country. Approximately 70 percent of Syrian refugees in Lebanon reportedly fall below the poverty line and rely on aid to survive.

Human Rights Watch also documented a few isolated incidents of deportations of Syrians and Palestinians back to Syria, putting them at risk of arbitrary detention, torture, or other persecution. Two Syrian inmates disappeared following their transfer into the custody of General Security in October and in November 2014; their relatives fear they have been forcibly deported to Syria.

In August and September, police used excessive force in a number of instances to disperse protesters demonstrating against the government’s failure to resolve a trash removal problem, as well as corruption. On August 22 and 23, Lebanese security personnel used rubber bullets, tear gas, water cannons, rifle butts, and batons to control protesters. Security forces also fired live ammunition in the air. On August 19 and 29, and September 1 and 16, police officers also beat and arrested protesters.

Lebanon’s State Prosecutor Samir Hammoud tasked a military prosecutor, who under Lebanese law has jurisdiction over crimes involving the security forces, to investigate the violence. Detained protesters charged with violence have been referred to military trials.

While freedom of expression is generally respected in the country, defaming or criticizing the Lebanese president or army is considered a criminal offense that can carry a jail sentence.

In January, Lebanese authorities summoned Al Jazeera journalist Faisal Qassem over charges of insulting the army in Facebook posts and, given his failure to show up to two hearings, issued an warrant of search and inquiry against him.

In October, political activist Michael Douaihy was released after General Security arrested and held him for nine days,  and ordered him to pay a fine of $200 over a Facebook post criticizing the agency. Douaihy was indicted under article 386 of the Lebanese penal code that criminalizes libel and defamation against the president, public officials, and private individuals. Also in October, journalist Mohammed Nazzal was sentenced for six months in abstenia and fined US$666 for a Facebook post criticizing the Lebanese judiciary.

Migrant domestic workers, primarily from Sri Lanka, Ethiopia, the Philippines, and Nepal are excluded from the labor law and subject to restrictive immigration rules based on the kafala system, visa sponsorship that ties workers to their employers and puts them at risk of exploitation and abuse.

The most common complaints documented by the embassies of labor-sending countries and civil society groups include non-payment or delayed payment of wages, forced confinement to the workplace, refusal to provide time off, and verbal and physical abuse. Migrant domestic workers suing their employers for abuse face legal obstacles and risk detention and deportation due to the restrictive visa system.

In December 2014, six Lebanese workers submitted a request to the Labor Ministry to form a union for domestic workers. With support of the International Labour Organization (ILO), the International Trade Union Federation (ITUC), and the Federation of Trade Unions of Workers and Employees in Lebanon (FENASOL), approximately 350 domestic workers of various nationalities gathered for the union’s inaugural congress on January 25, 2015.

The Labor Ministry denounced the formation of a domestic workers union on the grounds that it was illegal, as domestic work was not covered by the labor law. According to union members, the application for the union had yet to be decided at time of writing.

Starting in May 2014, nearly a dozen female migrant workers, many longstanding residents of Lebanon, reported being denied residency renewal for themselves and their children. Some were told their children were not allowed to remain with them in Lebanon and were given a short period of time to leave the country.

In March 2015, after months of advocacy by Human Rights Watch and other international and local nongovernmental organizations, General Security reversed this decision and migrant workers and their children are once again being issued residency renewals.

Despite women's active participation in all aspects of Lebanese society, discriminatory provisions remain in personal status laws, nationality laws, and the criminal code.

Judges have issued scores of temporary protection orders since the enactment of the 2014 Law on the Protection of Women and Family from Domestic Violence. The new law establishes important protection measures and related policing and court reforms but leaves women at risk, as it still fails to criminalize all forms of domestic violence, including marital rape. Some women continued to report that police were unwilling to investigate their complaints, and the fund to assist victims of domestic violence has not yet been set up. Women continue to face obstacles in pursuing criminal complaints of domestic violence, mostly due to lengthy delays.

Under the 15 various Lebanese personal status laws, which are determined by an individual’s religious affiliation, women across religions continue to suffer discrimination, including unequal access to divorce, child custody, and property rights. Unlike Lebanese men, Lebanese women cannot pass on their nationality to foreign husbands and children and continue to be subject to discriminatory inheritance laws.

Lebanon’s penal code punishes “any sexual intercourse contrary to the order of nature” with up to one year in prison. In recent years, authorities conducted raids to arrest persons allegedly involved in same-sex conduct, some of whom were subjected to torture.

Lebanese authorities continue to take no meaningful steps towards acting on proposals to set up an independent national commission to investigate the fate of people forcibly disappeared during the country’s 1975-1990 civil war and its aftermath.

In October 2012, Justice Minister Shakib Qortbawi put forward a draft decree to the cabinet to establish a national commission to investigate the fate of the “disappeared,”  but no further action was taken. In September 2014, the government finally provided the families of the disappeared with the files of the Official Commission of Inquiry that had been appointed in 2000 to investigate the fate of the kidnapped. These showed that the government had not conducted any serious investigation.

Syria, Iran, and Saudi Arabia maintain a strong influence on Lebanese politics through local allies and proxies, and increasingly so as the conflict in neighboring Syria drags on.

Many countries, including the United States, United Kingdom, members of the European Union, Canada, and various Gulf countries, have given Lebanon extensive, albeit insufficient, support to help it cope with the Syrian refugee crisis and to bolster security amid spill-over violence.

The Lebanese Armed Forces and ISF also receive assistance from a range of international donors, including the US, EU, UK, France, and Saudi Arabia. Some of these actors have taken steps to improve the compliance of these forces with international human rights law, but more pressure by the international community remains necessary.