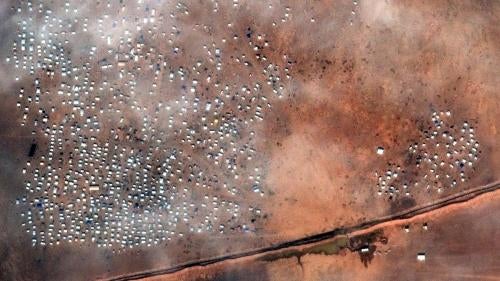 Jordan hosted over 633,000 Syrian refugees in 2015, although authorities tightened entry restrictions and limited new refugee arrivals. The government curtailed freedom of expression, detaining and bringing charges against activists, dissidents, and journalists, sometimes under broad and vague provisions of the country’s counterterrorism law. Authorities replaced the heads of major security agencies in May, but did not publicly demonstrate police accountability for abuses.

Jordanian law criminalizes speech deemed critical of the king, foreign countries, government officials and institutions, as well as Islam and speech considered to defame others.

Jordanian authorities increasingly used counterterrorism provisions to detain and prosecute activists, dissidents, and journalists for speech offenses, relying largely on 2014 amendments to its counterterrorism law that broadened the definition of terrorism and included acts such as “disturbing [Jordan’s] relations with a foreign state.”

In February, Jordan’s State Security Court sentenced a senior Muslim Brotherhood figure, Zaki Bani Irsheid, to 18 months in prison after convicting him of “disturbing [Jordan’s] relations with a foreign state,” based on a Facebook post he authored criticizing the United Arab Emirates (UAE). In June, authorities arrested Eyad Qunaibi, a university professor, over Facebook comments criticizing what he considered un-Islamic social phenomena in Jordan and its cooperation with Israel.

Jordan curtailed media freedom in 2015 by detaining and bringing charges against at least nine journalists and writers, sometimes under broad and vague provisions of the country’s counterterrorism law. These included Jamal Ayoub, a freelance columnist, whom authorities arrested between April 22 and August 17 for writing a column that criticized Saudi Arabia’s bombing campaign in Yemen, and Seif al-Obeidat and Hashem al-Khalidi, journalist and publisher respectively with the Soraya News website, jailed between January 28 and March 8 after the site posted an article on negotiations between Jordan and ISIS over the release of captured pilot Mu`ath al-Kasasbeh.

In 2015, a Ministry of Justice committee issued a proposed penal code overhaul that would amend at least 180 articles of the 1960 law. The draft amendments provided alternatives to imprisonment, such as community service, for the first time, but did not amend or remove articles long-used by authorities to limit free expression.

The State Security Court delivered judgments in cases against political activists and demonstrators arising from protests and social media activism. In most cases, the court threw out the charge of “undermining the political regime,” a terrorism charge under the penal code, and issued convictions on lesser charges carrying three-month jail sentences, which can be substituted with a fine under Jordanian law.

By November 2015, over 633,000 persons from Syria had sought refuge in Jordan since 2011, according to the United Nations High Commissioner for Refugees (UNHCR). Of these, approximately 79,000 were housed at the Zaatari Refugee Camp in northern Jordan, down from over 200,000 in 2013; 27,000 lived in Azraq Camp, 100 kilometers east of Amman; and 6,300 others were at the Emirates Jordan Camp in Zarqa Governorate. The rest were living outside refugee camps.

Beginning in March 2015, Jordanian authorities severely restricted informal border crossings in the eastern part of the country, stranding hundreds of Syrians in remote desert areas just inside Jordan’s border for days and weeks with limited access to food, water, and medical assistance.

Jordanian authorities in 2015 initiated a “re-verification process” for all Syrians living in urban communities, requiring Syrians to prove they had proper documentation and legal status in order to obtain a service card that will later be required to receive humanitarian assistance, access medical care, or enroll children in public schools. The re-verficiation process adversly affected undocumented Syrians and those who left refugee camps irregularly, leading to cases of forced encampment in largely-closed refugee camps.

In May, Jordan endorsed the Safe Schools Declaration, committing to do more to protect students, teachers, and schools during times of armed conflict, including implementing the Guidelines on Protecting Schools from Military Use.

Jordan hosted around 80,000 migrant domestic workers in 2015, mostly from the Philippines, Sri Lanka, and Indonesia. Nongovernmental organizations repeatedly referred domestic workers who had suffered multiple abuses to labor ministry investigators who, however, rarely classified them as victims of the crime of trafficking. Instead, they treated each aspect of abuse, such as non-payment of salaries, separately, sometimes even detaining workers for “escaping” employers.

Jordan’s personal status code remains discriminatory despite a 2010 amendment that included widening women’s access to divorce and child custody. Marriages between Muslim women and non-Muslim men, for instance, are not recognized.

Article 9 of Jordan’s nationality law does not allow Jordanian women married to non-Jordanian spouses to pass on their nationality to their spouse and children. In 2015, authorities began extending special privileges to non-citizen children of Jordanian women, including free education and access to health services in government institutions, as well as provision of Jordanian ID cards and drivers’ licenses. The privileges, however, did not apply to children whose mothers had not resided in Jordan for a minimum of five years.

Penal code articles 98 and 340, which allow reduced sentences for perpetrators of “honor crimes,” remained in force. News reports indicated that at least 10 women and girls were killed by male family members in 2015, including a woman shot four times by her father after leaving her family home and reportedly having a relationship with a man her family refused to let her marry. Authorities arrested her father at the scene.

In December 2014, Jordan revived capital punishment by executing 11 Jordanian men by hanging, ending an eight-year de facto moratorium on the death penalty. Courts had previously convicted all 11 men of murder. On February 4, only hours after the extremist group Islamic State (also known as ISIS) released a video showing its murder of a captured Jordanian pilot, Jordan executed two Iraqis, both long-term death row inmates affiliated with Al-Qaeda in Iraq (AQI), the precursor group to ISIS. All executions were carried out at Suwaqa prison, 70 kilometers south of Amman.

Perpetrators of torture or other ill-treatment appeared to enjoy impunity due to the authorities’ reliance on special police prosecutors and judges to investigate allegations against, prosecute, and try fellow officers. At the Police Court, where many such cases are heard, two out of three sitting judges are serving police officers appointed by the police, and authorities rarely release information on the results of Police Court trials. To date, Human Rights Watch has not received evidence that a police or intelligence officer has ever been convicted of torture under article 208 of the penal code.

In May, Jordan announced the resignation of the heads of major security bodies, including the minister of interior, head of the Public Security Directorate, and head of Gendarmarie Forces. A Jordanian security official told Reuters that the high-level changes stemmed partly from the “heavy-handed police crackdown” in the southern city Maan in recent years, as well as the death of a detainee, Abdullah al-Zoubi, in early May, for which authorities arrested four police officers and later charged three.

Local governors continued to use provisions of the Crime Prevention Law of 1954 to place individuals in administrative detention for up to one year in circumvention of the Criminal Procedure Law. The National Center for Human Rights reported that 20,216 persons were administratively detained in 2014, some for longer than one year.

In August 2015, the European Union granted Jordan €55 million (US$59 million) to help offset the impact of the Syrian refugee crisis in the education sector.

In February, Jordan signed a non-binding, three-year memorandum of understanding with the United States, in which the US pledged to provide $1 billion in aid to Jordan annually, up from $660 million in recent years. The US did not publicly criticize human rights violations in Jordan in 2015, except in annual reports.

In March, Jordan joined the Saudi Arabia-led coalition that launched airstrikes and other military action against Houthi forces in Yemen. Jordan remained a participant in US-led attacks against ISIS and other extremist groups in Iraq and Syria.

In May, the Saudi Development Fund signed two grant agreements with Jordan worth $80 million to finance infrastructure projects for new industrial estates. The grants were part of the $5 billion promised to Jordan by Gulf Cooperation Council countries in 2011 for development projects.