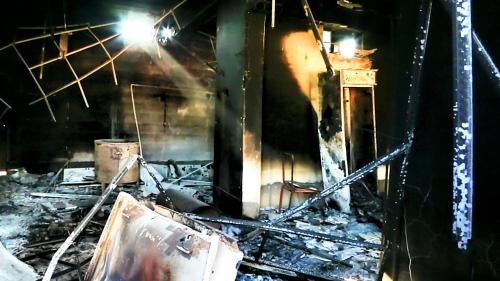 According to the United Nations, summary executions, car bombs, assassinations, artillery shelling, and aerial bombardment killed and injured over 20,000 civilians. Pro-government militias carried out assassinations, property destruction, and enforced disappearances. Since June 2014, the conflict has displaced close to 3.2 million Iraqis, and interrupted school for over 3 million children as well as access to medical care, food, and clean water.

Government forces recaptured the area around Tikrit in March and Beiji in October, and Kurdish forces took Sinjar in November, while ISIS took Ramadi on May 17. Ongoing battles for Ramadi, areas north of Tikrit, and in Diyala, Kirkuk, and Niniveh continue to inflict heavy casualties on both sides.

ISIS claimed responsibility for two devastating bombings that killed over 115 people in Khan Bani Saad, north of Baghdad, on July 17, and 67 people at Jamila Market in Baghdad’s Sadr City, on August 13.

Iraqi media reported ISIS agents killing of thousands of people, sometimes in staged summary executions. On August 7, the forensic medicine department in Mosul said ISIS requested death certificates for 2,070 persons executed in Nineveh province since June 2014. Victims included candidates or elected members of local or national bodies, police, and military. Those executed included scores of former security officers, tribal leaders, and others who refused to pledge allegiance to ISIS, or whom the group suspected of cooperating with the Iraqi government.

On July 1, ISIS reportedly executed 22 members of the Jubur tribe in Badush, north of Mosul.

The reported execution of ISIS’ own fighters also increased in 2015. On May 10, ISIS reportedly executed 20 of its Kurdish fighters in Sinjar and Tell Afar, and on July 10, 40 of its fighters in Hawija for weakness in battle.

Mostly Shia militias fighting ISIS, such as Badr Brigades, League of the Righteous, or Imam Ali Battalions, carried out widespread and systematic violations of human rights and international humanitarian law, in particular, demolishing homes and shops in recaptured Sunni areas.

Peshmerga forces of the Kurdistan Regional Government (KRG) also carried out, or failed to prevent, destruction of Arab homes and looting of shops in areas recaptured from ISIS. Witnesses implicated Peshmerga forces in the wholescale destruction of the village of Barzan, in Zumar district, in September 2014, as well as in nearby Bardiya town, where KRG forces, at a minimum, allowed Kurdish civilians to raze Arab houses.

The central government and KRG, militias, and ISIS on different occasions barred people from fleeing to safer areas. Following ISIS’ capture of Ramadi on May 17, government security forces blocked many of the over 100,000 fleeing residents from crossing into Baghdad province without a local guarantor.

Peshmerga and Asayish forces barred some Arab residents from returning to their villages and towns after they had cleared the area of ISIS. In some areas, such as Rabi’a in Nineveh, returnees required permits.

ISIS tightened its grip on Fallujah and Mosul and prohibited anyone from leaving. Some managed to leave, citing medical reasons and paying bribes of up to tens of thousands of US dollars, or leaving family behind who faced execution if the person failed to return.

ISIS executed over one dozen journalists, including Firas al-Bahar on May 19, Jasim al-Jubur, on May 20, and Suha Radhi on July 7, all in Mosul, the Iraqi Observatory for Press Rights said. In late May, ISIS named five “mercenary so-called journalists led astray,” threatening their lives. In August, ISIS forces tied dozens of Rutba residents to light poles for several days as punishment for publicly protesting the execution of a fellow tribesman, several Iraqi media outlets reported.

Iraqis who publicly criticized officials and corruption faced threats and prosecution. In June, the Publication and Media Court awarded Ala’ Rasul Muhi al-Din, inspector-general of the Electricity Ministry, 3 million Iraqi dinars (US$2,696) for “defamation” by Ibrahim Zaidan, a journalist, after he questioned the inspectorate’s integrity. On July 25, Ala’ al-Subaihawi, a correspondent for Sumeria Satellite TV, faced charges of “spreading false news” for reporting that Maysan’s police chief had resigned. On August 20, 2015, Najaf Deputy Governor Tala Bilal physically attacked Dhiya’ al-Gharifi, editor-in-chief of Najaf Now magazine, because he disliked his article two weeks earlier about workers protesting to be paid.

Since July, Iraqis in large numbers have peacefully protested against a lack of services and corruption. On August 14, several journalists at anti-corruption demonstrations in Baghdad reported that security forces instructed media to stop live coverage. Journalists in Dhi Qar and Karbala governorates received similar orders. On August 21, thugs claiming to be with the Popular Mobilization Forces, the official militia umbrella organization, attacked reporters and camera persons for the TV channels Mada, Sharqiya, and Baghdadiya covering the Baghdad protests. On August 24, the Iraqi Observatory for Press Freedoms registered eight cases of assault, expulsion, threats, and incitement to murder against journalists in Basra, Samawa, Baghdad, and Diyala covering the demonstrations.

Iraqi courts continue to impose the death penalty. In October 2014, the United Nations Assistance Mission for Iraq (UNAMI) and the Office of the United Nations High Commissioner for Human Rights (OHCHR) reported with regard to the death penalty that “persistent and serious flaws remain in the … criminal justice system, notably … violations of due process and fair trial rights.”

In the first KRG execution since instituting a moratorium in 2008, Kurdish authorities in August executed a man and his two wives for the abduction and murder of two schoolgirls in 2011 and 2012. In July, Iraq’s cabinet proposed for parliamentary ratification procedural changes to speed up executions by empowering the justice minister to ratify execution warrants if the president has not done so within 30 days. In August, President Fuad Masum signed 21 execution warrants, but also expressed reservations about the cases of some of more than 700 persons on death row.

In July, Iraq’s Central Criminal Court tried 28 persons for participating in the June 2014 ISIS massacre of up to 1,700 Shia military cadets. The trial lasted only a few hours, and the court sentenced 24 to death, despite defendants claiming their confessions were extracted under torture and that they could not choose defense lawyers.

Accountability for grievous crimes remained weak.  There was no accountability for the abduction and murder of Sheikh Qasim Janabi in February 2015 by suspected Shia militants posing as security officials. Armed men grabbed Janabi, a Sunni sheikh engaged in intersectarian dialogue, in plain daylight with eight others, including his nephew, who survived. Prime Minister Abbadi ordered an investigation, but no suspects had been named or apprehended at time of writing. In Baghdad and Diyala, criminal gangs who Sunni victims say are affiliated with the Iraqi security services and Shia militias carried out uninvestigated assassinations and threats.

In one case, courts held Shia militiamen accountable. Baghdad’s Rusafa Criminal Court in May sentenced to death an unknown number of defendants for their role in the August 2014 massacre of 30 Sunni worshippers at the Musab bin Umair mosque in Diyala province.

In 2015, ISIS reportedly forced Muslim women into marriage with fighters, imprisoning or executing those who refused, and instituting a female “Khansa,” or morality, department to enforce morality codes among women of Mosul.

In June, the Karamsha and Shawi tribes of Basra agreed to settle their dispute over the murder of a Karamsha woman by the Shawi tribe handing over 10 unmarried tribeswomen as compensation. Karamsha men could then marry these women. Civil society pressure and tribal and official negotiations did not undo the agreement, and though no women had been handed over by September, they continued to remain at risk of forced marriage.

The government did not introduce measures to combat illegal arrests, due process violations, and assaults of women, to which security forces subjected many of the over 1,000 women in detention.

The KRG banned female genital mutilation by law in 2011, and several campaigns have since contributed to a decline in its prevalence, although its use continues for about half of all girls in Iraqi Kurdistan, German-Iraqi campaign group WADI reported.

The US-led coalition bombing ISIS positions included France, the United Kingdom, the Netherlands, Belgium, Denmark, Canada, and Australia. Denmark and the US reviewed several airstrikes following allegations of civilian casualties. Germany, Hungary, Italy, and the Czech Republic, among others, also provided military equipment, including to Peshmerga forces. The US remained the largest provider of military equipment to Iraq.

Iraqi militias implicated in human rights abuses used US and Iranian weapons in their operations. The US State Department’s 2014 annual report on end-use monitoring provides only cursory information on withheld military export licenses. Washington has not made available any further information, despite legal requirements that the government make information about suspended units public, to “the maximum extent practical.” In its annual report on export controls for 2014, the European Union noted three denials of licenses to Iraq based on human rights and international humanitarian law concerns.

The US FY16 National Defense Authorization Act tightens obligations on the Defense Department to report on its security aid to the Iraqi government—including on end-user monitoring, suspending support for certain Shia militias, and addressing grievances related to the illicit arrest, detention, and unfair trials.

The UN Human Rights Council in March condemned abuses by ISIS after an OHCHR report earlier that month found that the group may have committed genocide, crimes against humanity, and war crimes. It failed to condemn possible war crimes by government forces.