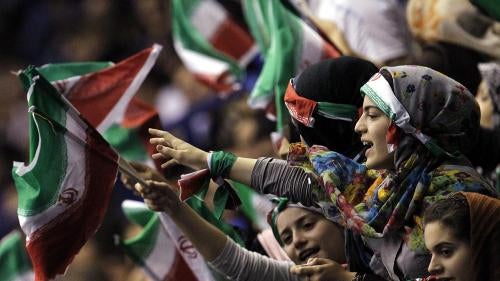 Repressive elements within the security and intelligence forces, as well as the judiciary, retained wide powers and continued to be the main perpetrators of rights abuses. Executions, especially for drug-related offenses, increased sharply from previous years. Security and intelligence forces arrested journalists, bloggers, and social media activists, and revolutionary courts handed down heavy sentences against them.

Authorities executed at least 830 prisoners by hanging as of November 1, 2015, with almost 700 executed in the first six months of the year. Officials also carried out amputations of limbs for crimes such as theft.

Under Iranian law, many crimes are punishable by death, including some that do not involve violence, such as “insulting the Prophet,” apostasy, same-sex relations, adultery, and drug-related offenses. Convicted drug offenders sentenced after flawed trials in revolutionary courts formed the majority of prisoners executed in 2015.

On August 1, a revolutionary court in Tehran sentenced Mohammad Ali Taheri, the leader of a new age spiritual and healing group, to death on the charge of “spreading corruption on earth.” The judiciary had previously sentenced him in 2011 to five years’ imprisonment, 74 lashes, and fines for the same activities. On December 20, a branch of the Supreme Court overturned Taheri’s death sentence, referring his case back to the revolutionary court for retrial.

According to unofficial sources, at least four prisoners executed in 2015 may have been child offenders aged under 18 at the time of the murder and rape crimes for which they received death sentences. Dozens of child offenders reportedly remained on death row and at risk of execution, including Saman Naseem and Salar Shadizadi. Iranian law allows capital punishment for persons who have reached the official age of puberty: nine for girls, 15 for boys.

Alleging ties to armed opposition groups, the revolutionary courts have also handed out death sentences on charges of moharebeh (“enmity against God”). Dozens of others sentenced on terrorism-related charges, including many Iranian Kurds and Baluch, were on death row following trials rife with due process violations. On March 4, prison authorities in Rajai Shahr Prison in Karaj hanged Hamed Ahmadi and five others. A revolutionary court had sentenced all six to death for moharebeh following unfair trials.

On August 26, officials executed Behrouz Alkhani, an Iranian Kurd that a revolutionary court had convicted of moharebeh for his alleged involvement in the assassination of a prosecutor on behalf of the PJAK armed opposition group. The Supreme Court still had to rule on Alkhani’s appeal at the time of his execution.

Security authorities continued to clamp down on free speech and dissent, and revolutionary courts handed down harsh sentences against social media users, including death sentences in some cases. As of December, according to Reporters Without Borders, Iran held at least 50 journalists, bloggers, and social media activists in detention.

In April, an appeals court in Tehran sentenced six social media users to five to seven years in prison for their Facebook posts on charges of “assembly and collusion against the national security” and “insulting the sanctities.” On July 13, 2014, a Tehran revolutionary court had previously sentenced eight Facebook users to a total of 127 years in prison for allegedly posting messages deemed to insult government officials and “religious sanctities,” among other crimes.

On June 1, another revolutionary court sentenced Atena Farghadani to a total of 12 years and 9 months’ imprisonment in connection with a critical cartoon she drew and posted on her Facebook page in August 2014 that depicted members of Iran’s parliament as animals. The charges against Farghadani included “assembly and collusion against the state,” “propaganda against the state,” and insulting public officials. Although by law she should serve no more than seven-and-a-half years, the heaviest single sentence she received, the judiciary compounded her sentence.

On June 8, authorities announced a wave of arrests of social media users and activists who “published illegal invitations on social networks ... [and] had anti-security tendencies.”

On October 11, 2015, a judiciary spokesman announced Washington Post reporter Jason Rezaian's conviction. As of December, court authorities had refused to provide clarification about the specific charges for which he was convicted or the details of his sentence. The sentence came after unidentified agents arrested Rezaian, his wife Yeganeh Salehi—also a journalist—and two unnamed people—a photojournalist and her spouse—on July 22, 2014, and detained them without charge for months without allowing them access to a lawyer. Authorities released Salehi in September 2014.

Scores of people held for their affiliation with banned opposition parties, labor unions, and student groups were in prison. The judiciary targeted independent and unregistered trade unions, and security and intelligence forces continued to round up labor activists and leaders.

Police arrested independent labor activist Reza Amjadi in the Kurdish-majority city of Sanandaj on April 25, Mahmoud Salehi and Osman Esmaili in Saqqez on April 28, and two members of the Union of Workers of the Tehran and Suburbs Bus Company, Ebrahim Maddadi and Davood Razavi, in their homes on April 29.

On July 22, authorities arrested approximately 130 teachers who planned a demonstration in front of the parliament building in Tehran to protest the recent arrest of Esmaeil Abdi, the head of a teacher’s guild, who was arrested for his peaceful activities on June 27. They later released all the teachers without charge.

The authorities continued to imprison dozens of activists and human rights defenders, such as lawyers Mohammad Seifzadeh and Abdolfattah Soltani, on account of their peaceful or professional activities. Judiciary officials continued their efforts to further erode the independence of the Iranian Bar Association and restricted the right of criminal defendants to access a lawyer of their own choosing during the investigation phase of national security cases.

On May 5, authorities arrested Narges Mohammadi, a member of the banned Center for Human Rights Defenders, reportedly because of her continued peaceful activism against the state. In 2010, a revolutionary court sentenced Mohammadi to six years in prison for her rights-related activities, but authorities released her due to a serious medical condition that she still suffers.

On May 10, a revolutionary court informed Atena Daemi, a child and civil rights activist, that it had sentenced her to 14 years in prison on charges that included “assembly, collusion and propaganda against the state” and “insulting the Supreme Leader and religious sanctities” for her peaceful activism.

On August 19, a court acquitted former Tehran Prosecutor Saeed Mortazavi of charges related to the torture and death of three protesters held at Kahrizak detention facility following their arrest during the 2009 post-election protests. Mortazavi has so far escaped criminal punishment despite allegations implicating him in a range of serious rights abuses during his time in public office.

In 2015, authorities sought to introduce or implement discriminatory laws, including restricting the employment of women in certain sectors and limiting access to family planning as part of official measures to boost Iran’s population. On April 22, the Guardian Council, an unelected body of 12 religious jurists, approved a controversial bill that empowers voluntary Basij paramilitary forces to “promote virtue and prevent vice,” including enforcement of the strict Islamic dress code, or hijab, for women. If passed, the bill would empower individuals to act outside of any official capacity and without any parameters for holding them legally accountable.

In August, Iran’s judiciary prevented the release from prison of women’s rights activist Bahareh Hedayat although an appellate court had ordered it. A revolutionary court sentenced Hedayat to seven-and-a-half years in prison in January 2010 for her peaceful activism on charges of “acting against the national security” and insulting public officials.

Regardless of her age, a woman cannot marry without the approval of her male guardian, and generally cannot pass on her Iranian nationality to a foreign-born spouse or to her children. Child marriage—though not the norm—continues, as the law allows girls to marry at 13 and boys at age 15, as well as at younger ages if authorized by a judge.

The government denies freedom of religion to Baha’is, Iran’s largest non-Muslim religious minority, and discriminates against them. At least 74 Baha’is were held in Iran’s prisons as of November 20, 2015. Security and intelligence forces also continued to target Christian converts from Islam, Persian-speaking Protestant and evangelical congregations, and members of the home church movement. Some faced charges such as “acting against the national security” and “propaganda against the state.”

Authorities restrict political participation and public sector employment of non-Shia Muslim minorities, including Sunnis, who account for about 10 percent of the population. They also prevent Sunnis from constructing their own mosques in Tehran and conducting separate Eid prayers.

On July 29, municipal employees destroyed a Sunni prayer hall located in the Pounak district of Tehran that they alleged was functioning without the required permits. The government continued to target members of Sufi mystical orders, particularly members of the Nematollahi Gonabadi order.

The government restricted cultural as well as political activities among the country’s Azeri, Kurdish, Arab, and Baluch minorities. In April, police and security agents rounded up and detained scores of Ahwazi Arabs, including several children, in Khuzestan province. In July, the University of Kurdistan announced it had opened a new department of Kurdish language and literature studies that would accept students for the 2015-16 academic year.

Same-sex conduct between men in Iran is punishable by flogging or the death penalty. Same-sex conduct between women is punishable by flogging. Lesbian, gay, bisexual and transgender people are subjected to official harassment, arbitrary arrest and detention, prosecution, and ill-treatment or torture. Although Iran permits and subsidizes sex reassignment surgery for transgender people, no law prohibits discrimination against them.

Afghan refugees and migrant workers, estimated at between 2.5 and 3 million in number, continued to face serious abuses. Authorities reportedly allowed Afghan children, including undocumented ones, to register for schools after Supreme Leader Ali Khamenei issued a ruling reaffirming the need for universal education.

However, Afghans continue to face barriers to receiving other forms of social services; are at higher risk for arbitrarily being stopped, questioned, and/or detained by authorities; and have little recourse when abused by government or private actors.

On July 14, the United Nations Security Council’s five permanent members, along with Germany and Iran, announced that they had reached a comprehensive agreement to monitor Iran’s nuclear program. The deal paves the way for gradually removing financial and economic sanctions against Iran. On July 28, during EU Foreign Affairs Chief Mogherini’s visit to Tehran, Iran’s foreign minister said Iran and the European Union had agreed to hold talks “over different issues, including … human rights.”

The government continued to block access to Iran by the UN special rapporteur on the human rights situation in Iran, Ahmed Shaheed, and other UN rights experts.