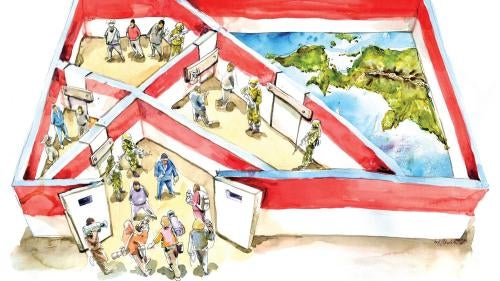 President Joko Widodo’s record during his first year in office was mixed. His administration signaled it would more actively defend the rights of Indonesia’s beleaguered religious minorities, victimized by both Islamist militants and discriminatory laws, but made few concrete policy changes. He granted clemency in May to five of Papua’s political prisoners and released another one in October, but at time of writing had not freed the approximately 70 Papuans and 29 Ambonese still imprisoned for peaceful advocacy of independence.

In May, the president—commonly referred to as Jokowi—announced the lifting of decades-old restrictions on foreign media access to Papua but then did not follow through, allowing senior government officials to effectively defy the new policy without consequences. In August, Jokowi announced that the government would form a “reconciliation commission” to address gross human rights abuses of the past 50 years, but left out the details.

Jokowi’s outspoken support for the death penalty and his decision to make execution of convicted drug traffickers a symbol of his resolve reflected serious backsliding on his reform agenda. Indonesia executed 14 convicted drug traffickers in 2015, including a Brazilian who reportedly had severe mental disabilities, in the face of intense international criticism. Under Jokowi’s predecessor Susilo Bambang Yudhoyono, Indonesia had executed only 20 people in 10 years.

Starting in August and continuing through November, thick haze from fires set during annual forest clearing produced an environmental and health crisis in Sumatra, Kalimantan, Singapore, and Malaysia. In response, the National Police arrested seven plantation executives, including one from Singapore-based Asia Pulp and Paper, and fined dozens of other palm oil companies.

There were 194 incidents of violent attacks on religious minorities in the first 11 months of  2015, according to the Setara Institute, a nongovernmental organization that tracks religious intolerance. That number equals the total for all of 2014, demonstrating that religious violence remains a serious problem.

Minister of Religious Affairs Lukman Saifuddin took steps in 2015 to more actively counter harassment of religious minorities, a welcome change after a decade of passivity and at times complicity by officials. In January 2015, Saifuddin took to Twitter to defend an academic in Aceh province who had been falsely accused of committing blasphemy on campus. In August, Saifuddin announced that his ministry was drafting a bill to ensure religious freedom for all Indonesians, "including those outside the six main religions of Islam, Catholicism, Protestantism, Hinduism, Buddhism and Confucianism.”

On June 15, after the Aceh Ulama Council declared the Gerakan Fajar Nusantara sect to be “heretical,” the Banda Aceh district court convicted the sect’s leader and five members of blasphemy, sentencing them to prison terms of three to four years. In October, local authorities in Singkil regency, Aceh, forced Christians to close 10 churches after Muslim militants burned down one church. A Muslim was shot to death in a clash outside one of the churches.

Also in June, the Constitutional Court rejected a petition to allow inter-religious marriage, ruling that the 1974 Marriage Law was valid because it legalized marriage “in accordance with the respective religious beliefs of the bride and groom.”

On July 8, the South Jakarta district administration ordered the closure of an Ahmadiyah mosque in Bukit Duri in response to pressure from Sunni militants. That same month, three churches were forced to close in Bandar Lampung, Yogyakarta, and Samarinda.

On July 17, ethnic Papuan Christian militants demanded that a mosque in Tolikara district, Papua, not use a loudspeaker to broadcast its Idul Fitri prayer, burning down the mosque and dozens of nearby food stalls when mosque authorities refused to heed their demand. Security officers fired at the protesters, killing one and wounding 11 others.

On September 2, the Islamic People's Forum (Forum Umat Islam), a militant group connected to the Indonesian Ulama Council, declared that Sapta Darma traditional faith believers in Rembang, Central Java, were “blasphemers” and forced them to stop renovations to their temple. Police and government officials refused to intervene and instead persuaded the Sapta Darma to delay the renovations for an unspecified period of time.

Indonesia's official Commission on Violence against Women reported that as of October, national and local governments had passed 31 new discriminatory regulations in 2015, leaving Indonesia with 322 discriminatory local regulations targeting women.

The Indonesian armed forces and police require female applicants to undergo abusive, discriminatory, and unscientific “virginity tests.” After Human Rights Watch research put a spotlight on the issue in 2015, some officials criticized continued use of the tests but did not ban them. “We need to examine the mentality of these [female] applicants. If they are no longer virgins, if they are naughty, it means their mentality is not good,” said Indonesian military spokesman Maj. Gen. Fuad Basya.

In July, the Ministry of Defense issued a regulation allowing male employees to take second wives if their first wives are unable to bear children. The regulation forbids female personnel from practicing polygamy. The United Nations Human Rights Committee has emphasized that “polygamy violates the dignity of women,” constitutes “inadmissible discrimination against women,” and “should be definitely abolished wherever it continues to exist.”

In June, the Constitutional Court rejected a petition to increase the minimum age of marriage for girls from 16 to 18. Only one judge, the sole woman on the nine-member panel, dissented. The Convention on the Rights of the Child, which Indonesia ratified in 1990, defines a child as anyone under age 18, and the CRC Committee has determined that 18 should be the minimum age for marriage regardless of parental consent.

The Jokowi government has sought to take a new approach to the provinces of Papua and West Papua (“Papua”), home to a low-level insurgency and a larger peaceful pro-independence movement. On May 9, Jokowi visited the Abepura prison and released five political prisoners, promising to release other Papuans imprisoned for political crimes in consultation with the parliament. There were at least 45 political prisoners in Papua at the end of September, according to the monitoring group “Papuans Behind Bars.” Papua’s most famous political prisoner, Filep Karma, was released in October.

Meanwhile, suppression of the rights to freedom of expression and association in Papua continued. On May 20-22, police detained dozens of activists of the West Papua National Committee, a pro-independence group, during peaceful rallies in the cities of Jayapura, Manokwari, and Merauke. Police subsequently arrested four of those activists—Alexander Nekenem, Yoram Magai, Mikael Aso, dan Narko Murib—on charges of “public incitement.” In November, they were sentenced to one-and-a-half year jail terms.

New incidents of security force violence also continue to be reported. Two allegedly drunken soldiers opened fire on a crowd in Koperapoka, Mimika regency, on August 27, killing two people and wounding two others. In December 2014, security forces allegedly shot and killed five peaceful protesters in the town of Enarotali; a year later, the government had still not released the results of official investigations into the shootings or arrested any suspects.

On May 10, President Jokowi announced the lifting of restrictions on foreign media access to Papua. A month later, the Foreign Ministry announced the abolition of the “Clearing House” that had screened Papua access applications of foreigners for decades. But numerous senior government and security forces officials balked and openly resisted the change. In August, the Ministry of Home Affairs unveiled a new regulation that would have imposed onerous new reporting restrictions on foreign media nationwide. Jokowi ordered its cancellation the next day. However, the National Police still require accredited foreign journalists to apply for a travel permit to visit Papua, and the Ministry of Foreign Affairs also still requires such journalists “to notify” the ministry of their schedules and activities in Papua.

In June, the government announced it would establish a “reconciliation commission” to seek a “permanent solution for all unresolved human rights abuses,” including the 1965 anti-communist massacres that killed an estimated one million people and numerous other gross human rights violations since that time.

The government did not provide details about how the commission would work, apart from saying it would not conduct investigations into specific abuses but focus on creating a “settlement mechanism” for victims and their survivors. As such, it appeared highly unlikely it would include powers to pursue criminal accountability for the most responsible senior officials, despite continuing demands for justice from victims.

In August Brig. Gen. Hartomo was promoted to become governor of the Military Academy in Magelang. In 2003, Hartomo, then Special Forces commander in Papua, was tried and convicted by a military tribunal for his involvement in the killing of Papuan leader Theys Eluay.

Tens of thousands of Indonesians with psychosocial disabilities spend their lives chained or locked up in homes or institutions instead of receiving community-based mental health care. The government passed a new mental health law in 2014 to address Indonesia’s dire mental health care situation but has yet to implement it.

In May, the government acceded to international pressure and began rescuing boatloads of ethnic Rohingya from Burma and Bangladesh stranded at sea for weeks on poorly provisioned, unseaworthy vessels. Although Indonesia agreed to bring rescued asylum seekers and migrants ashore, it said that they would only be sheltered temporarily and would need to be resettled to third countries after a year.

As of August, there were 13,110 refugees and asylum seekers in Indonesia, all living in legal limbo because Indonesia is not a party to the Refugee Convention and lacks an asylum law. This included 1,095 children detained in immigration centers, of which 461 were unaccompanied minors.

The United States, an important trade partner, continued to seek closer military ties with Indonesia. President Jokowi made his first state visit to the US in October, but it was cut short because of the Asian haze crisis, and neither side publicly addressed human rights issues. Jokowi focused largely on attracting US-based companies to invest more in Indonesia. In April, the US Commission on International Religious Freedom again placed Indonesia in Tier 2, the second worst category, where it has been since 2003.

In June, the Melanesian Spearhead Group, a regional organization largely made up of southern Pacific island nations, gave observer status to the United Liberation Movement for West Papua, the umbrella organization of pro-independence Papuans.