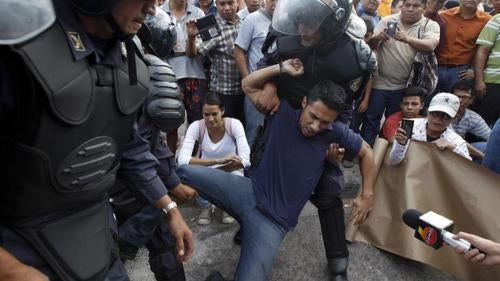 Rampant crime and impunity for human rights abuses remain the norm in Honduras. Despite a downward trend in recent years, the murder rate is among the highest in the world. Efforts to reform the institutions responsible for providing public security have made little progress. Marred by corruption and abuse, the judiciary and police remain largely ineffective.

Journalists, peasant activists, and lesbian, gay, bisexual, and transgender individuals are among those most vulnerable to violence. Government efforts to investigate and prosecute violence against members of these groups made little progress in 2015.

The Council of the Judiciary has ignored due process guarantees in suspending and dismissing judges, thus increasing their vulnerability to political pressures. In December 2012, Congress arbitrarily dismissed and replaced four Supreme Court judges.

The use of lethal force by the national police is a chronic problem. Investigations into police abuses are marred by inefficiency and corruption; little information about them is made public; and impunity is the rule.

Efforts to address endemic corruption within the police force have made little progress. According to police documents cited by the newspaper El Heraldo, some 20 top officers who had been fired for failing confidence tests—including criminal background checks and polygraphs—were in service in mid-2015, as were several officers convicted of criminal activities.

President Juan Orlando Hernández has expanded the military’s role in combating violent crime, although military intervention was first announced in November 2011 as a temporary intervention pending reform of the national police. Allegations of human rights abuses by the military have increased notably since then. Military police were accused of involvement in at least nine killings, more than 20 cases of torture, and about 30 illegal arrests between 2012 and 2014, a Reuters investigation found, and at least 24 soldiers were under investigation in connection with the killings.

Judges face politically motivated intimidation and interference. In December 2012, Congress voted to remove four of the five justices in the Supreme Court’s Constitutional Chamber after the justices ruled that a law aimed at addressing police corruption was unconstitutional. A month after the appointment of four replacements, in January 2013, the new court rejected a legal challenge by the dismissed justices.

In April 2015, at the petition of ruling party legislators, the court struck down a long-standing constitutional prohibition of presidential re-election. The decision will allow President Hernández to run for a second term in 2017 if he chooses to do so. A proposal by former President Manuel Zelaya to call a referendum seeking to revoke the same constitutional prohibition was one of the main reasons the military gave for overthrowing Zelaya in 2009.

The replacement of the four Supreme Court justices was part of a broader pattern of interference. In 2015, lawyers’ groups accused the Council of the Judiciary, which has the authority to appoint and dismiss judges, of using the threat of disciplinary action to intimidate judges and influence judicial decisions.

The selection process for the council, which was established by a 2011 constitutional reform, lacked safeguards to protect against political interference, according to the International Commission of Jurists, and irregularities included the exclusion of representatives from one of Honduras’s two judicial associations. By December 2014, the Council had fired 29 judges and suspended 28, according to the Inter-American Commission on Human Rights (IACHR), although the basis for disciplinary action and the applicable penalties had yet to be defined by law.

Journalists, legal practitioners, and human rights defenders continue to suffer threats, attacks, and killings. Forty-three journalists were murdered between 2010 and 2014, according to the National Human Rights Commissioner (CONADEH). The IACHR received reports of eight more murders of journalists between January and July 2015. In most cases, authorities fail to investigate and prosecute crimes against journalists. By the end of 2014, only 12 cases had been brought to trial, according to the government.

In February 2015, Carlos Fernández, a news presenter for Channel 27—whose offices are on the island of Roatán—was shot and killed on his way home from work. A candidate in local elections in 2013 and a critic of the 2009 coup, Fernández was a member of the opposition party LIBRE and was reported to have received threats in connection with his reporting.

The IACHR received reports of the killing of 86 legal practitioners and 22 human rights defenders between 2010 and 2014.

In May 2015, the government enacted a law to protect human rights defenders, journalists, and legal practitioners. The law creates a 14-member National Council for the Protection of Human Rights Defenders, with representatives from human rights organizations, press associations, and associations of lawyers, judges, and prosecutors, as well as a “protection system” headed by the Secretariat of Justice, Human Rights, Governance, and Decentralization.

More than 90 people have been killed in recent years in land disputes in the Bajo Aguán Valley, most of them since 2009, according to a March 2013 report by CONADEH. Scores more have been victims of attacks, threats, abductions, and police brutality.

The land disputes often pit international agro-industrial firms against peasant organizations over the rightful ownership of lands transferred following a 1992 reform to the country’s agrarian law. While most victims have been peasants, private security guards have also been killed and wounded.

Honduran authorities have been ineffective at investigating abuses or providing protection for those at risk. A Human Rights Watch investigation in 2013 into 29 cases of homicides and two abductions committed in Bajo Aguán between 2010 and 2012 found that none of the cases had been successfully prosecuted. In April 2014, a special prosecutorial unit was set up to investigate the crimes. The unit’s chief prosecutor stated in an August 2015 press interview that it had yet to solve any of them.

Indigenous leaders active on environmental concerns have also suffered violent attacks carried out with impunity. In April 2015, Luis de Reyes Marcía, a member of the Tolupan indigenous community in Locomapa, Yoro–which has opposed local logging and mining activities–was stabbed to death at night in his home. Three other leaders from the same community were shot dead in 2013, and their alleged killers remained at large at time of writing. De Reyes’ wife, Dilma Consuelo Soto, was one of 18 community members who received protection measures from the IACHR following the 2013 killings.

Homophobic violence is a major problem. The IACHR received reports of 174 bias-motivated killings of lesbian, gay, bisexual, transgender, and intersex people from 2009 to 2014. In August 2013, the government set up a special unit in the attorney general’s office to investigate and prosecute such killings and those of members of other vulnerable groups. According to official figures, 10 people had been convicted of such crimes by October 2014; 42 cases had been brought to court.

Children experience high levels of violence, largely perpetrated by armed gangs. Many are recruited into these gangs or are frequently under pressure to join them, according to press reports. Fear of violence drives hundreds of other children every year to leave their homes and head north, often unaccompanied, to Mexico and the United States. A 2014 report by the United Nations Refugee Agency (UNHCR) found that 43 child migrants from Honduras (out of a sample of 98) identified violence by organized armed criminal actors as a motive for leaving their home country. Some migrants who had been deported back to Honduras told Human Rights Watch they were living in hiding and were afraid to go out in public.

Inhumane conditions, including overcrowding, inadequate nutrition, and poor sanitation, are systemic in Honduran prisons. Designed to hold up to 8,600 inmates, the country’s jails were holding more than 15,000 in February 2015 according to the prison service. Corruption among prison officials is widespread. Prison guards in many facilities have effectively relinquished control and discipline to the inmates, which has led to abuses, extortion, and violent confrontations.

In May 2014, Honduras’s human rights performance was assessed as part of the United Nations Human Rights Council’s periodic review process. Honduras agreed to consider a US recommendation that it comprehensively reform its police forces and phase out the involvement of the military in policing duties.

In March 2015, the UN special rapporteur on violence against women, who visited Honduras in July 2014, reported that, despite government reforms, women continued to be discriminated against and subject to violence and sexual and reproductive rights violations.

In June 2015, the Committee on the Rights of the Child published its concluding observations on Honduras’s combined fourth and fifth periodic reports. The committee recommended that Honduras strengthen measures to investigate, prosecute, and sanction cases of death and extrajudicial killings of children.

In October 2015, the Inter-American Court of Human Rights found Honduras to have violated the rights of four judges who were dismissed for opposing the 2009 military coup against former President Zelaya. The court ordered the judges reinstated.

In January 2015, in response to an influx of unaccompanied child migrants to the US, President Barack Obama asked the US Congress to approve an unprecedented US$1 billion in aid to Central American countries. Three hundred million dollars of the aid was aimed at improving police efficiency, backing community-led plans to tighten security, and strengthening prosecutorial capacity to deal with violent crime.

In a 2014 report based on interviews with 35 Honduran migrants in detention in the US or recently deported to Honduras, Human Rights Watch found that virtually all were summarily deported. Of those who expressed fears to US Border Patrol officials about returning, fewer than half were referred for a further assessment of whether their fears were “credible” or “reasonable.”