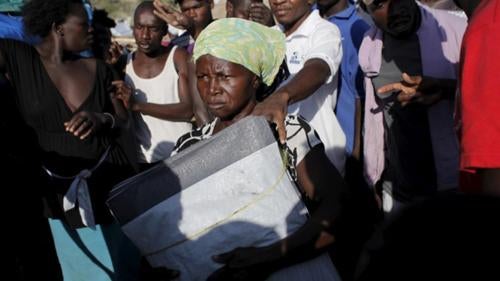 The terms of the majority of lawmakers in Haiti ended in January 2015 without new elections to replace them, shutting down the parliament. While President Michel Martelly governed pursuant to constitutional provisions permitting government institutions to continue operations, the lack of a legislature and protracted political stalemates over elections hindered the Haitian government’s ability to meet the basic needs of its people, resolve longstanding human rights problems, or address continuing humanitarian crises.

As of June, only 3 percent of internally displaced persons (IDPs) living in camps in the aftermath of the 2010 earthquake remained, according the International Organization for Migration. Authorities, however, failed to assist many of the remaining 60,000 IDPs to resettle or return to their places of origin, and many continued to face environmental risks and the threat of forced evictions.

Haiti’s cholera epidemic, which has claimed more than 9,500 lives and infected over 770,000 people in five years, surged in the first four months of 2015 following a significant decrease in 2014. There were more than 20,500 suspected cases and 175 deaths as of August 1.

A controversial regularization plan for foreigners in neighboring Dominican Republic caused an influx of thousands of Haitians and Dominicans of Haitian descent into Haiti; authorities were ill-prepared to meet their humanitarian needs.

At time of writing, nearly all elected national and local positions were open or filled by appointees; the only exceptions were the president and one-third of Haiti’s senators. Negotiations between the provisional electoral council, executive branch, and political parties culminated in a March presidential decree mandating three election dates: first-round legislative elections on August 9; second-round legislative, first-round local and municipal, and presidential elections on October 25; and a presidential run-off election on December 27.

Haitian human rights groups raised concerns about some acts of violence in the pre-election period. They also documented irregularities in the August elections, leading to a repeat of first-round legislative elections in 22 of 119 districts, held concurrently with the first-round presidential elections.

The October 25 elections were mostly nonviolent, but were marked by low voter turnout. Approximately a quarter of registered voters participated and some electoral monitors and watchdogs raised concerns about voter fraud and transparency at voting centers and at the tabulation center where votes were counted. Police fired tear gas at and arrested protesters at recurring protests contesting the first-round presidential results. On November 18, two presidential candidates alleged that police fired on them at a protest, one saying he was struck in the head by a rubber bullet.

Election authorities rejected calls for an independent commission to verify the first-round presidential election votes. Eight presidential candidates, including first-round second place finisher Jude Célestin, issued a joint statement on November 29 stating that fair elections could not take place without reforms to the electoral commission and police, and that, absent such changes, the December 27 elections should be cancelled and a transitional government established to conduct a national dialogue, draft a new constitution, and prepare for free and fair elections at a much later date. The government’s response to the joint statement and outcome of the December elections were not known at time of writing.

Haiti’s prison system remains severely overcrowded with many inmates living in inhumane conditions. Analysts trace much of the overcrowding to high numbers of arbitrary arrests and overuse of pretrial detention (according to the United Nations, more than 70 percent of suspects are held pending trial), which is often prolonged as cases take a long time to come to trial. The UN and other international partners have supported a number of initiatives to address this, including opening new legal aid offices and computerizing the case registry system in one jurisdiction in Port-au-Prince.

The limited capacity of the Haitian National Police (HNP) contributes to overall insecurity in the country. While the government and the United Nations Stabilization Mission in Haiti (MINUSTAH), the UN peacekeeping operation in the country, have made police reform a priority, there have been difficulties training sufficient numbers of entry-level cadets. Training of 1,500 new cadets began in August, along with screening of another 7,700 candidates, suggesting the target number of police could be met by the 2016 deadline.

Barriers to Education and Illiteracy

Approximately one in two Haitians age fifteen and older is illiterate. The UN independent expert on Haiti said in 2015 that action to eradicate illiteracy is one of the top human rights priorities in Haiti.

The quality of education in Haiti is generally low, and 90 percent of schools are run by private entities. Human Rights Watch found in 2014 that even some newly constructed schools lack adequate water and sanitation facilities. The minister of education said in September that the national education budget needed to at least double if his reform efforts were to survive.

Former President Jean-Claude Duvalier, who returned to Haiti in January 2011 after nearly 25 years in exile, was accused of financial and human rights crimes allegedly committed during his 15-year tenure as president from 1971 to 1986.

When the Port-au-Prince Court of Appeal ruled in 2014 that the statute of limitations could not be applied to crimes against humanity, and ordered additional investigation into the charges against Duvalier, victims of serious human rights violations, including arbitrary detentions, torture, disappearances, summary executions, and forced exile, hoped that they might finally see justice. However, Duvalier died six months after the ruling, without ever having been brought to trial. The Human Rights Committee and the UN independent expert on Haiti have both called on Haiti to continue the investigation and bring to justice all those responsible for serious human rights violations committed during Duvalier’s tenure. At time of writing, a reopened investigation into crimes committed by Duvalier’s collaborators was still pending.

Gender-based violence is a widespread problem. Haiti does not have specific legislation criminalizing rape, domestic violence, sexual harassment, or other forms of violence suffered by women. The shutdown of parliament in 2015 prevented any progress towards consideration of a draft law to address this gap in protection.

Use of child domestic workers—known as restavèks—continues. Restavèks, most of whom are girls, are sent from low-income households to live with wealthier families in the hope that they will be schooled and cared for in exchange for performing light chores. Though difficult to calculate, some estimates suggest that 225,000 children work as restavèks. These children are often unpaid, denied education, and physically or sexually abused.

Haiti’s labor code does not set a minimum age for work in domestic services, though the minimum age for work in industrial, agricultural, and commercial enterprises is 15. Most of Haiti’s trafficking cases are restavèks. In 2014, Haiti passed legislation outlawing many forms of trafficking, including hosting a child for the purpose of exploitation.

MINUSTAH has been in Haiti since 2004 and has contributed to efforts to improve public security, protect vulnerable groups, and strengthen the country’s democratic institutions. In January 2015, permanent representatives of the UN Security Council traveled to Haiti for the first time in three years on a mission led by US Ambassador to the UN Samantha Power and Chilean Ambassador Cristian Barros Melet.

In March 2015, MINUSTAH began reducing its personnel, operations, and geographical presence in accordance with a drawdown plan adopted by the Security Council in October 2014. The UN Security Council extended MINUSTAH's mandate through October 15, 2016.

In March and September 2015, the UN independent expert visited Haiti and highlighted the poor conditions that Haitians deported by the Dominican Republic face in camps on the border between the two countries.

In 2012, a member of the 2011 Independent Panel of Experts on the Cholera Outbreak in Haiti convened by the UN secretary-general stated that “the most likely source of the introduction of cholera into Haiti was someone infected with the Nepal strain of cholera and associated with the United Nations Mirebalais camp.”

Responding to the UN’s dismissal of claims for compensation from 5,000 victims of the epidemic, the victims’ representative, the Institute for Justice and Democracy in Haiti, and the Bureau des Avocats Internationaux filed a lawsuit in 2013 before a US court. In January 2015, the case was dismissed. At time of writing, an appeal was pending. To date, there has been no independent adjudication of the facts surrounding the introduction of cholera and the question of the UN’s involvement.

According to figures from the UN Office of Internal Oversight Services, at least 102 allegations of sexual abuse or exploitation have been made against MINUSTAH personnel since 2007, including 7 between January and July 2015.