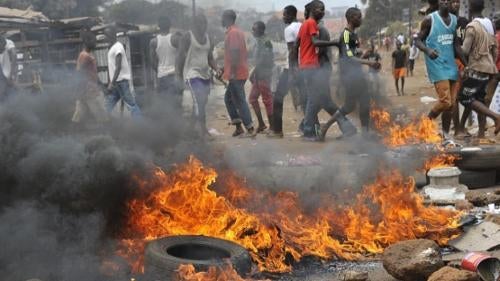 Violence in the months leading up to and following the October presidential elections resulted in some 10 deaths, deepened ethnic tensions, and exposed ongoing concerns about abuses by the security forces. However, during 2015, there was some progress in strengthening the judiciary and rule of law and addressing the serious human rights problems that characterized Guinea for more than five decades.

Reports of human rights violations by security forces declined. However, security forces were implicated in numerous incidents of excessive use of force and unprofessional conduct, including theft and extortion, as they responded to election-related protests.

The government made some progress in the dispensation of justice and in ensuring accountability for past atrocities, including the 2009 stadium massacre of unarmed demonstrators by security forces. However, concerns about prison overcrowding, unprofessional conduct by judicial personnel, and the lack of judicial independence remained.

International actors—notably the European Union, United Nations, France, the Economic Community of West Africa States (ECOWAS), and the United States—actively focused on resolving election-related disputes between the ruling party and the opposition, though they were reluctant to push for progress on accountability. Donors supported programs to address the aftermath of the Ebola health crisis, strengthen the rule of law, and improve discipline within the security sector.

Impunity and Accountability for Crimes

Since 2010, the judiciary has opened several investigations into serious violations by security forces, including the 2007 killing of some 130 unarmed demonstrators; the 2009 massacre and rape of opposition supporters in a Conakry stadium; the 2010 torture of members of the political opposition; the 2012 killing of six men in the southeastern village of Zogota; and the 2013 killing of demonstrators protesting the delay in holding parliamentary elections.

In 2015, investigative judges took steps to move most of these investigations forward, but their efforts were hampered by the failure of some members of the army, gendarmerie, and police to respond to judicial summons. At year’s end, no trials had taken place.

More than six years on, domestic investigation continued into the September 2009 massacre of opposition supporters at a rally in Conakry, largely by members of the elite Presidential Guard. Security force members are implicated in the killing of some 150 people and rape of over 100 women during military rule under Moussa Dadis Camara.

Since legal proceedings began in 2010, the panel of judges appointed to investigate the massacre has made important strides, having interviewed more than 400 victims and charged 14 suspects, including several high-level members of the security forces. Meaningful steps taken in 2015 included the charging of former coup leader Moussa Dadis Camara and his then-vice president, Mamadouba Toto Camara.

Some steps were taken to reverse the striking deficiencies in the judiciary, despite the low operational budget, which remained at around 0.5 percent of the national budget. Unprofessional conduct in this sector, including absenteeism and corrupt practices, contributed to persistent detention-related abuses.

Prisons operate far below international standards. Prison and detention centers in Guinea are severely overcrowded as a result of the systematic use of provisional detention, weak case management, and the failure of the Cour d’Assises—which hears matters involving the most serious crimes—to meet regularly. Guinea’s largest detention facility, designed for 300 detainees, regularly accommodated more than 1200. An estimated 60 percent of prisoners in Conakry are held in prolonged pretrial detention.

Meaningful progress in 2015 was evident in the February adoption of a 2015-2019 judicial reform plan; improved conditions for judges; the sanctioning of several judges for corruption and unprofessional conduct by the newly established Superior Council of Judges (Conseil Supérieur de la Magistrature); progress in the revision of key legal texts—including the penal code, the Code of Criminal Procedure, and the Code of Military Justice—to bring them in line with international standards; the recruitment of some 50 new magistrates; improvements in case management; improvement in the delivery of water and healthcare in Guinea’s largest prison; and the construction, underway, of a new prison envisioned to address overcrowding. The Military Tribunal was also established, though it had yet to begin hearing cases at time of writing.

Efforts to ensure justice for mob and communal violence were accompanied by allegations of a lack of judicial independence. In April 2015, a court sentenced 11 people to life in prison for the mob killing of eight health workers, local officials, and journalists in Womey village, in Guinea’s southern forest region, during the 2014 Ebola outbreak. However, human rights groups said the judiciary failed to investigate the attacks or hold to account members of the security forces implicated in rape, pillage, and other abuses in the Womey incident aftermath.

Similarly, 13 convictions of men implicated in a deadly spate of 2013 communal violence in the southern region of N'Zérékoré, which left some 200 people dead, failed to investigate the role of several politicians perceived to be close to the ruling party in the violence. Judicial bailiffs, responsible for the execution of many judicial decisions, denounced the frequent political interference with their work.

Human rights progress in the legislative framework was evident in the late 2014 adoption of the National Strategy for Justice Sector Reform; the January 2015 establishment of an independent human rights institution as mandated by Guinea’s 2010 constitution, albeit not in line with the Paris Principles; and the June 2015 passage of the Public Order Bill strengthening civilian control over the security services.

Guinea has still not ratified the Optional Protocol to the Convention against Torture and other Cruel, Inhuman or Degrading Treatment or Punishment, or the Optional Protocol to the Convention on the Elimination of All Forms of Discrimination against Women. Furthermore, Guinea has yet to codify the crime of torture into its penal code. Guinea has also not ratified the protocol to the African Charter on Human and Peoples’ Rights on the Establishment of an African Court of Human and Peoples’ Rights.

The Ministry for Human Rights and Civil Liberties, created in 2012, actively promoted respect for human rights, despite budgetary constraints. Minister Gassama Kalifa Diaby visited prisons, liaised with civil society, and advocated for strengthening the judiciary and respecting freedom of the press.

Discipline within and civilian control over the security forces appeared to have improved, and authorities seemed to show slightly increased willingness to sanction those implicated in violations and ensure security force personnel response to judicial summons. The military hierarchy ensured that the army and presidential guard remained in barracks, and those mandated to respond to civil unrest—the police and gendarmerie—did so proportionally and subject to civilian control.

However, in 2015, members of the security forces were implicated in numerous incidents of excessive use of lethal force, resulting in the deaths of several protesters, abusive conduct and the mistreatment of detainees as they responded to protests and criminality. The security forces were also implicated in numerous acts of extortion, bribe-taking, outright theft and banditry, and, to a lesser extent, torture and rape.

The security forces have long demonstrated a lack of political neutrality evident in the use of racial slurs, and failure to provide equal protection to citizens of all ethnic and religious groups, notably those supporting the political opposition.

Guinea’s key international partners, notably the UN, ECOWAS, the EU, France, and the US largely focused on keeping the presidential elections on track, while donors supported programs to address the aftermath of the Ebola health crisis, strengthen the rule of law and improve discipline within the security sector. These actors rarely issued public statements pushing for progress on accountability.

The EU, Guinea’s biggest donor, financed projects in justice, security sector reform, transport, and Ebola relief. In the aftermath of the 2014 Ebola crisis, multiple international donors significantly increased their development aid to Guinea. Additional funding announced in 2015 included €450 (US$749) million from the EU and $37.7 million from the International Monetary Fund, as well as $650 million from the World Bank for Guinea, Liberia, and Sierra Leone. The EU and the UN Development Programme took the lead in providing support to strengthen Guinea’s judicial system and in security sector reform.

The UN Peacebuilding Commission funded programs supporting security sector reform, reconciliation, and conflict prevention in Ebola-affected regions. After the February killing in Conakry of the UN peacebuilding fund coordinator in what the government alleged was a criminal assault, the PBF deployed a mission to Conakry to push for the killing to be investigated.

The International Criminal Court (ICC), which in October 2009 confirmed that the situation in Guinea was under preliminary examination, continued to engage the national authorities on progress in the investigation and the importance of conducting proceedings within a reasonable time frame. ICC Prosecutor Fatou Bensouda visited the country in July to assess progress, marking the second visit by her office in 2015.