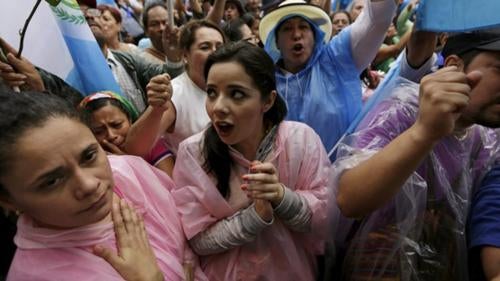 President Otto Pérez Molina resigned in September after being implicated by the United Nations-backed International Commission against Impunity in Guatemala (CICIG) in a million-dollar tax-fraud scandal. The commission was established in 2007 to investigate organized crime and reinforce local efforts to strengthen the rule of law in Guatemala. In 2015, after the Guatemalan Congress voted to strip both President Pérez Molina and Vice President Roxana Baldetti of their immunity, prosecutors charged them and more than 35 other government officials with corruption.

Guatemala’s efforts to promote accountability for human rights atrocities committed during the 1960-1996 civil war have had mixed results. While the Attorney General’s Office has successfully prosecuted several high-profile cases, the vast majority of victims have not seen any form of justice for the violations they endured.

Former Guatemalan head of state Efraín Ríos Montt was found guilty in May 2013 of genocide and crimes against humanity. He was sentenced to 80 years in prison, but several days later the Constitutional Court overturned the verdict on procedural grounds. The retired general had led a military government from 1982 to 1983 during which period the military carried out hundreds of massacres of unarmed civilians.

In August 2015, a trial court declared Ríos Montt mentally unfit for retrial, ruling instead that he should be represented by his lawyers in a special closed-door proceeding that is scheduled to start in January 2016.

In October 2015, an appellate court rejected a two-year old petition by Rios Montt’s attorneys to apply a 1986 amnesty decree that would put an end to his prosecution. The court ruled that the decree, applicable to “all political and related common crimes” committed between March 1982 and January 1986, does not apply to genocide and crimes against humanity.

Guatemala’s Congress passed a resolution in May 2014 denying that acts of genocide were committed during the country’s civil war, despite findings to the contrary by a UN-sponsored Truth Commission in 1999.

In addition to pursuing the case against Ríos Montt, the Attorney General’s Office has, in recent years, convicted several other former members of security forces for human rights crimes committed during the war. Five members of the army’s special forces received lengthy sentences for their role in the 1982 Dos Erres massacre of more than 250 people, and former National Police Chief Héctor Bol de la Cruz received a 40-year sentence for ordering the disappearance of a student activist in 1984.

In July 2014, Felipe Solano Barillas became the first ex-guerrilla to be convicted in connection with atrocities committed during the country’s civil war. Found guilty of ordering the massacre of 22 residents of the town of El Aguacate in 1988, he was sentenced to 90 years in prison.

In November 2014, the government approved a reparations policy and allocated funds to address human rights violations suffered by the communities that were displaced by the construction of the Chixoy Hydroelectric Dam in 1975.

In January 2015, former Police Chief Pedro Garcia Arredondo was sentenced to 90 years in prison for a raid on the Spanish embassy in 1980 in which 37 people burned to death.

The Guatemalan judiciary inaugurated a third “high-risk court” in October 2015 to hear cases of grave crimes, including genocide, war crimes, and crimes against humanity, among others. The new court was opened to help resolve cases more quickly and effectively, and ease the workload of the two existing high-risk courts.

Violence and extortion by powerful criminal organizations remain serious problems in Guatemala. Corruption within the justice system, combined with intimidation against judges and prosecutors, contributes to high levels of impunity. Gang-related violence is also one of the principal factors prompting people, including unaccompanied youth, to leave the country. Frustrated with the lack of criminal law enforcement, some communities have resorted to vigilantism.

Despite such problems, prosecutors in recent years have made progress in cases of violent crime, as well as some cases of extrajudicial killings and corruption—due in significant part to support the Attorney General’s Office has received from CICIG.

In April, a CICIG investigation uncovered a US$130 million tax fraud scandal involving more than 50 high-ranking members of the government that led to charges against then-President Otto Pérez Molina, Vice President Roxana Baldetti, and 35 others.

Acts of violence and intimidation against human rights defenders, journalists, and trade unionists remain a serious problem. More than 70 trade unionists were killed between 2004 and 2015 according to the International Trade Union Conference.

In 2014, 39 journalists were victims of violence, according to the human rights ombudsman. Between January 1 and March 10, 2015, another 20 journalists were subject to attack, the ombudsman reported, and in March, 2 journalists were shot dead by a pair of gunmen in Mazatenango, Suchitepéquez. A third journalist was injured in the attack. At time of writing, three men were awaiting trial for their participation in the killings.

The UN-backed CICIG, established in 2007, plays a key role in assisting Guatemala’s justice system in the prosecution of violent crime. The CICIG works with the Attorney General’s Office, the police, and other government agencies to investigate, prosecute, and dismantle criminal organizations operating in the country. It is empowered to participate in criminal proceedings as a complementary prosecutor, to provide technical assistance, and to promote legislative reforms.

The CICIG’s mandate was scheduled to terminate in September, but in April, then-President Pérez Molina announced that he would request that the UN extend the mandate for an additional two years. The UN confirmed the extension in May.

In Spain, despite a recent ban on universal jurisdiction cases, Judge Santiago Pedraz has said that he will continue investigations of eight Guatemalan officers implicated in human rights abuses during Guatemala’s civil war.

The US State Department, in February, requested that Congress allocate $1 billion in assistance for Central America for 2016, which would represent a nearly three-fold increase in foreign aid to the region. More than 90 percent of the proposed $220 million earmarked specifically for Guatemala would go to civilian institutions to address the underlying risk factors that lead to crime and violence, and to strengthen “rule of law institutions.”

The US continues to restrict military aid to Guatemala on human rights grounds. Before full aid is restored, the US Consolidated Appropriations Act 2014, requires the Guatemalan government to take “credible steps” to implement the reparations plan for communities affected by construction of the Chixoy Dam. It also requires the government to support the investigation and prosecution of military officers implicated in past atrocities and to ensure that the army’s role is limited to combating external threats.