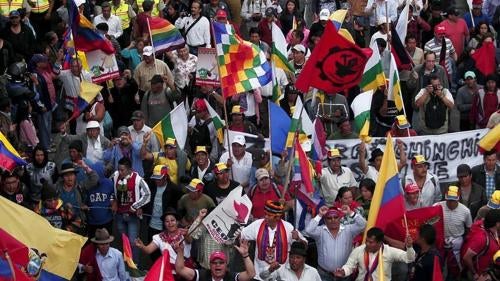 The administration of President Rafael Correa has expanded state control over media and civil society and abused its power to harass, intimidate, and punish critics. In 2015, thousands of people participated in public demonstrations against government policies. Security forces on multiple occasions responded with excessive force. Abuses against protesters, including arbitrary arrests, have not been adequately investigated.

Other ongoing concerns include limited judicial independence, poor prison conditions, and women’s and girls’ limited access to reproductive health care due to fear of prosecution.

Ecuadorian security forces repeatedly used force against peaceful protesters in 2015. In August, a minority of participants in largely peaceful nationwide demonstrations attacked security forces with rocks, sticks, spears, and Molotov cocktails, leaving 116 officers injured. Security forces responded with at times unnecessary and unlawful force, beating or arbitrarily arresting dozens of demonstrators and bystanders, and illegally entering the homes of people who were not participating in the protests.

French-Brazilian journalist and academic Manuela Picq, for example, was demonstrating peacefully in Quito when police officers kicked and beat her. Picq was detained and left the country after her visa was arbitrarily revoked. Manuel Asunción Poma Poma, a resident of Saraguro, Loja Province, said he was leaving a store close to where a demonstration was taking place when security forces attacked him with batons, knocking out five teeth and damaging his jaw.

Authorities charged 130 people for their alleged responsibility in violent incidents but appear to have made no serious effort to investigate officials who used brutal force to disperse anti-government protests, according to information provided by the Attorney General’s Office in October. President Correa congratulated security forces for their performance.

In recent years, prosecutors and judges in Ecuador have charged anti-government protesters with “terrorism” and “sabotage.” A new criminal code that entered into force in August 2014 narrowed the previously vague and overly broad definitions of both offenses, but judges failed to act promptly to use the new provisions to review unjust convictions in cases where high-level government officials signaled satisfaction with the convictions.

In October, the National Court of Justice sentenced five protesters to 18 months in prison for paralyzing public services, accusing them of forcibly entering the offices of Ecuador TV, the public television channel, during a police mutiny in September 2010. The protesters were demanding an opportunity to speak to the public after the government had ordered all stations to transmit Ecuador TV’s programming. Among those convicted was a student who was accused of supporting the group’s actions with his applause.

A 2013 communications law gives the government broad powers to limit free speech. The law requires all information disseminated by media to be “verified” and “precise,” opening the door to censorship by allowing the government to decide what information meets these vague criteria. It also prohibits “media lynching,” defined as “repeatedly disseminating information with the purpose of discrediting or harming the reputation of a person or entity.” In addition, it prohibits what it terms “censorship,” which, under the law’s definition, includes the failure of private media outlets to cover issues that the government considers to be of “public interest.”

The Superintendency of Information and Communication (SUPERCOM), a government regulatory body created by the 2013 Communications Law and separate from the Communications Ministry, has in dozens of cases ordered media outlets and journalists to “correct” or retract reports, or publicly apologize for their contents, including in opinion pieces and cartoons. SUPERCOM has also accused outlets of engaging in “censorship” by not publishing information officials deemed important.

The Correa administration repeatedly used the communications law to order media outlets to publish information favorable to the government. In July, the newspaper El Mercurio reproduced an article by the Spanish news agency EFE on the Pope’s visit to Ecuador with the heading: “Extraordinary Welcome in Quito to Pope Francis and Loud Whistling against Correa.” The communications minister ordered El Mercurio to publish a correction under the headline “Correa Was Not in Papal Motorcade.” SUPERCOM has repeatedly imposed high fines on media outlets that refuse to publish corrections using the exact terms ordered by the Communications Ministry.

Journalists, media outlets, and social media users who openly criticize the government have been subjected to harassment and threats from anonymous sources. In February, an Ecuadorian activist who had posted satirical memes on Facebook and Twitter, including one picturing President Correa at a shopping mall in Europe, received an anonymous death threat after President Correa revealed his identity during the president’s weekly television show; the threat came in a note with a floral arrangement delivered to the house where the activist was staying. The president had previously called on his followers to “join the fight to end abuses in social networks.”

In September, an Ecuadorian TV producer who had worked on multimedia campaigns questioning government policies received anonymous death threats on Twitter and in a note delivered with a floral arrangement to his home. The Attorney General’s Office has failed to adequately investigate the two incidents.

Criminal defamation remains a concern, despite a 2014 legal reform narrowing the definition of the crime. In May, President Correa had a criminal case for contempt opened against three men who he said had slandered him in 2010. They had asked the attorney general to investigate whether the president had broken the law when he ordered an armed assault on a hospital during a 2010 police mutiny. The three fled to avoid prison sentences of up to 18 months, but one turned himself in after his mother became sick and served his six-month sentence. None paid the $180,000 fines they had also been assessed.

Corruption, inefficiency, and political influence have plagued Ecuador’s judiciary for years. President Correa received a popular mandate in a 2011 referendum to fix the problems. As part of his sweeping judicial reforms, however, the Council of the Judiciary appointed and removed hundreds of judges, including all magistrates of the National Court of Justice, through highly questionable mechanisms that have undermined judicial independence.

A 2014 report by three international nongovernmental organizations (NGOs)—the Due Process of Law Foundation, Dejusticia, and the Institute for Legal Defense—documented routine executive interference with judicial decisions, misuse of the penal system to target individuals who question the government's policies, and misuse of the judiciary’s internal disciplinary system to punish judges whose rulings are inconsistent with the Correa administration’s policies.

In 2013 President Correa issued an executive decree that grants the government broad powers to intervene in NGO operations, to the point of dissolving groups on the grounds that they have “compromise[d] public peace” or have engaged in activities that are different from those they identified when registering with the government. That December, the government dissolved the Pachamama Foundation, a highly regarded NGO that had engaged in environmental and human rights advocacy.

In August 2015, President Correa adopted a new decree that maintains his broad powers to regulate and dissolve groups. In September, the Communications Ministry opened an administrative process to dissolve Fundamedios, a local group that monitors free expression, on the grounds that it had engaged in “political” activities by publishing tweets linking to blogs and news articles criticizing the government. Weeks later, after several international monitors, including rapporteurs from the United Nations and the Inter-American Human Rights systems, urged authorities to halt the dissolution process, the ministry withdrew the proceeding. However, in October, it ruled that Fundamedios could not state in its statute that one of its purposes was to defend freedom of expression, arguing that only the state has the power to “respect” and “protect” basic rights.

Activists continue to be subject to prosecution for openly questioning government policies. In February, Javier Ramirez, an activist from Intag, Imbabura Province, who opposes a mining project there, was accused of attacking workers of the mining company, despite compelling evidence that he was home receiving treatment for a knee injury on the day of the attack. He was convicted of “rebellion” and sentenced to 10 months in prison. He was released on the day of his conviction since he had already served his sentence during pretrial detention.

Human rights defenders and lawyers have reported anonymous threats and acts of intimidation. Juan Pablo Albán is a lawyer who represents several victims of abuse during the current and previous governments; a note showed up at his Quito office in October 2014 telling him to “lay off our glorious army and police,” and warning him, using a crude insult, that he would be killed. He told Human Rights Watch that he has noticed cars following him and that, although he is formally under a state-run program to protect witnesses, victims, and lawyers, he has never met or seen any indication of the officers supposedly assigned to protect him.

In July, news sources leaked what appear to be classified government documents showing that the National Intelligence Secretariat conducted illegal surveillance of human rights defenders, environmentalist activists, indigenous groups, academics, and political opponents of President Correa. Under Ecuadorian law, surveillance can only be authorized by a judicial order. The leaked documents include evidence that the intelligence agency sought to trace foreign funding of NGOs and indigenous organizations.

Progress has been slow on efforts to hold Ecuadorian officials to account for human rights violations committed from 1984 to 2008, the period covered by a truth commission set up by the Correa administration. In 2010, a special prosecutorial unit was formed to investigate 118 cases of abuse involving 456 victims, including 68 victims of extrajudicial execution and 17 of enforced disappearance.

At time of writing, prosecutors had brought charges in seven cases, including two in which suspects were convicted, and the National Court of Justice was set to begin hearing Ecuador’s first-ever trial for crimes against humanity.

The right to seek an abortion is limited to instances in which a woman’s health or life is at risk, or when a pregnancy results from the rape of a “woman with a mental disability.” Fear of prosecution drives some women and girls to have illegal and unsafe abortions and impedes health care and services for victims of sexual violence. Fear of prosecution also hinders detection and prevention of sexual and gender-based violence. Official statistics show that one in four women over 15 years old in Ecuador has been a victim of sexual violence.

The government refused to participate in all but one public hearing before the Inter-American Commission on Human Rights and stated that it would not comply with the commission’s recommendations.

In March, the United Nations Committee on the Elimination of Discrimination against Women expressed its concern about women’s limited access to therapeutic abortion and their consequent resort to unsafe abortions, in addition to breaches of confidentiality by health care personnel who report to authorities women who seek an abortion or health care after a miscarriage.

In May, Ecuador endorsed the global Safe Schools Declaration, committing to do more to protect students, teachers, and schools during times of armed conflict, including by implementing the Guidelines for Protecting Schools and Universities from Military Use.

In June, Ecuador donated US$1 million to the Inter-American Court of Human Rights. A month later, members of the Organization of American States appointed Patricio Pazmiño, an Ecuadorian lawyer who continues to serve as a judge on Ecuador’s Constitutional Court, to the court.

In August, the UN special rapporteur on the rights of indigenous peoples called for a fair and impartial investigation into all acts of violence during the August 2015 protests, including claims that police and military forces used excessive force.

In September, the Inter-American Court ruled that Ecuador had violated the rights of a three-year-old girl who was infected with HIV at a public hospital in 1998. The court ordered the government to adopt measures to prevent or address discrimination faced by persons with HIV/AIDS, especially children.

In October, the UN General Assembly elected Ecuador to become a member of the Human Rights Council between 2016 and 2018.