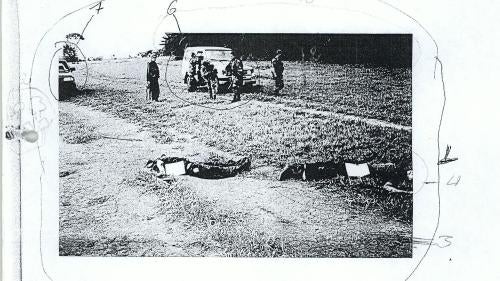 The Colombian government and Revolutionary Armed Forces of Colombia (FARC) guerrillas have engaged in peace talks in Cuba since 2012, and at time of writing had reached an agreement on four of the six items on their negotiating agenda. In June, the government and FARC agreed to create a “Truth Commission” to carry out non-judicial investigations of gross human rights violations and serious violations of international humanitarian law committed during the conflict.

In September, the government and FARC announced an agreement that would create a new Peace Tribunal to try those responsible for gross human rights violations committed during the armed conflict. Under the agreement, those responsible for crimes against humanity and serious war crimes who cooperate with the new judicial system and confess their crimes would spend between five and eight years under “effective restraint of liberty” but face no prison time.

FARC guerrillas continue to attack civilians, although credible evidence suggests that abuses decreased during two unilateral ceasefires agreed on with the government starting in late 2014. There are credible reports that FARC continued to engage in serious abuses, including killings, forced displacement, and threats against civilians in the municipality of Tumaco in 2015. In June, an attack on an oil pipeline in Tumaco left almost 200,000 people with limited access to water for several days and led to complaints of lingering health problems.

The ELN also continues to commit serious abuses against civilians. In the province of Chocó, for example, the ELN has been responsible for kidnappings, killings, forced displacement, and child recruitment. In March, ELN guerrillas released a mayor from that province whom they had kidnapped in December 2014.

The FARC and ELN continued to use antipersonnel landmines in 2015. The government reported that landmines and unexploded ordnances killed 17 people and injured 113 between January and July 2015. In May, after an agreement reached in Cuba, members of FARC and the army started demining the El Orejón zone in Antioquia.

Paramilitaries and their Successors

Between 2003 and 2006, right-wing paramilitary organizations with close ties to security forces and politicians underwent a deeply flawed government demobilization process in which many members remained active and reorganized into new groups.

In Buenaventura, a largely Afro-Colombian port on the Pacific coast, atrocities by paramilitary successor groups that include dismembering victims continued in 2015 despite a “special intervention” initially announced by the government in May 2014 to dismantle the groups. The municipality has one of the highest rates of forced displacement in Colombia, with 22,383 residents fleeing their homes in 2014, and 1,385 between January and September 2015.

Successor groups have also engaged in gross abuses in Medellín. In October, the National Institute of Legal Medicine and Forensic Sciences reported that 24 people had been dismembered in that city in 2015, presumably by successor groups.

Paramilitary successor groups have at times benefited from the tolerance and even collusion of state agents.

Implementation of the Justice and Peace law of 2005, which offers dramatically reduced sentences to demobilized paramilitary members who confess their crimes, has been slow. As of August 2015, only 115 of the more than 30,000 paramilitary troops who officially demobilized had been sentenced under the law, and over 1,000 remained in pretrial detention. The convictions cover a small portion of the nearly 70,000 crimes confessed by the more than 4,000 defendants seeking the law’s benefits.

In November 2014, the Attorney General’s Office obtained its first conviction in a case it designated “high priority” two years earlier. Twelve leaders of a paramilitary group responsible for hundreds of crimes between 1994 and 2004, including enforced disappearances, homicides, and rape, were convicted and sentenced to eight years in prison.

“Parapolitics” investigations into current and former members of Congress accused of conspiring with paramilitaries continued in 2015. As of August, 63 legislators had been convicted of crimes related to “parapolitics” since 2006.

Between 2002 and 2008, army brigades across Colombia routinely executed civilians. Under pressure from superiors to show “positive” results and boost body counts in their war against guerrillas, soldiers and officers abducted victims or lured them to remote locations under false pretenses—such as with promises of work—and killed them, placed weapons on their lifeless bodies, and then reported them as enemy combatants killed in action. There has been a dramatic reduction in cases of alleged unlawful killings attributed to security forces since 2009, though credible reports of some new cases continue to emerge.

The government does not keep statistics for “false-positives” as a category of crime distinct from other types of unlawful killings. However, as of May 2015, the Attorney General’s Office was investigating more than 3,700 unlawful killings allegedly committed by state agents between 2002 and 2008, and had obtained convictions for over 800 of them. Authorities have failed to prosecute senior army officers involved in the killings and instead have promoted many of them through the military ranks.

In June and October, the Attorney General’s Office summoned a total of nine generals, including former army commander Mario Montoya, to testify on their alleged role in false-positive cases. At time of writing, no charges had yet been brought against any of them.

In July, the government replaced the army’s top commander, Gen. Lasprilla Villamizar, who commanded a brigade allegedly responsible for 48 extrajudicial killings. General Rodríguez Barragan, however, continued at time of writing to command the armed forces despite strong evidence implicating him in false-positive killings.

In September 2015, the government and FARC announced an agreement to create a new peace tribunal to try those responsible for gross human rights abuses committed during the armed conflict.

Under the agreement, those responsible for crimes against humanity and serious war crimes who cooperate with the new judicial system and confess their crimes would spend between five and eight years under “special conditions” that would entail “effective restraint of liberty” but no prison time. While the details of the agreement had not been finalized at time of writing, such “special conditions” could fail to provide punishments that reflect the gravity of the crimes as required under international law.

In April, the government dropped legislation intended to expand military jurisdiction, which could have derailed the ongoing prosecution of false-positive cases.

More than 6.8 million Colombians have been internally displaced since 1985, government figures reveal. The government registered more than 180,000 newly displaced people in 2014, and over 37,000 from January to October 2015.

The government’s implementation of land restitution under the Victims’ Law continues to move slowly. The law was enacted in 2011 to restore millions of hectares of abandoned land and land stolen by armed groups and civilians to internally displaced Colombians. At the time, the government estimated that more than 150,000 land restitution cases would be settled by the end of 2015, but as of November, the government had obtained rulings in just 2,983 of the nearly 85,000 claims it had received.

Dozens of land restitution claimants have been murdered, and no one has been held accountable for the majority of those killings.

Gender-based violence (GBV) is widespread in Colombia. Lack of training and poor implementation of treatment protocols create obstacles for women and girls seeking post-violence care and can impede timely access to essential medical services. Perpetrators of GBV crimes are rarely brought to justice.

In 2014, the government enacted a law to improve access to justice and protection for sexual-violence survivors. A challenge by four nongovernmental organizations to a provision of the law making it optional for health providers to use post-rape protocols remained pending before the Constitutional Court at time of writing.

In July 2015, the government enacted a law that created the crime of “femicide”—defined as a murder of a woman because of her gender—and established comprehensive measures to prevent and prosecute GBV, such as creating a special unit at the Attorney General’s Office and establishing victims' right to free and specialized legal assistance.

The Foundation for Free Press (FLIP), a respected Colombian NGO that monitors press freedoms, reported that two journalists were killed and 60 were threatened between January and October 2015. As of August, no one had been charged in the 2013 shooting attack against investigative journalist Ricardo Calderón.

As of February, the government had reported 121 trade unionist killings since 2011, and the Attorney General’s Office had achieved convictions in only six. The National Labor School, Colombia’s leading labor rights NGO, reported 17 new killings between January and August 2015.

The Inspector General’s Office continued its disciplinary investigation against Senator Iván Cepeda, a prominent victims’ rights advocate, for collecting information about possible paramilitary abuses. The investigation, which relates to Senator Cepeda’s interviews of ex-paramilitaries about former President Uribe’s alleged ties to paramilitaries, appears to be entirely unfounded and could have a chilling effect on others who seek accountability for human rights abuses.

In 2011, the Constitutional Court determined that, if by June 2013 Congress had not passed a law recognizing same-sex unions, such couples could go before notary publics and judges to “formalize and solemnize” their union. In the face of congressional inaction and the still unclear status of such unions, the court held a follow-up hearing in July 2015 to address whether same-sex couples should be granted the right to marry under Colombian law. It had not issued a ruling at time of writing.

In November, the Constitutional Court ruled that sexual orientation could not be used to prohibit someone from adopting a child.

The United States remains the most influential foreign actor in Colombia. In 2015, it provided approximately US$280 million, mostly in military and police aid. A portion of US military aid is subject to human rights conditions, which the US Department of State has not enforced; in September, it again certified that Colombia was meeting the conditions.

The Office of the Prosecutor (OTP) of the International Criminal Court (ICC) continues to monitor Colombian investigations of crimes that may fall within the ICC’s jurisdiction. In November 2015, the OTP reported that it would “carefully review and analyse the provisions of the agreement [with FARC], in particular with respect to the restrictions of liberty in special conditions and the inclusion of state agents,” and expressed its concern about limited progress on prosecutions of sexual and gender-based crimes in the ordinary justice system.

In November 2014, the Inter-American Court on Human Rights condemned Colombia for enforced disappearances committed by military troops after the recapture of the Palace of Justice in 1985.

In March 2015, the United Nations Committee on the Rights of the Child expressed concern about the continuing recruitment of children by non-state armed groups and successor groups of the paramilitaries. In May, the UN Committee Against Torture called on Colombia to ensure that military courts do not try military members accused of human rights abuses.