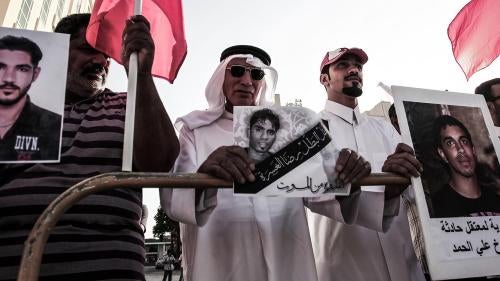 In 2015, further evidence emerged of the torture and mistreatment of detainees, pointing to the ineffectiveness of institutions established since 2011 to safeguard detainees, and the persistent failure of authorities to hold officials accountable for torture and other serious rights violations.

Anti-government protests continued despite a ban on freedom of assembly, and police used excessive force to disperse demonstrators. Authorities continued to restrict freedom of expression, prosecuting high profile activists and opposition figures for speech-related offences and subjecting them to unfair trials. The government used repressive new legislation to arbitrarily strip rights activists and political dissidents of their citizenship, in some cases rendering them stateless. Authorities attributed the deaths of three police officers in two incidents to terrorist attacks.

Torture of detainees continued due to the failure of authorities to implement effectively recommendations for combatting torture that the Bahrain Independent Commission of Inquiry (BICI) put forward in 2011.

Individuals detained at the Criminal Investigations Directorate between 2013 and 2015 described a range of torture methods used there, including electric shock, prolonged suspension in painful positions, severe beatings, threats to rape and kill, forced standing, exposure to extreme cold, and abuse of a sexual nature.

In 2011, the BICI report had identified all of these methods of torture and concluded that the authorities “followed a systematic practice of physical and psychological mistreatment, which in many cases amounted to torture, with respect to a large number of detainees in their custody.”

Bahraini lawyers complained about official practices that have the effect of circumventing the country’s legislative safeguards against torture, particularly the authorities’ failure to divulge the whereabouts of detained suspects, often for weeks at a time.

Former detainees and families of inmates held at Jaw Prison alleged that security forces firing tear gas and bird shot used disproportionate force to quell violent unrest among prisoners there on March 10, 2015. They then subjected inmates to torture and cruel, inhuman and degrading treatment, including forcing hundreds of prisoners to stay outside in open areas, where they beat and humiliated them. One prisoner described how security forces made inmates strip to their underwear and perform exercises while shouting chants in support of King Hamad bin Isa Al Khalifa.

Another described how officers broke an inmate’s collarbone and then left him without medical attention. A group of inmates accused of encouraging the riot were taken to a separate building, where some were severely beaten in toilets and administration rooms, where there are no cameras.

The institutions that the authorities established in response to the BICI report findings and recommendations, in particular the Special Investigations Unit (SIU) and the Ministry of Interior Ombudsman, are still failing to hold security forces and high officials accountable for torture and serious mistreatment of persons in custody.

The SIU has not conducted investigations or prosecutions that have led to the conviction of any individuals for acts of torture in cases relating to Bahrain’s political unrest. The ombudsman, who accepts individual complaints and directs them to the appropriate investigatory authority, did not provide details concerning the 83 cases his office referred to the SIU, so it is unclear how many may have related to allegations of torture.

Freedom of Expression and Fair Trial

Bahraini authorities continued to prosecute individuals, including high-profile activists and opposition figures, for exercising their right to freedom of expression.

In April, authorities arrested the prominent human rights activist Nabeel Rajab after he criticized the authorities on social media. Rajab had repeated allegations that authorities had tortured Jaw Prison inmates in the aftermath of unrest at the jail on March 10, and criticized the Bahraini military’s involvement in the conflict in Yemen.

In May, a court of appeal upheld a six-month sentence Rajab received in late 2014 for “offending national institutions” after he criticized the government on social media for using counterterrorism laws to prosecute human rights defenders and said that Bahraini security forces foster violent beliefs akin to those of the extremist group Islamic State (also known as ISIS).

In July, authorities announced that King Hamad had pardoned Rajab for unspecified health reasons, but at time of writing he still faced charges relating to the comments that led to his arrest in April and remained under a travel ban.

In July, authorities arrested Ibrahim Sharfi, secretary general of the opposition National Democratic Action Society, and accused him of encouraging the government’s overthrow and “inciting hatred” in a speech that consisted solely of peaceful criticism of the government and calls for political reform.

Authorities had released Sharif from prison two weeks earlier, nine months before the end of a five-year sentence. In 2011, a court found Sharif guilty of “terrorism” on the basis that he was one of a group of individuals who chose to “advocate the declaration of a republic in the country.” At time of writing, Sharif remained in pretrial detention with a December 15 trial date.

On June 16, 2015, a Bahraini court convicted Sheikh Ali Salman, secretary general of the country’s largest legally recognized opposition political society, Al Wifaq, of three speech-related charges and sentenced him to four years in prison. The presiding judge refused to allow Sheikh Salman’s defense lawyers to present potentially exculpatory evidence, including recordings of speeches for which he was prosecuted, on the grounds that “the intent of them is to raise doubts about the substantiating evidence that has persuaded the court.” At time of writing, Salman’s third appeal hearing was scheduled for December 12.

In August, the Bahraini cabinet discussed a draft law on “criminalizing contempt of religions,” which would also criminalize “any hate and sectarian discourse that undermines national unity.” At time of writing, the cabinet had referred the draft to the Ministerial Committee for Legal Affairs for further study.

As a result of a 2014 amendment to Bahrain’s citizenship law, the Interior Ministry can, with cabinet approval, revoke the citizenship of any person who, according to authorities, “aids or is involved in the service of a hostile state” or who “causes harm to the interests of the Kingdom or acts in a way that contravenes his duty of loyalty to it.”

On January 31, the minister of interior revoked the citizenship of 72 Bahrainis stating that they had been involved in “illegal acts,” including “inciting and advocating regime change through illegal means,” “defaming brotherly countries,” and “defaming the image of the regime.”

The 72 individuals included former parliamentarians, doctors, politicians, human rights activists, and several Bahrainis alleged to have left the country to join ISIS. The government did not inform the individuals concerned, some of whom are living in exile abroad, of the specific reasons for revoking their citizenship.

Law no. 19 of 2009 on the Promulgation of the Law of Family Rulings regulates matters of personal status in Bahrain’s Sunni courts. It does not apply in the country’s Shia courts, with the result that Shia women, who comprise the majority of women in Bahrain, are not covered by a codified personal status law.

In May, a parliamentary committee called for the repeal of article 353 of the penal code, which allows rapists to escape punishment if they marry their victim. The article was not amended by the end of 2015. In August, the king ratified the Law on Protection from Family Violence, which for the first time provides measures to protect individuals from domestic violence, including requiring authorities to investigate and assist domestic violence victims, and allows public prosecutors to issue temporary protection orders for victims.

In November, Bahrain’s Supreme Council for Women announced the launch of a National Strategy for the Protection of Women from Domestic Violence.

Same-sex conduct is not criminalized in Bahrain. However, there is no law that prohibits discrimination on the grounds of sex, gender, sexual orientation, or gender identity.

Bahrain joined the Saudi Arabia-led coalition that began attacking Houthi forces in Yemen in March. Coalition airstrikes caused thousands of civilian deaths and injuries in Yemen, while a coalition-imposed sea and air blockade threatened to cause widespread starvation.

In June, the United States State Department lifted restrictions on arms sales to Bahrain stating that the government had made “some meaningful progress on human rights reforms,” while acknowledging that the human rights situation was not “adequate.”

In September, 33 states, including the US and the United Kingdom, supported a joint statement at the United Nations Human Rights Council in Geneva—the fifth since June 2012—criticizing Bahrain and calling for the release of political prisoners and for the revision of laws that restrict freedom of expression. Both the US and the UK signed the statement.

On July 9, the European Parliament adopted an emergency resolution on the rights situation in Bahrain, and on the case of Nabeel Rajab in particular. Rajab received a pardon from the king four days later. The US and the UK had also criticized his original conviction.