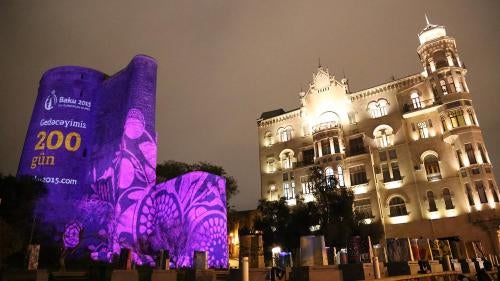 Azerbaijan’s international partners have expressed concern about the trials of government critics and the broader climate of repression, but they have yet to impose concrete consequences to secure rights improvements. Azerbaijan hosted the first European Games in Baku in June, but the European Olympic Committees did not act when Azerbaijan failed to respect Olympic Charter media freedom and human dignity guarantees.

The government continues to bring false charges against critics in politically motivated prosecutions to silence and imprison them. Common charges used by the government include hooliganism, drug possession, treason, and so-called economic crimes. This practice reached a peak in 2015, with dozens of human rights defenders, journalists, political activists, and other critics prosecuted, convicted, or remaining in prison in this manner.

The Yunuses still face treason charges. Their serious, pre-existing health conditions worsened since their 2014 arrests. Both made allegations of ill-treatment in detention, which the government has not investigated. On November 12, the Appeals Court released Arif Yunus on his own recognizance due to his deteriorating health, and in December the same court changed the sentences of both Yunuses to five years’ probation and released Leyla Yunus.

Political analyst Ilgar Mammadov and journalist Tofig Yagublu remained in prison on charges of inciting violence, despite repeated calls by the Council of Europe to release Mammadov following a 2014 European Court of Human Rights (ECtHR) decision on his case, and a November 2015 ECtHR decision finding Yagublu’s detention unlawful.

In August, the Supreme Court upheld a 2014 sentence of five-and-a-half years in prison against Anar Mammadli, the head of the Election Monitoring and Democracy Studies Centre (EMDSC), an independent election monitoring organization.

Azerbaijan’s bar association disbarred or punished several lawyers representing human rights defenders and activists. In several cases, prosecutors summoned lawyers as witnesses in the cases they were representing and removed the lawyers due to alleged conflict of interest. On July 10, a Baku court disbarred human rights lawyer Khalid Bagirov for alleged misconduct after questioning the court’s decision against his client, Ilgar Mammadov. Also in July, a court disbarred Alayif Hasanov, following a defamation suit after he publicized alleged beatings of Leyla Yunus by her cellmate.

The closed trial of Rauf Mirgadirov, an outspoken formerly Ankara-based correspondent arrested in 2014 on trumped-up espionage charges, began in Baku on November 5.

Swiss authorities helped secure the departure of the founder of the Institute for Reporters' Freedom and Safety, Emin Huseynov, from Azerbaijan to Switzerland in June. Fearing a politically motivated arrest, in August 2014 Huseynov sought refuge in the Swiss embassy in Baku, where he remained until his departure.

The daily Azadlig faced imminent closure because of government restrictions on sales, the state-run distributor’s refusal to pay debts to the newspaper, and accumulated defamation fines. In July, authorities detained three relatives of exiled Azadlig editor Ganimat Zahidov. Two were sentenced to 25 and 30 days’ administrative detention on bogus charges. A third remains in custody on drug charges.

In December 2014, parliament approved amendments prohibiting foreign media funding and authorizing the court-ordered closure of any outlet that disseminates incorrect information twice within a year.

Dozens of independent NGOs have been effectively closed since 2014 following prosecutions on laws that severely interfere with NGO operations. A December 2014 report by the Council of Europe’s Venice Commission found that amendments made to Azerbaijan’s Law on NGOs since 2012 “restrict the operations of NGOs in Azerbaijan,” through more stringent registration and reporting requirements, severe penalties, and bans on foreign funding.

Torture and ill-treatment continue with impunity. On August 20, Bahruz Hajiyev died in a Mingechevir police station soon after police detained him for questioning. The Interior Ministry said that Hajiyev threw himself from a window. Hajiyev’s relatives reported that his body showed signs of other violence.

In December 2014, Elshad Babayev died in prison. Babayev’s sister released photographs of the body with apparent signs of violence. Authorities opened a criminal case, but no one has been identified as responsible for his death.

In July and August, Ilgar Mammadov publicly alleged he had been attacked by fellow inmates for refusing to sign a letter of repentance to President Aliyev. In August, the secretary general of the Council of Europe (CoE) sent a letter to the justice minister urging a thorough investigation. Mammadov said that prison officials beat him in October. Authorities failed to effectively investigate.

In April, the United Nations Subcommittee on Torture conducted a visit and found the government did not guarantee “all fundamental legal and procedural safeguards” to prisoners, “including access to a lawyer, a medical doctor, and to contact his or her family.”

The Office for Democratic Institutions and Human Rights of the Organization for Security and Co-operation in Europe (OSCE/ODIHR) refused to send its observation mission to the November 1 parliamentary elections, citing the government-imposed restrictions on the mission. ODIHR had previously said that the election environment was negatively impacted by detentions, lawsuits, and other pressure on journalists. The European Parliament and the OSCE Parliamentary Assembly also refused to send observers. The Council of Europe Parliamentary Assembly’s limited observation mission said the vote was “generally in line with international standards,” but three of its observers dissented, citing the lack of “conditions for holding free and democratic elections.”

With the exception of the European Parliament, European Union institutions and member states have not mounted a unified response to Azerbaijan’s human rights crackdown or imposed consequences for bilateral relations. Negotiations on an EU-Azerbaijan strategic partnership agreement are ongoing.

The EU’s special representative for human rights did not use his February visit to Baku to secure substantive human rights improvements. The EU high representative for foreign affairs and security policy issued statements, including about “disproportionate” sentences, but stopped short of calling for the release of government critics, except for Leyla and Arif Yunus.

The EU’s report on Azerbaijan’s implementation of the European Neighborhood Policy found “regression” on human rights and fundamental freedoms.

The United States State Department issued several statements condemning prosecutions of human rights defenders. In May, media reports revealed that the state-owned oil company, SOCAR, had secretly funded a 2013 trip to a conference in Baku and expensive gifts for 10 US Congress members and 32 of their staff members. Ethics investigations found no evidence that lawmakers or staff knew the Azerbaijani government had funded the conference. Following the trip, a provision favorable to SOCAR and other oil companies was inserted into US legislation. After the investigations, participants returned the gifts.

The Council of Europe human rights commissioner intervened before the European Court of Human Rights on a number of cases, noting “a clear pattern of repression in Azerbaijan against those expressing dissent or criticism of the authorities.”

At the June UN Human Rights Council, 25 states, led by Ireland, condemned the “systematic silencing of critical voices” in Azerbaijan, and called for “immediate and unconditional release” of government critics. On August 20, six UN experts issued a joint statement condemning the Yunuses’ conviction as “manifestly politically motivated” and called for an end to “persecution against human rights activists” in Azerbaijan. In September, the UN high commissioner for human rights condemned the crackdown and called for the release of government critics.

The government forced the OSCE’s already downgraded operations in Baku to close in July. The OSCE special representative on media freedom issued several statements about prosecutions of journalists, the raid on Radio Azadliq, and the death of Rasim Aliyev.

In March, the UN Committee on the Elimination of Discrimination against Women noted legal improvements, including a domestic violence law, and the institution of a minimum age of marriage at 18 years. The committee criticized the delay in ratifying the CoE’s convention on violence against women; a lack of adequate measures to address violence against women and child marriage; as well as restrictive NGO laws and the arrest of and interference with women journalists and activists.

The Extractive Industries Transparency Initiative (EITI) downgraded Azerbaijan’s standing from a “compliant” to a “candidate” country in April, insisting that the government ensure “civil society in Azerbaijan can participate in the EITI in a meaningful way.”