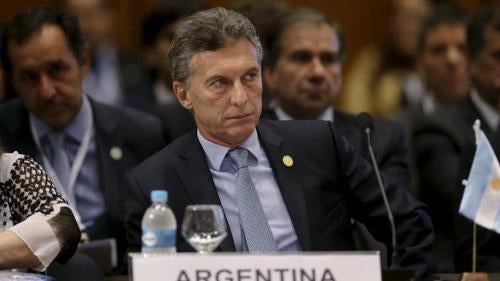 Argentina enjoys robust public debate, but existing and proposed laws threaten free expression, and harassment of judges threatens judicial independence. Prison conditions are poor, police at times use excessive force against demonstrators, violence against women is endemic, access to reproductive services is imperiled, and indigenous peoples do not enjoy the rights afforded to them by law.

Argentina continues to make significant progress regarding lesbian, gay, bisexual, and transgender (LGBT) rights and in prosecuting officials for abuses committed during the country’s “Dirty War” (1976-1983), although trials have been subject to delays.

On December 10, Mauricio Macri began a four-year term as president after winning a run-off election in November.

Twenty-one years after the 1994 bombing of the Argentine Israelite Mutual Association (AMIA) in Buenos Aires that killed 85 people and injured more than 300, no one has been convicted. From the outset, judicial corruption and political obstruction hindered criminal investigations and prosecutions.

The investigation stalled when Iran, suspected by the Argentine judiciary of ordering the attack, refused to allow Argentine investigators to interview Iranian suspects in Argentina. In 2013, Argentina and Iran signed a memorandum of understanding (MOU) to allow an international commission of jurists to review evidence and question Iranian suspects—but only in Tehran.

Because interviews conducted in Iran would likely not be admissible in an Argentine criminal court, a coalition of Argentine Jewish groups mounted a legal challenge against the MOU. The MOU has never been implemented. The perpetrators of the AMIA attack continue to go unpunished.

In January, Alberto Nisman, the prosecutor in charge of investigating the bombing, was found dead in his home with a single gunshot wound to the head. His body was discovered only days after he filed a criminal complaint accusing then-President Cristina Fernández and her foreign affairs minister of conspiring with Iran to undermine the Argentine criminal investigation of Iranian suspects. A pistol matching the wound was found beside the body.

In May, a federal court dismissed Nisman’s complaint, and as of November, the courts had not determined if Nisman was murdered or committed suicide.

In August 2015, a Buenos Aires court began the trial of several officials—including former President Carlos Menem, his head of intelligence, and a judge—for their alleged interference with the initial investigation into the bombing.

In February, former President Fernández castigated the judges and prosecutors who were pressing for a rigorous investigation of Nisman’s death, accusing them of being part of a “judicial party” seeking to “destabilize” the government.

A three-member panel of federal judges was expected to rule on the constitutionality of the MOU with Iran by the end of June. However, on June 25, government supporters in the Council of the Judiciary removed from office one of the three judges, Luis María Cabral, who had been expected to rule against the MOU.

The lawyer whom the council appointed to replace Cabral was suspended from his position weeks later by a higher court, following a legal challenge to the law the council had relied on in making the appointment. In November, the Supreme Court ruled the law unconstitutional, saying it did not provide for proper participation by the executive or legislative branches and undermined judicial independence. At time of writing, the courts had yet to decide on the constitutionality of the MOU with Iran.

Several cases of human rights violations committed during the “Dirty War” waged by Argentina’s military dictatorship (1976-1983) against political opponents were reopened in 2003, after Congress annulled amnesty laws that had been passed in the 1980s. In 2005, the Supreme Court ruled the amnesty laws unconstitutional, and federal judges subsequently struck down pardons favoring former officials convicted of, or facing trial for, Dirty War human-rights violations.

As of June 2015, courts had decided 142 cases of crimes against humanity committed by the dictatorship, resulting in 592 convictions. The Center for Legal and Social Studies (CELS) reported that, as of November, 56 suspects had been acquitted and 2740 had been charged.

Given the large number of victims, suspects, and cases, prosecutors and judges face challenges in bringing those responsible to justice while also respecting the due process rights of the accused. Other concerns include significant trial delays, the failure to capture two convicted military officers who escaped in 2013, and the unresolved fate of Jorge Julio López, a torture victim who disappeared in 2006—a day before he was due to attend the trial of one of his torturers.

Argentina has made significant progress both in identifying children of the disappeared who were illegally abducted and given to other families during the dictatorship, and in reuniting them with their biological families. As of November, 118 children illegally taken from their parents during the Dirty War had been found. The National Bank of Genetic Data, created by the government in 1987, has been of enormous help in his effort, but its usefulness was severely limited by a 2009 law. Local human rights activists have challenged the law, and the case was pending at time of writing.

In December 2014, Congress adopted a law to regulate access to the Internet and telecommunication services. The law establishes that telecommunications are a “public service,” granting the government broad regulatory powers, and creates an implementing body that would have authority to sanction service providers who do not comply with its terms.

An antidiscrimination bill being debated in Congress would grant authorities broad powers to punish “discriminatory acts,” which are defined in vague terms, and would increase criminal penalties for such acts. The bill would also require online news outlets that allow users to post comments to “adopt necessary measures to prevent broadcasting of discriminatory content,” opening the door to prior censorship.

The absence of transparent criteria for using federal funds, and in some provinces state funds, to purchase media advertisements creates a risk of discrimination against media that criticize government officials or policies. The Supreme Court has repeatedly ruled that while media companies have no inherent right to receive public advertising contracts, government officials may not apply discriminatory criteria when deciding where to place advertisements.

In 2009, Congress approved a law that included provisions to increase plurality in the media, and four years later the Supreme Court established parameters regarding how the law should be implemented to protect free expression, including that a diverse range of perspectives should be heard in state-run media programming. So far, the federal agency in charge of implementing the law has not successfully addressed the overwhelmingly pro-government editorial line of state-run media. In 2014, the agency unilaterally tried to limit the number of broadcasting outlets owned by the Clarin Group, the biggest private media group in Argentina. The Clarin Group challenged the government’s proposal, and the case remains pending before the courts.

Police abuse remains a serious problem. Security forces ocassionally employ excessive force against protesters, despite a 2011 commitment by authorities in at least 19 of Argentina’s 23 provinces to ensure that force would be used proportionately. In August 2015, dozens of protesters were injured when local police dispersed a largely peaceful demonstration in the province of Tucumán by firing rubber bullets and beating protesters with batons.

In May, a policeman in Buenos Aires province was convicted of torturing Luciano Arruga, a teenager who was arbitrarily detained in 2008 and whose whereabouts remained unknown until 2014, when his body was found buried in a cemetery in Buenos Aires.

Overcrowding, ill-treatment by guards, inadequate facilities, and inmate violence continue to be serious problems in Argentina’s prisons. The National Penitentiary Office, an official body created by Congress, reported 33 deaths, including 17 violent ones, in federal prisons between January and September 2015. The office also documented 796 cases of torture or ill-treatment in federal prisons in 2014, and 241 cases between January and April 2015. In June 2015, a federal court convicted four officers of the Federal Penitentiary Service for their participation in the torture of a detainee in 2011.

Indigenous people in Argentina face obstacles in accessing justice, land, education, healthcare, and basic services. Argentina lacks a law to protect indigenous peoples’ right to free, prior, and informed consent when the government adopts decisions that may affect their rights.

A 2006 law that requires the government to survey land occupied by indigenous communities is being implemented slowly. Communities are reportedly being evicted from their lands even though the law, as amended, suspends evictions until 2017.

Abortion is illegal in Argentina, except in cases of rape or when the life of the woman is at risk. But even in such cases, women and girls face numerous obstacles to obtaining an abortion. They also have trouble accessing reproductive services such as contraception and voluntary sterilization. These barriers mean that women and girls may face unwanted or life-threatening pregnancies and that they are subject to criminal prosecution for seeking abortions.

In a landmark ruling in March 2012, the Supreme Court determined that prior judicial authorization was unnecessary for abortion after rape, and urged provincial governments to ensure access to legal abortions. The Association of Civil Rights found that as of March 2015, more than half of Argentina’s 23 provinces still had not adopted protocols that met the court’s requirements.

Despite a 2009 law that includes comprehensive measures to prevent and punish violence against women, gender-based violence remains a serious concern, as manifested in June demonstrations throughout the country that were attended by thousands of people demanding reforms to curb such violence. In response, the government agreed to develop a national registry of “femicides and homicides aggravated by gender” and to provide official statistics on the number of women killed nationwide. No such database was available at time of writing.

In 2010, Argentina became the first Latin American country to legalize same-sex marriage. The Civil Marriage Law allows same-sex couples to enter into civil marriages and provides for equal rights and the legal protections of marriage afforded to opposite-sex couples, including adoption rights and pension benefits. Since 2010, nearly 12,500 same-sex couples have married nationwide.

In October 2015, Diana Sacayán, a transgender human rights defender, was found dead in her apartment, according to the Inter-American Commission on Human Rights. Former President Fernández condemned the killing and called for an investigation.

As a member of the United Nations Human Rights Council, Argentina supported UN action to scrutinize human rights violations in North Korea, Sri Lanka, Belarus, Iran, the Occupied Palestinian Territories, and Syria. In 2015, Argentina co-led the development of the global Safe Schools Declaration, whereby states commit to do more to protect students, teachers, and schools during times of armed conflict, including through implementing the UN Guidelines for Protecting Schools and Universities from Military Use during Armed Conflict.

In March 2015, during an informal meeting at the UN Human Rights Council, Argentina and the International Committee of the Red Cross presented a “good practice guide” on the use of forensic genetics in investigations of human rights and international humanitarian law violations.

Prompted by a debt crisis, Argentina pushed for an international framework on debt restructuring, arguing that it would help governments to fulfill certain rights obligations. In September, the UN General Assembly adopted a resolution establishing a set of principles for sovereign debt restructuring, including that negotiations be transparent.