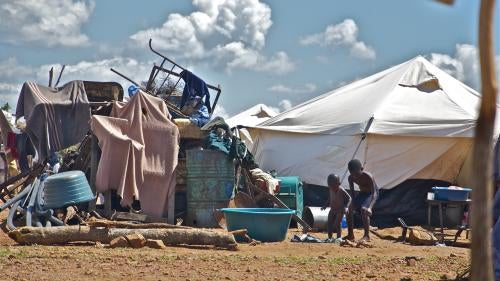 The government of President Robert Mugabe continued to violate human rights in 2014 without regard to protections in the country’s new constitution. An expected legislative framework and new or amended laws to improve human rights in line with the constitution never materialized.

Some 20,000 people, displaced by flooding from the Tokwe-Mukorsi dam in Masvingo province in February, were evicted and resettled with little government protection. They have not received adequate compensation, including land for resettlement, and were pressured to relocate to land with disputed titles. When  displaced people protested in August, over 200 anti-riot police used excessive force and beat and arrested about 300 people; 29 were charged with public violence. At time of writing, the case was still being heard in court.

In the capital, Harare, many people have little access to potable water and sanitation. Police violated basic rights, such as freedom of expression and assembly,using old laws that are inconsistent with the new constitution. Activists and human rights defenders, including lesbian, gay, bisexual, and transgender (LGBT) people, faced police harassment. There has been no progress toward securing justice for human rights abuses and past political violence, including violence after the 2008 election.

The new constitution, which parliament approved in May 2013, enshrines respect for the rule of law, and commits the government to fully implement and realize the right to freedom of association, assembly, expression, and information.

In a landmark ruling on July 22, 2014, the Constitutional Court declared criminal defamation laws unconstitutional based on an interpretation of the old constitution. However, the government has yet to repeal or amend as appropriate other laws, including the Access to Information and Protection of Privacy Act (AIPPA) and the Public Order and Security Act (POSA), the provisions of which severely restrict basic rights. Failure to amend or repeal these laws, and to address the partisan conduct of police, severely limits the rights to freedom of expression, association, and assembly guaranteed in the new constitution and international law.

The Zimbabwe Human Rights Commission (ZHRC), which was established as an independent body under the constitution, is not fully operational due to lack of adequate financial and human resources. The government has failed to strengthen this institution. Its mandate remains narrow and limited to investigating alleged human rights abuses since February 2009. This prevents the commission from investigating previous serious crimes, including election-related violence in 2002, 2005, and 2008; the massacre of an estimated 20,000 people in the Matebeleland and Midlands provinces in the 1980s; and mass demolitions of homes and the evictions of 2005.

In February, the government removed an estimated 20,000 people from the flooding of Tokwe-Mukorsi dam in Masvingo province, through a process fraught with human rights problems. Many activists believe that the displacement could have been done in a manner that minimized suffering, as those displaced lost much moveable property for which they had not been compensated at time of writing.

The government failed to respect and protect the basic rights of those displaced under domestic laws and the African Union Convention for the Protection and Assistance of Internally Displaced Persons in Africa, which Zimbabwe has ratified. Instead of receiving fair compensation for the land they lost and allowed freedom of movement, families were given the choice of tiny plots and becoming farmworkers on a sugar cane plantation, or losing the inadequate aid offered by the government. Should they accept the government’s deal, it is unclear whether they could derive a sustainable living from, or steady tenure over, the plots, whose titles appear to be in dispute.

The government of Zimbabwe continues to violate rights of LGBT people guaranteed in the new constitution and international law, including the rights to non-discrimination; liberty and security of the person and privacy; freedom of expression and thought; association; and peaceful assembly. For instance, it was only after a lengthy court trial that the Harare Magistrates Court in February cleared Martha Tholanah, chairperson of the Gays and Lesbians of Zimbabwe (GALZ), a nongovernmental organization (NGO). She was charged with running an “unregistered” organization in contravention of article 6 of the Private Voluntary Organization (PVO) Act, which requires that all private voluntary organizations register with the PVO board.

In March, police arrested two GALZ officials on charges of organizing a media training workshop without police clearance, in violation of POSA. These attacks on LGBT people, arbitrary arrests of LGBT activists by police, and the harassment by state agents of GALZ in previous years, continue to drive many LGBT people underground.

Presenting the 2014 National Budget in December 2013, Finance and Economic Development Minister Patrick Chinamasa noted that Zimbabwe faced severe socio-economic challenges, which he partly attributed to lack of transparency and accountability in the exploitation of mineral resources, including diamonds.

According to figures released by the International Monetary Fund in June, Zimbabwe’s external debt obligations at the end of 2013 were estimated be US$10.6 billion (over 80 percent of the country’s gross domestic product). The government is failing to achieve greater transparency in diamond production and revenue collection, affecting its ability to invest in desperately needed public services, including essential services such as water, education, health, and sanitation.

Public sector corruption and the deteriorating economy have severely impacted the enjoyment of social and economic rights. By not addressing corruption and other misuse of resources, the government has violated basic rights, such as the right to water and sanitation, of millions of people in Harare, adversely impacting their right to health.

Lack of accountability for past abuses remains a serious problem in Zimbabwe. The government has failed to ensure justice for victims more than five years after the 2008 politically motivated violence in which the ruling Zimbabwe African National Union- Patriotic Front (ZANU-PF), backed by state security forces, committed widespread and systematic abuses that led to the killing of up to 200 people, the beating and torture of 5,000 more, and the displacement of about 36,000 people.

Police frequently misused provisions of POSA to ban lawful public meetings and gatherings. Opposition and civil society activists were wrongly prosecuted and charged under these laws. For instance, when hundreds of Women of Zimbabwe (WOZA) members marched to petition parliament over the national economic situation on February 13, police violently broke up the march and dispersed the demonstrators.

In January, police arrested five activists from four NGOs—Chitungwiza Residents Trust, Combined Harare Residents Association, Centre for Community Development in Zimbabwe Trust, and Zimbabwe Human Rights Association—for participating in a demonstration in Chitungwiza. They were later released without charge. Also in January, police arrested 12 leaders of the Zimbabwe National Students Union. The students, who were beaten in police custody, were arrested during a demonstration against poor education standards at Harare Polytechnic College.

On June 28, police in Victoria Falls arrested and detained for two days four members of the Bulawayo Agenda organization on charges of contravening POSA by allegedly failing to notify police of their public meeting. The court acquitted the four.

In July, authorities in Nyanga and Gweru separately charged the leader of the opposition political party Transform Zimbabwe, Jacob Chengedzeni Satiya Ngarivhume, with violating POSA for allegedly holding political meetings without police clearance. Ngarivhume was later acquitted in the courts.

In August, Zimbabwe took over the leadership of the Southern Africa Development Community (SADC), the 15-nation regional economic institution, for a year. Zimbabwe’s poor human rights record could weaken the regional body’s ability to press for human rights improvements across southern Africa.

The European Union and other international donors in 2014 continued their policy of re-engagement with the government of Zimbabwe. This policy may have contributed to the failure of donors to publicly confront the government over its poor human rights record and to press it to respect and protect everyone’s rights.