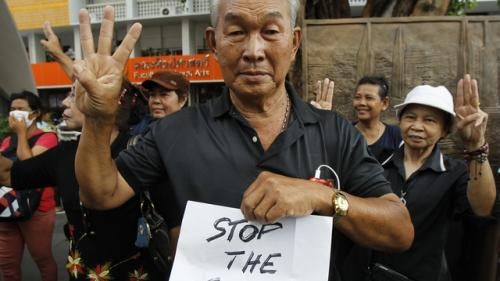 The military staged a coup on May 22, 2014, establishing the National Council for Peace and Order (NCPO) junta and sending Thailand’s human rights situation into free fall. The NCPO has severely repressed the rights to freedom of expression, association and peaceful assembly, detained hundreds mostly without charge, and tried civilians in military courts with no right to appeal.

Attempts in November 2013 by then-Prime Minister Yingluck Shinawatra’s government to pass a blanket amnesty for all those responsible for political violence and corruption since 2004 sparked mass protests in Bangkok and other provinces. Suthep Thaugsuban, former secretary-general of the Democrat Party, mobilized the People’s Democratic Reform Committee (PDRC) to occupy major government buildings and business districts in Bangkok for months.

PDRC and its allies obstructed the general election in February, occasionally with violence, leading to political impasse. Street battles between PDRC’s supporters, pro-government groups, and the police, as well as militia attacks on PDRC’s protest sites, resulted in at least 28 dead and more than 800 wounded.

On May 20, army chief Gen. Prayuth Chan-ocha announced that the Martial Law Act of 1914 would be enforced throughout Thailand to prevent imminent riots arising from what he claimed were increasingly violent political confrontations. On May 22, General Prayuth staged a coup and arrested representatives of opposing political factions attending military-brokered negotiations at the Army Club in Bangkok after the caretaker government of Niwatthamrong Bunsongpaisal refused to resign.

On August 21, the junta-appointed National Legislative Assembly approved General Prayuth as Thailand’s 29th prime minister while permitting him to retain his chairmanship of the NCPO.

Under a junta-promulgated interim constitution, the NCPO has broad authority to limit or suppress fundamental human rights, and is granted immunity for its actions.

Prior to the coup, PDRC supporters targeted journalists considered to back the Yingluck government. On May 7, PDRC security guards assaulted Nick Nostitz, a German freelance photojournalist. Two days later, thousands of people protesting the Yingluck government aligned with the PDRC to besiege major TV stations in Bangkok, harass reporters and prominent news presenters, and demand that the stations cease broadcasting information from government sources.

The NCPO ordered print media not to publicize commentaries critical of the military. TV and radio programs were instructed not to invite guests who might comment negatively on the situation in Thailand. On July 26, the NCPO threatened to prosecute the weekly magazine Phu Jad Karn Sud Sapda if it continued to publish stories alleging military cronyism and corruption.

The junta has blocked more than 200 websites—including the Thailand page on the Human Rights Watch website—as threats to national security.

The NCPO has banned public gatherings of more than five people and prohibits alleged anti-coup activities. Protesters who have expressed disagreement with the junta through public acts of defiance—such as by showing a three-finger salute used in the movie “The Hunger Games,” putting duct tape over their mouths, reading George Orwell’s novel 1984 in public, or playing the French national anthem, “La Marseillaise”—have been arrested and sent to military courts, where they could face up to two years in prison.

The junta also perceives political discussions and debates to be a threat to stability and national security. On September 18, the NCPO ordered shut down a “Democracy Classroom” seminar at Thammasat University, and police detained the speakers for several hours. On September 2, the NCPO ordered the cancellation of a discussion on human rights at the Foreign Correspondents Club of Thailand.

Criticizing the monarchy is a serious criminal offense in Thailand. Persons charged with lese majeste (insulting the monarchy) are routinely denied bail and held in prison for many months awaiting trial. In most cases, convictions result in harsh sentences. In September 2014, Prime Minister Prayuth publicly stated that a top NCPO priority is to prosecute critics of the monarchy. Since the coup, at least 14 new lese majeste cases have been brought to the Bangkok Military Court and criminal courts around Thailand.

On July 31, the Ubon Ratchathani Court sentenced a 27-year-old man to 15 years in prison for posting messages on Facebook deemed insulting to members of the royal family. On September 19, the Appeals Court upheld the Bangkok Criminal Court’s sentence against Somyot Prueksakasemsuk of 11 years in prison for publishing two articles in his magazine that made negative references to the monarchy.

Since the coup, the junta has detained more than 300 politicians, activists, journalists, and people that it accused of supporting the deposed government, disrespecting the monarchy, or being involved in anti-coup protests and activities.

The NCPO held people in incommunicado lockup in military camps. Some have been held longer than the seven-day limit for administrative detention provided for under martial law. Kritsuda Khunasen, a United Front for Democracy against Dictatorship (UDD) activist, was arrested by soldiers on May 27, in Chonburi province and held incommunicado until June 24.

Kritsuda alleged that soldiers beat her during interrogation and suffocated her with a plastic bag until she lost consciousness. Thai authorities quickly blocked access to an interview she gave on YouTube and to an English language online article about her case. There has been no official inquiry into Kritsuda’s allegations or other reports of mistreatment in military custody.

The NCPO has refused to provide details about the release of detainees, many who were held without charge, and continues to arrest and detain others. Persons released from military detention are forced to sign an agreement that they will not make political comments, become involved in political activities, or travel overseas without the junta’s permission. Failure to comply could result in a new detention, a sentence of two years in prison, or a fine of 40,000 baht (US$1,250). The junta canceled passports of at least 10 dissidents—including Japan-based academic Pavin Chachavalpongpun—and issued arrest warrants after they failed to report to the NCPO when summoned.

At least 90 people died and more than 2,000 were injured in the 2010 political violence. The large majority of casualties resulted from unnecessary or excessive use of lethal force by soldiers. Elements of the UDD, popularly known as the Red Shirts, were also responsible for deadly armed attacks against soldiers, police, and civilians.

Court inquests found that soldiers fatally shot 15 of the victims. The soldiers were acting under orders of then-Prime Minister Abhisit Vejjajiva and Deputy Prime Minister Suthep Thaugsuban. On August 28, 2014, the Bangkok Criminal Court ruled that it had no jurisdiction to try Abhisit and Suthep for premeditated murder on the basis of command responsibility because they were political officeholders at the time. No military personnel have been charged for the killings.

The NCPO has expedited the investigations into 2010 violence by the UDD-linked “Black Shirt” militants, leading to many arrests. However, despite clear photographic and other evidence, only a handful of violent crimes committed by supporters of the PDRC and its allies in 2013 and 2014 have been investigated. At time of writing, the April 23, 2014 murder of Kamol Duangphasuk, a prominent poet and Red Shirt political activist, remained unresolved.

The NCPO halted payment of financial reparations—initiated by the Yingluck government as part of political reconciliation measures—to all those harmed by the 2010 violence.

Since January 2004, more than 6,000 ethnic Thai Buddhists and ethnic Malay Muslims have been killed in the armed conflict between separatist groups and the government in Thailand’s southern border provinces. In the past year, the peace dialogue between the Thai government and the Barisan Revolusi Nasional (BRN) movement made no headway.

Thai security forces have not been prosecuted for illegal killings and other abuses against ethnic Malay Muslims, leading to further radicalization of separatists and their supporters. The Fatoni Fighters (also known as Pejuang Kemerdekaan Fatoni), insurgents in the loose BRN network, regularly targeted civilians in bomb attacks, roadside ambushes, drive-by shootings, and assassinations. Separatists have killed at least 175 teachers during 10 years of insurgency.

Prominent ethnic Karen activist Por Cha Lee Rakchongcharoen, known as “Billy,” was forcibly disappeared after officials at Kaengkrachan National Park arrested him on April 17, 2014 in Petchaburi province. At time of writing, there was no progress in police investigation to locate Billy and bring those responsible for his disappearance to justice.

Thailand signed the International Convention for the Protection of All Persons from Enforced Disappearance in January 2012, but has taken no steps to ratify the treaty. The penal code does not recognize enforced disappearance as a criminal offense. Thai authorities have failed to make a priority of solving any of the 64 known cases of enforced disappearance, including that of prominent human rights lawyer Somchai Neelapaijit, who was disappeared 10 years ago.

The Thai military and private companies used defamation lawsuits to try to silence human rights defenders and make it more difficult for victims to voice their complaints.

On August 8, 2014, the army’s 41st Task Force in Yala province filed defamation suits against the Cross Cultural Foundation and its head, Pornpen Khongkachonkiet, for allegedly damaging the army’s reputation by publishing in May 2014 an open letter exposing torture of an ethnic Malay Muslim man by a paramilitary unit.

Chutima Sidasathian and Alan Morison, journalists from the online newspaper Phuketwan, were put on trial on May 26 for defamation and breach of the Computer Crimes Act for publishing a paragraph from a Reuters special report on Rohingya boatpeople. The Thai navy publicly said it initiated the complaint because the article contained a passage implicating navy personnel in human trafficking.

On October 29, 2014, the Prakhanong Court in Bangkok dismissed criminal defamation charges filed by Natural Fruit Co. Ltd., one of Thailand's biggest pineapple processors, against labor activist Andy Hall regarding a report he co-wrote alleging serious labor rights abuses at one of its factories. Hall still faces more serious charges under the Computer Crime Act, which carries prison terms of up to seven years on each count.

Prime Minister Prayuth announced in July 2014 that the 140,000 Burmese refugees living in camps in Thailand near the Burmese border would not be forced to return home against their will. However, Thai authorities imposed tighter restrictions on all camp residents and intensified scrutiny on unregistered camp residents, who comprise around 40 percent of the population and whom successive Thai governments have effectively blocked from being considered for refugee status, sparking fears in the camps of possible mass expulsions.

Thailand is not a party to the Refugee Convention and has no law that recognizes refugee status. Asylum seekers, including ethnic Rohingya from Burma and ethnic Uighurs from China, who are arrested often face long periods of detention until they are accepted for resettlement or agree to be repatriated at their own expense. Child migrants, asylum seekers, and other migrants are regularly held indefinitely in squalid immigration facilities and police lock-ups.

The NCPO has shown no interest in launching criminal investigations of extrajudicial killings related to anti-drug operations, especially the more than 2,800 killings that accompanied then-Prime Minister Thaksin Shinawatra’s 2003 “war on drugs.”

Drug users are sent to “rehabilitation” centers, mostly run by the military and the Interior Ministry, where “treatment” consists mainly of military-style physical exercise, but little or no medical assistance for drug withdrawal symptoms.

The May coup drew condemnation from the United Nations and Thailand’s major allies, including the United States, Europea Union, and Australia, which downgraded their relationship with Thailand in 2014.

Following the coup, the US blocked US$4.7 million in military aid and in June uninvited Thailand from participating in its largest international maritime military exercise that took place in Hawaii. In October, the US announced plans to scale back its annual “Cobra Gold” military exercise in 2015 but did not  cancel it. In contrast, China did not criticize the coup, earning it public praise from the NCPO, which also benefited from Beijing’s continued unconditional political, military, and economic support.

In June, the US State Department downgraded Thailand to a Tier 3 ranking on its 2014 Trafficking in Persons Report for failing to combat human trafficking.

Thailand lost its bid for  election to a seat on the United Nations Human Rights Council for 2015-2017.

The UN Thailand country team has yet to establish a monitoring and reporting mechanism for grave violations against children, as is the norm in conflict situations where violations such as attacks on schools and teachers and recruitment of children, occur.