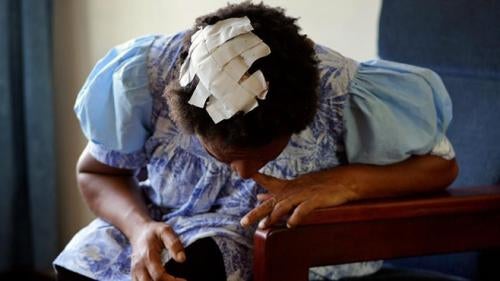 Despite Papua New Guinea’s (PNG) current extractives-led economic boom, an estimated 40 percent of the country lives in poverty. Pressing human rights issues include gender inequality, violence, corruption, and excessive use of force by police. Rates of family and sexual violence are among the highest in the world and perpetrators are rarely prosecuted.

In 2014, in a blow to rule of law and accountability, Prime Minister Peter O’Neill sacked key officials and disbanded the country's main anti-corruption body in response to efforts to arrest him for his alleged involvement in a multi-million dollar corruption case.

Physical and sexual abuse of detainees—including children—by police and paramilitary police units continues to be widespread. In March, a videotape surfaced of police officers surrounding and unleashing three dogs on a defenseless man. Police officials later condemned the abuse and said the incident was being investigated.

Members of PNG’s notorious paramilitary police units (Mobile Squads), detention center staff, and local residents were implicated in excessive use of force in quelling protests in February 2014 at the Manus Island detention center, which holds asylum seekers transferred by Australia for refugee status determination and resettlement. During the incident, many detainees sustained injuries and one detainee was beaten to death. Police allegedly entered firing their guns when violence broke out inside the facility. One detainee was reportedly shot in the buttocks. In May, then PNG Deputy Police Commissioner Simon Kauba denied any involvement of PNG police in the violence. At time of writing, authorities had arrested two local men working in the detention center in connection with the murder.

In October, Prime Minister O’Neill highlighted the problem of police brutality, admitting that the PNG police force lacks discipline and is not sufficiently serving the interests of the people of PNG. O’Neill announced that a hotline will be established for members of the public to report instances of police abuse.

Violence and Discrimination against Women and Girls

PNG is one of the most dangerous places in the world to be a woman, with an estimated 70 percent of women experiencing rape or assault in their lifetime. While such acts have long been criminalized and domestic violence was specifically proscribed under the 2013 Family Protection Act, few perpetrators are brought to justice. Lack of access to courts and police, as well as failure by many justice officials to take violence against women seriously, contribute to the extremely low arrest and conviction rates. The 2013 law presents an important opportunity to improve the situation, but the government must fully commit to its full enforcement and allocate the resources necessary to do so.

Reports of violent mobs attacking individuals accused of “sorcery,” the victims mostly women and girls, continue to be reported. The instigators of such attacks rarely face justice, with few witnesses coming forward. In April, six people, including two children, were hacked to death when 500 men went on a sorcery hunt in Madang Province. Police arrested at least 180 suspects but police say they lack funds to complete investigations.

Following PNG’s 2013 expansion of the scope of crimes eligible for the death penalty and signaling its intention to resume executions, 14 prisoners were on death row at time of writing, but no executions had taken place. In March, UN expert Heyns urged PNG not to use the death penalty and pursue instead other measures including more effective policing of violent crimes.

In June, following investigations by Taskforce Sweep, the PNG police fraud squad filed a warrant for the arrest of Prime Minister O’Neill for his alleged role in approving fraudulent payments from the PNG Finance Department to a Port Moresby law firm. O’Neill then sacked the attorney general and deputy police commissioner and ordered the disbandment of the taskforce. The Police Commissioner was arrested and convicted on contempt of court charges and subsequently retired. O’Neill’s lawyers won a stay of the warrant for his arrest and Sam Koim, the head of Taskforce Sweep, obtained a National Court order preventing the government from disbanding it. At time of writing, the Justice Ministry was withholding Koim’s pay in an apparent attempt to induce him to resign.

Extractive industries are an important engine of PNG’s economic growth, but continue to give rise to serious human rights problems and environmental harm. Controversy raged around the alleged environmental impacts of the long-troubled Ok Tedi mine in 2014, and violent clashes erupted around the controversial Ramu Nickel project.

In 2011, Human Rights Watch documented gang rape and other violent abuses by private security personnel at PNG’s Porgera gold mine, operated by Canadian company Barrick Gold. Along with other steps, Barrick responded by rolling out a compensation scheme that paid out claims to more than 100 women in 2014. Barrick’s efforts on this front have been dogged by controversy, but could mark an important global precedent, particularly if they result in lasting positive outcomes for the women involved.

The government deployed security forces to Porgera and other restive areas of the highlands in 2014 as part of a state of emergency. This led to allegations of violent abuses including the destruction of homes around Porgera—allegations that mirror abuses linked to similar deployments in the past.

PNG’s massive US$19 billion Liquefied Natural Gas (LNG) project, led by ExxonMobil, began production in 2014. The project could ultimately double the size of PNG’s economy. The project has transformative potential but there are serious concerns as to whether ordinary citizens will derive any benefit from it. Key government institutions remain plagued by corruption and a questionable capacity to deploy the additional resources effectively.

Australia remains the country’s most important international partner, providing an estimated US$460 million in development assistance for 2013-2014. Australia provided an additional $556.7 million this financial year to support the Manus Island detention center.

Since 2013, Australia has transferred asylum seekers arriving irregularly by boat in Australian waters to PNG for refugee status determination. Those recognized as refugees are to be resettled in PNG or in a third country other than Australia. At time of writing, 1,084 men were detained on Manus Island and PNG immigration officials had completed 104 interim refugee determinations, 56 of which were positive. In November, PNG’s immigration minister announced the first 10 final positive refugee determinations. At this writing, the 10 refugees were to be released on temporary visas issued initially for a period of 12 months. The PNG government has yet to formulate a policy to permanently integrate refugees and Australia has not yet found third countries willing to admit refugees transferred from PNG.

The facilities on Manus Island are overcrowded and dirty, and asylum claims are not processed in a fair, transparent, or expedient manner, contributing to detainee physical and mental health problems. Safety is also a concern. In February 2014, an Iranian asylum seeker, Reza Berati, was killed during a riot at the Manus Island facility. Two former detention center staff have been charged with his murder, and in March 2014, an inquiry into the incident was referred to the Australian Senate Legal and Constitutional Affairs Committee.

In a senate inquiry submission in May, the UN Refugee Agency (UNHCR) told the senate committee that PNG and Australia are failing to provide safe and humane conditions for asylum seekers in detention and that the lengthy delays in refugee status determinations and lack of timeframes for durable resettlement amount to punishment for affected asylum seekers.

In March, UN expert Heyns expressed regret that representatives of the private security firm G4S, which runs the detention center, were not available to meet him, and that he was refused access to the center and was unable to meet with asylum seekers.

At time of writing, the Australian government had deployed 73 Australian federal police officers to act as unarmed advisers to the Royal PNG Constabulary in Port Moresby and Lae to help combat high levels of violence in the country.